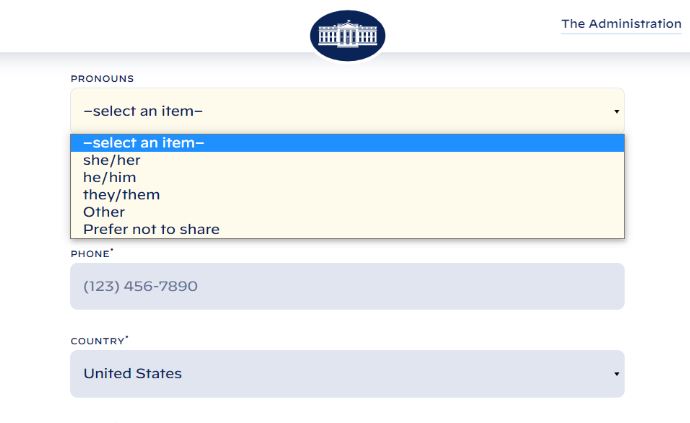 The Biden administration has signaled it will prioritize gender theory.

The White House has added a list of preferred pronouns that people contacting their website can choose, a move transgender campaigners are celebrating as a sign of policies to come.

The Biden administration has also appointed transgender doctor and activist Rachel Levine as his assistant secretary of health.

Levine is set to become the first transgender federal official to be confirmed by the US Senate.

What are your thoughts on the pick? pic.twitter.com/f8SLSVKBab

Following Biden’s inauguration, the White House website now includes prefixes and pronouns used by transgender people.  Anyone contacting the White House will be offered “they/them” among other pronoun options, along with an “other” option that leads to a self-declaration box.

The prefixes now include the gender-neutral “Mx.” alongside “Mr.” and “Ms.”.

“On Day One, the Biden administration has taken immediate steps to include trans, nonbinary, and gender nonconforming people in the conversation,” said Gay and Lesbian Alliance Against Discrimination President Sarah Kate Ellis.

“Pronouns matter, and adding inclusive pronouns to a contact form is more than just a demonstration of allyship. Research has shown that recognition and respect of our pronouns can make all the difference for our health and wellbeing—especially when it comes to LGBTQ youth,” Ellis claimed.

Conservatives like Mike Cernovich said the immediate change showed Democrats would not be afraid to implement controversial policies throughout Biden’s term in office.

“Conservatives will dunk on that but it shows from Day 1 they are ready to WORK. We might not like what thats going to be, but they came in Day 1 with their people and they are running the courts,” he said on Twitter.