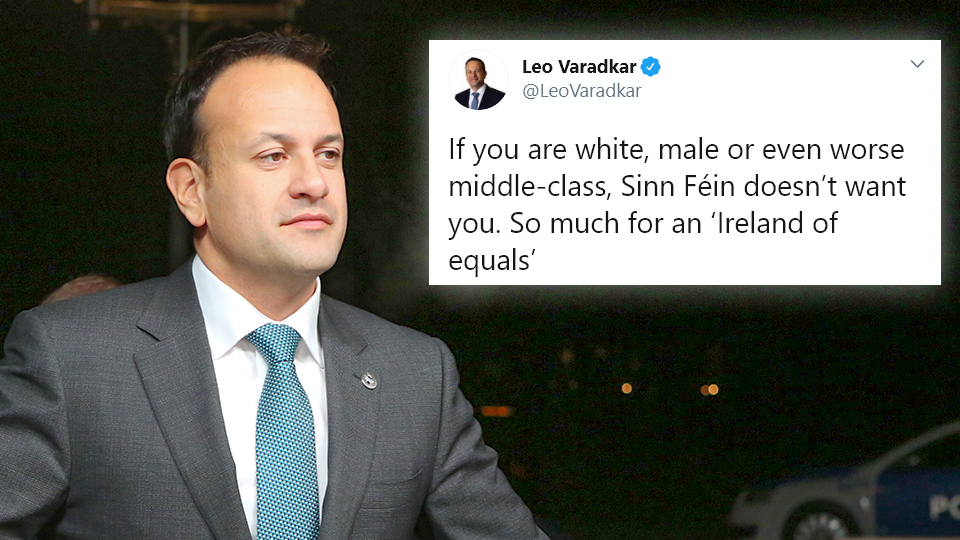 If you’ve been on Irish Twitter in the last week or so, you may have seen the viral clip of Sinn Féin’s Lynn Boylan pillorying Fine Gael senator Barry Ward for his gender and skin colour, like the true anti-racist, non-sexist, egalitarian socialist that she is.

While debating the wording of a government bill on rent and tenancy, Boylan insisted that Ward didn’t understand the issue at hand, mainly because of his genitals and the amount of melanin in his skin.

I'm disappointed by the attitude from Sinn Féin that a "white, middle class man", even one who has spend his professional life defending accused persons, couldn't possibly understand what it is like for some people to go before the Courts.https://t.co/NCYvXAHdgV pic.twitter.com/VPs4dZyM9u

Now, of course we should not forget the rich irony that a representative of Sinn Féin, the party of feminism, “anti-racism” and Black Lives Matter, is happy to attack someone for their race and sex, and dismiss their view out of hand because of how they were born.

Join the Online Protest against racism today at 3pm – play your part:

It does beg the question though, if that means most of Sinn Féin’s leadership also have invalid opinions? After all, party-leader Mary Lou McDonald and housing spokesperson Eoin Ó’Bróin (Boylan’s partner) are also white, privately-educated politicians from privileged upbringings. It seems somewhat like a case of the pot calling the kettle black.

But moreover, aside from the obvious ad hominem attack, what does Ward’s maleness have to do with anything? Does Boylan think that there are no male Romas or Travellers? Why would Ward being male give him any gender advantage over another man who happens to be from a different ethnicity? Her criticism doesn’t even make sense using social justice reasoning. And that’s even assuming that there is racial discrimination in Irish courts, which she’s provided no evidence of.

Regardless, following the exchange, Leo Varadkar (of all people) weighed in with an uncharacteristically un-PC take:

Just to clarify the point I was trying to make here – I was highlighting the fact that SF dismissed Barry’s views because of his background. No one should have their views dismissed because of their race, gender or social class. That’s all

Now, you might be inclined to double take at this, and wonder if you’ve accidentally stumbled into some kind of trans-dimensional warp where everything is backwards. Could Leo, the king of cringeworthy liberal identity-politics, finally have come around and started judging everyone as individuals, regardless of their arbitrary traits?

Well, don’t get your hopes up. This is the same Leo Varadkar, after all, who suggested that there should be migrant quotas for government positions. He stood up in the Dáil to complain about how racist Ireland is in the wake of George Floyd’s death in the US, and his government has just announced that Leaving Cert grades will be artificially “balanced” based on gender and economic status.

In fact, in his very next tweet after criticising Sinn Féin for judging people for their “background”, Leo celebrated Joe Biden’s VP pick, Kamala Harris, for being half-Indian – in other words, judging her based on her ethnic background.

Good luck Joe. Delighted you chose the brilliant @KamalaHarris as your running mate. A true trailblazer, half-Indian and committed to justice. And you’re both Finnegans! I know you’ll both be friends of Ireland https://t.co/aIPjy3Lae3

So clearly, if Varadkar had a moment of lucidity, it didn’t last long. It seems more likely that the former Taoiseach saw an opportunity to cynically attack Sinn Féin for something that he too is guilty of, and he took it.

But whether the messenger was sincere or not, that doesn’t make the message any less true. It goes without saying that if Barry Ward, or any other male politician, told Boylan that she didn’t know what she was talking about because she is a “middle-class white woman”, or dismissed Varadkar for being a “gay mixed-race Indian man”, that person would be crushed under an avalanche of negative press and figuratively hanged in the streets. They’d be branded a “sexist”, a “racist”, etc. by every media outlet in the country, and torn to shreds in the court of public opinion.

However, for radical Leftists like Boylan, the repercussions are non-existent.

The Left’s double-standard is clear, and anyone looking at this situation understands that white people, males, and the middle class seem the only remaining groups in society that anyone can disparage with impunity.

Getting the facts right about reversing effects of abortion pills