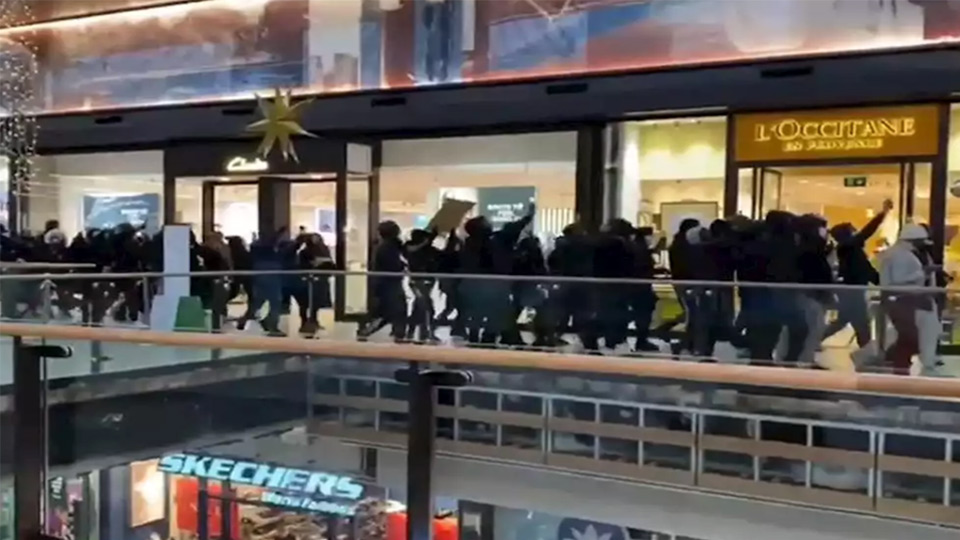 Residents of Blanchardstown and other parts of north county Dublin say they have endured 24 hours of violence and intimidation following the death of George Nkencho, an African man who was shot by Gardai after he attacked staff at a Eurospar armed with a knife.

According to eyewitnesses, Mr Nkencho punched a manager in the store, and threatened staff with a knife. Gardaí followed him out of the shop to his home, repeatedly asking him to drop his weapon. The Armed Support Unit fired fatal shots after Mr Nkencho lunged at them with the knife.

Political figures such as Paul Murphy TD, Senator Lynn Ruane, Ruth Coppinger and others seemed keen to make race an issue in the shooting, with Murphy asking “Did the fact that he was a black man affect the decisions the Gardaí made?” No evidence has been proffered to date to suggest that race had any bearing on the Gardaí actions

Protests were held at Blanchardstown Garda Station yesterday, which were reported as being largely peaceful, but locals say that violence and intimidation quickly followed as large groups of protestors attacked shoppers, buses, gardai in hours of mayhem across the area.

One woman told Gript.ie that people were “trapped in their homes” and “terrified” on New Year’s Eve as gangs of  protesters engaged in a lengthy stand off with the Gardaí around Hartstown.

“We were afraid to leave the house. We felt terrified. The people in the Spar had to be locked in earlier, and people were being threatened. There was a garda helicopter over the area for hours, and they were throwing rocks and fireworks at the Gardai,” she said.

She asserted that racism “wasn’t the issue here” and was strongly critical of what she described as a “media blackout” on the disturbances accompanying the protests. Some of the videos posted on social media have been described as disturbing.

The protest at the Blanchardstown Garda Station was tense at times.

It then moved to the Hartstown Spar where Mr Nkencho first attacked staff. A video shows “staff and customers trapped in Hartstown Spar.”
“Protesters can be heard shouting ‘I hope you die, I Hope you die you fucking white bastards’. How on earth is this going to help anyone or anything?” the woman asks.

Protesters can be heard shouting "I hope you die, I Hope you die you fucking white bastards"

How on earth is this going to help anyone or anything? #JusticeforGeorgeNkencho pic.twitter.com/r3RGzaAxZy

Customers are heard asking “where are the Guards” as they remained trapped in the shop behind the shutters. Three Gardaí cars had arrived at the scene and were attacked by some of the protestors but no arrests were made.

Some protesters surrounded a bus in this video, with one heard saying “this is red-hot” as another laughed “this is a mad spot now”. Others called for the road to be blocked.

A woman and her son were set upon in this disturbing video of an attack close to a Circle K petrol station.

This woman in the car park of Blanchardstown Shopping centre was followed to her car by a shouting crowd of protesters, with one man heard saying “just let me beat her”.

Heaven knows what would have happened to this woman were it not for the actions of a few of the more sane members of this mob.#JusticeforGeorgeNkencho #JusticeForGeorge #Blanchardstown #Garda #Gardai #ripgeorgenkencho pic.twitter.com/zzgEVi7zRF

In the shopping centre, people were also attacked and intimidated according to eyewitnesses.

So how are the gardai supposed to police this ? Todays situation in Blanchardstown shopping centre. Do these youths families even KNOW their kids are doing this? pic.twitter.com/JnPCv6jEdd

A Fianna Fáil Councillor said that “the scenes today coming from Blanchardstown are nothing but thuggish behaviour intimidating shop workers and members of the public.”

The scenes today coming from Blanchardstown are nothing but thuggish behaviour intimidating shop workers and members of the public. Full respect to @GardaTraffic @gardainfo as they try to manage the situation.Regarding the incident yesterday there is a full investigation by GSOC. https://t.co/Nsm5HBrvl1

Many people were critical of RTE’s coverage – or lack of coverage of what was happening in the area.

Anything on the #RTEbias about the people in Blanchardstown Shopping Centre being terrorised today? 🤔🤔🤔#JusticeforGeorgeNkencho pic.twitter.com/tYOkoRLFgI

RTE I wonder have you noticed that Blanchardstown is being torn apart today. Anyone of your crew willing to cover that no?

Lynn Ruane invited onto RTÉ countdown to spew her toxic far left politics 24 hours after she was race baiting and instigating protests in Blanchardstown in the middle of the pandemic. RTÉ get worse every year. Small minded individuals.

Emeka Ejezie, an Igbo community leader, told protestors at Blanchardstown Garda Station that “The right message is that what happened to George shouldn’t happen to anyone, regardless of race.”

Govt declares: We will cut the deficit later, promise.