Activists call for apology from Taoiseach after Russell statue attacked 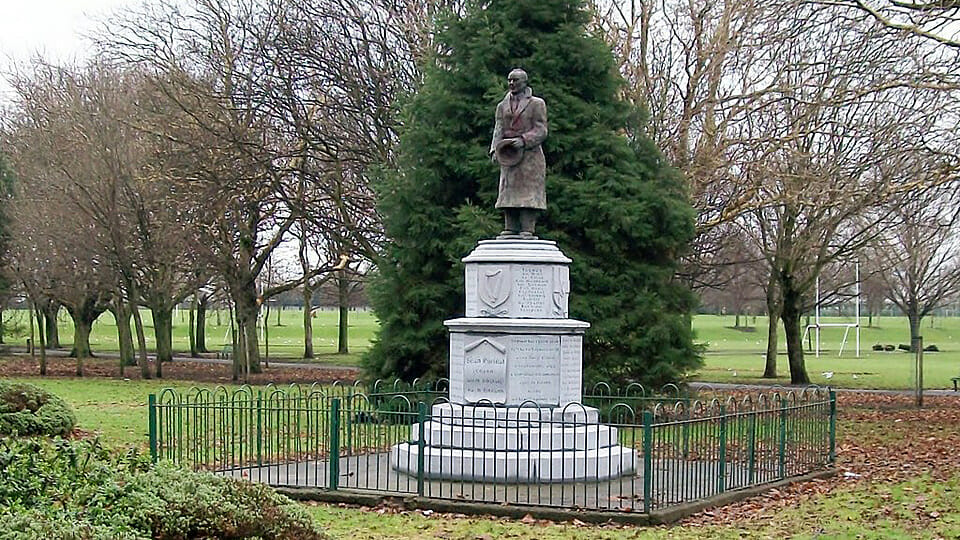 Local activists who help maintain and upkeep the statue of republican Séan Russell in Fairview Park have said they feel Leo Varadkar’s call to have the statue taken down may have prompted others to deface the monument.

On Monday, the statue was defaced by being painted with the rainbow flag colours, usually associated with the LGBT movement.

Referring to Russell’s statue, in the context of the toppling of statues in the UK and the US after the killing of George Floyd, Mr Varadkar told 2FM earlier this month that “We have a few of our own statues we may need to take down”.

Russell was an IRA volunteer who fought in the 1916 Easter Rising and held senior positions within the IRA during the War of Independence. Refusing to recognise the Treaty, he continued to fight for the rest of his life, serving as Chief of Staff for the IRA from 1938 until his death. His monument, erected in the area in which he was born, also remembers 33 IRA members who died in the 1930’s and 40’s whether killed in action, executed or dying on hunger strike.

Malachy Steenson, veteran Republican whose grandparents and parents fought alongside Russell and is  a local  solicitor, was strongly critical of the attack on the statue and told RTÉ’s Liveline said that he believed Mr Varadkar’s words may have contributed to the mood which led to the vandalisation of the monument.

“This is a statue erected by the National Graves Association (NGA) to a local hero and Leo Varadkar has no power to take it down,” he said. “We’d like an apology from the Fine Gael leader for targeting Séan Russell’s monument as a statue he’d like to see taken down, and for being careless with his words, which he knew would be widely reported, at a time when you have people in this country as well as in other jurisdictions who are set on tearing down statues pretty indiscriminately,” he said.

Responding to claims that Russell was a Nazi and that he had died on a German u boat in 1940, the NGA said that “recent comments circulating in the media regarding Seán Russell are unknowingly or deliberately incorrect.

“Seán Russell was no fascist, he was a traditional Irish Republican who also sought assistance for the campaign in Ireland in the Soviet Union and the United States. His thinking was that ‘England’s difficulty is Ireland’s opportunity” and he said himself that he “cared little for Nazi ideology”. Leo Varadkar might not agree with his republicanism but its wrong to call him a Nazi and he should know that when the Taoiseach calls for a statue to be taken down, there will be a reaction. Fine Gael, with their historical support for the Blueshirts may find they won’t want a spotlight on their past,” he said.

However, Mr Varadkar’s stated that ‘there is a statue in Fairview Park in Dublin of an Irish republican man who was also a Nazi collaborator,” and said he believes “any statues that come down should come down legally, let’s not engage in violence”.

Mr Steenson also noted that a board member of an organisation funded by Dublin City Council seemed to celebrate that the statue was defaced.

“A board member of GAZE, a festival which is sponsored by Dublin City Council, tweeted that she was “loving” that the statue was painted over, yet workers from Dublin City Council had to come out and clean the statue later that day. It seems to me that some serious questions need to be asked here,” said Mr Steenson.

Fine Gael councillor Ray McAdam from Cavan has submitted a request to Dublin City Council for the removal of Russell’s statue.