Why I left the Left: Camus – the conscience of the French Left 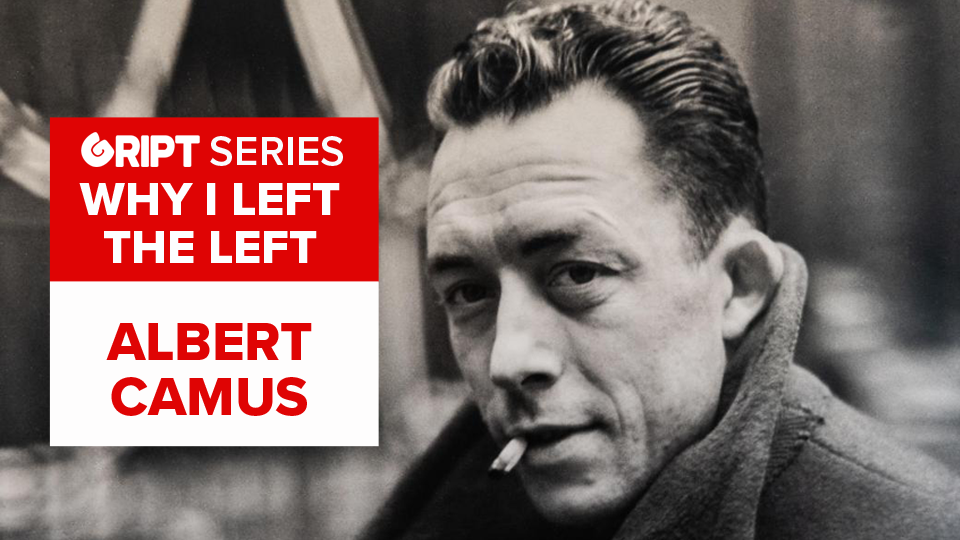 Albert Camus, who won the Nobel Prize for literature in 1957, was an early left critic of Marxist totalitarianism. He had been a member of the Communist Party of France and the Communist Party of Algeria in the1930s but rejected both the philosophy and reality of what Communism meant when it became the state ideology in the Soviet Union.

He edited the Resistance newspaper Combat during the German occupation, and opposed the Communist Party’s bid for power after Liberation. The Communists attempted to portray themselves as the leaders of the Resistance even though they only began to oppose the Nazis after the German invasion of the Soviet union in June 1941. Some Communists did ignore their leaders’ adherence to the Stalin/Hitler Pact before that.

Although Camus still considered himself to be of the Left, he and Combat effectively supported de Gaulle in his facing down of the Stalinists in 1947. His 1951 book The Rebel, an incisive dissection of the totalitarian Left, led to his final break with Sartre who remained an apologist for Stalinism and its imitators until his death in 1980.

Camus, like our own Samuel Beckett, displayed genuine courage in opposing the Nazis. Sartre had his dreadful book Being and Nothingness approved by the Nazi censors and his play The Flies was performed in what was known as an “Aryanised theatre.”

Sartre was typical of an intelligentsia that often allowed its worldly affectations of cynicism to override any moral sense. While some denied the existence of the Gulags, Sartre’s attitude was not to deny them, but to pose the question: “Why should they embarrass us.” Although Camus did not name Sartre, he was undoubtedly thinking of him when he described another fellow traveller as a “servant of the concentration camp universe.”

Camus exposed the core of totalitarianism as the use of terror to force “refractory citizens” to be good, and to punish them when they failed to live up to an impossible ideal. The more that the prophecies of Marx were proven to be wrong, the more brutal became his disciples as they clung to the “mystic idea which claims to be scientific,” that “one day, far away in the future, the end will justify all.” Which makes no more sense than contacting a clairvoyant to ask him or her who is going to win the last race at Pontefract.

Camus’s prescience among the European Left in identifying those innate flaws of “scientific socialism” earned him the undying enmity of the Communists and their sneaking regarders. It may even have led to his death. The Czech poet Jan Zabrana recorded in his diary what he believed was a reliable claim that the KGB had interfered with the car in which Camus was killed in a crash in 1960.

Perhaps of more topical relevance is that Camus also dealt with the origins and implications of nihilism. That pertains to the aims and composition of the Black Lives Matter and Antifa rioters in the United States, and to their admirers among the far left here and in other countries. BLM is remarkable for such a powerful movement in that it confines itself to simplistic racially based slogans. The BLM website does not sell books; only tee shirts and other accessories. MTV meets the Black Panthers.

In common with Extinction Rebellion, which is also remarkable for the almost total absence of any strategy to bring about its aims, Antifa have more in common with the myth based Nazis than the traditional far left. They are of course happy to hitch their star to those wagons as they realise their almost complete lack of appeal to the “square” working class.

The roots of contemporary nihilism lie not in the bankrupt ideas and catastrophic failures of Marxism but in the Russian and European anarchist terrorists of the 19th century. Camus identified Sergei Nechayev as the chief ideologue of political nihilism. In his 1869 Catechism of a Revolutionary, Nechayev described the revolution as the enemy of all order, morality and tradition, dedicated to the “science of destruction.”

While it is doubtful that many of the rioters and looters in America are familiar with Nechayev or anything that doesn’t appear on rap tracks and video games, they are the criminal types who constituted the nihilists ideal of the creatures who would destroy the social order. We know that from their icons and the types of people arrested for violent activities.

Like the Nazi Brownshirts, they believe that it is “better to be criminal than bourgeois,” and they abide by what Camus described as the “ethics of the gang.” Some of their spokespersons celebrate looting and mugging as “reparations.”

Behind the Nechayevs are those like Dostoyevsky’s Chigalev: ostensibly believing in absolute equality, but resigned to it only being possible under conditions of “unlimited despotism.” Camus’ great service was to demonstrate how one led to the other