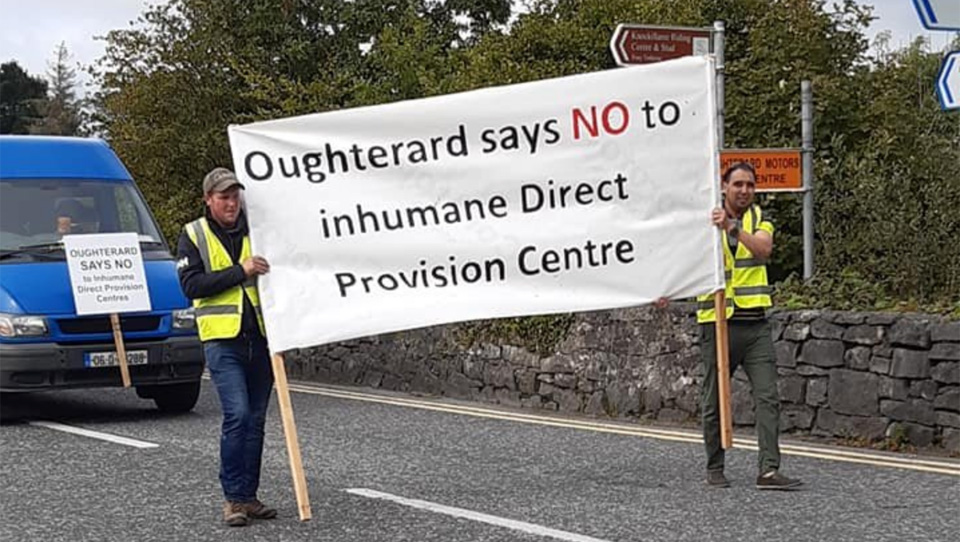 It seems that the people of Oughterard in Galway are not for turning. Despite orders from Justice Minister Charlie Flanagan that they should ‘step back’ and let the government ride rough-shed over the concerns of the community, they continue to protest against the establishment of a direct provision centre they see as unworkable and inhumane.

This issue was first brought to national attention when 800 people attended a public meeting in Oughterard where Government minister Seán Kyne was booed off the platform, mostly because of local anger that, without any consultation with the locals, the authorities had begun work on refurbishing the Connemara Gateway Hotel to accommodate migrants and asylum seekers.

Two days later 1,500 people marched in a silent protest from the church in the centre of the village to the site at the hotel. That’s practically the entire population of Oughterard, and photos of the march showed families with buggies, young people, older couples, farmers, residents all present. These are ordinary people who want their government to listen to them.

They are now mounting a round the clock protest at the site, with placards stating ‘Oughterard says No to Inhumane Direct Provision Centres’.

Locals say they are concerned that the village cannot sustain 250 new inhabitants, and they worry about what that will mean for housing, healthcare, schools and other services. At the public meeting, speakers accused the Government of neglecting rural towns and pointed to the reality for towns like Oughterard which has schools full to capacity, just one doctor, no Garda station, and people on waiting lists for social housing with no new homes being built.

They also pointed out that direct provision is an utterly failed system, describing it as “putting people into a compound”. Its hard to disagree with that assessment.

People in Oughterard are angry, and have every right to be, at the absolute lack of consultation with the people who live in the area where a direct provision centre is to be imposed. As has previously happened in other rural areas, the authorities – including the Department of Justice and Equality – simply refused to communicate or provide any information.

The usual suspects rushed to condemn opposition to the direct provision centre in Oughterard as racism, lighting up Twitter with hysterical accusations, and issuing shrill calls for the village to capitulate and show their opposition to “hatred” by backing down immediately, despite the genuine and valid concerns locals have.

Left-wing activists, who seem to have unfettered access to the media in Ireland, accused those attending the meeting of acting out of “fear and ignorance”. But its not fearful or ignorant to ask questions nor to seek answers. It’s the right of every Irish citizen to be consulted when significant and far-reaching changes are being imposed on their communities.

Everyone actually knows this controversy is not about racism. Racism – which is a plague that needs to be vigorously opposed – has now become a term that is used to shut down discussion or debate, and to shout down people who have a right to be heard. That does everyone a disservice.

The deepest divisions in Irish society are caused, not by race or gender or identity or any of the media’s other favourite hobby-horses, but by inequality of opportunity and income and wealth, and as these inequalities grow, so does the high-handedness of the political elite.

Wealthier people tend to be mostly in favour of unrestricted immigration, but while they like to frame this as arguing from compassion the truth is that newcomers are often a source of cheaper labour for the better-off: in their homes, their factories, and elsewhere. The less well-off sometimes feel that new arrivals may compete with them for services, especially in regard to housing and medical services (they can’t afford private insurance), and worry that the influx of additional labour might also drive down wages. 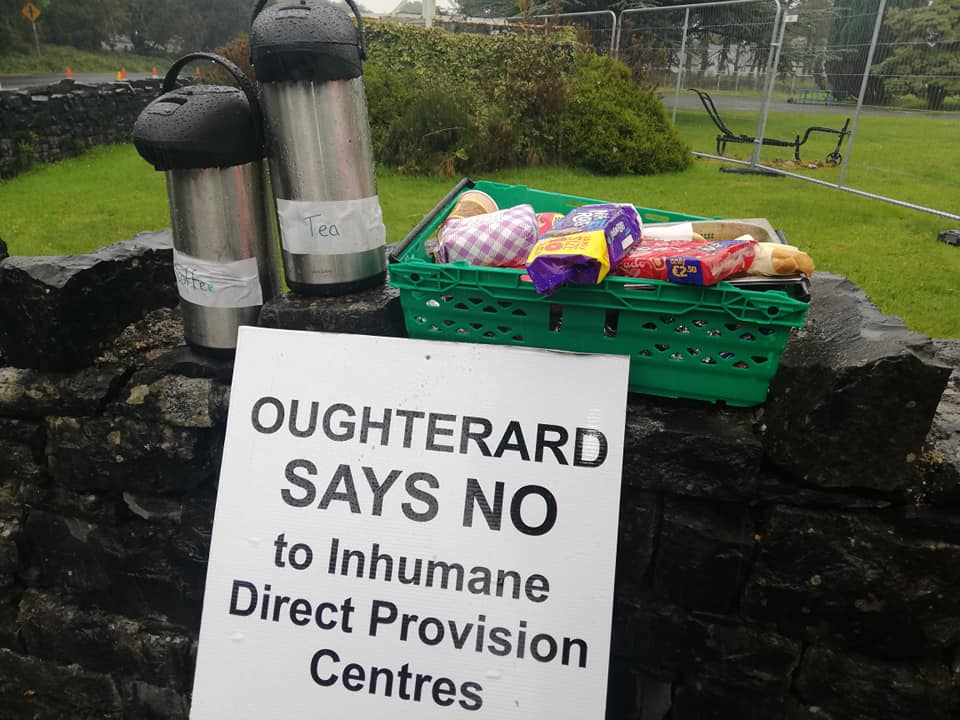 Again, these are genuine fears, and shouting ‘racism’ won’t make them disappear. In fact, it only serves to inflame the situation.

Most people welcome the successful integration of migrants to Ireland in the past decade or so, and many of us have neighbours from Poland or the Congo or elsewhere that have made happy, successful lives for themselves here.

In the same way, Irish people want to be welcoming, especially to those who are genuine refugees, but they also worry about the capacity of the country to sustain further numbers when 10,000 people are homeless and a staggering million people are on waiting lists for hospital treatment in our shambolic and chaotic health service.

“It’s nothing about race, it’s about numbers,” a local woman in Oughterard told the Irish Times last week. Another local, Sammy Nawi, from Morocco who has been running the local pizzeria since 2012, told the paper he loved the people of the town “like family”. He also believes Oughterard is “too small” to facilitate the large numbers of migrants and asylum seekers believed to be designated for the hotel.

No doubt the lefties spitting bile on Twitter would describe him as racist too.

Ordinary people are sick of getting shouted down or patronised when they raise valid concerns. They are not consulted – instead they are told what to do and think and say, expected just to put up and shut up.

Take for example, the condescending lecture given by Galway TD, Catherine Connolly, to the people who packed out the public meeting in Oughterard. She seemed annoyed with them for turning up in such large numbers, saying “I really wish that you show the same spirit after tonight in relation to health and housing and public transport”. It’s up to Deputy Connolly, it seems, to decide what concerns people are allowed to have. Of course, locals were there precisely because they are worried about health, housing and public transport, but that was lost on the Galway TD.

Then there was Charlie Flanagan, the Minister for Justice and Equality ordering people to “step back” and let him deal with this, as if he was a teacher putting manners on bold children.

The local people have no reason to trust Flanagan, because the lack of transparency from his department has been breathtaking. The Department of Justice seems to think it can act in secrecy and that it has no obligation to inform or consult with local communities. In Oughterard, they refused to confirm the reason for the hotel’s refurbishment, saying that options for the direct provision centre were being looked at and people would only be consulted after a decision was made. In other words, we’ll do what we like and only talk to the plebs when the whole thing is a fait accompli.

This arrogance, perhaps more than anything else, is fuelling opposition to the imposition of direct provision centres. People recognise contempt when they see it, and people increasingly feel this government is treating its own people with contempt, as if their role is simply to pay taxes and do what they are told.

It’s also obvious that the elites making decisions about direct provision centres are not expecting the same commitment from the wealthy communities they live in.

The 2018 report from the Reception and Integration Agency shows that their accommodation portfolio was comprised of a total of 39 centres throughout 17 counties, with a contracted capacity of 6007.

Out of those 39, just two centres are in Dublin – one in the city centre and one in Clondalkin.

There are no direct provision centres in Dalkey or Blackrock or Rathgar. In fact, there are none –  and there never have been any – in the leafy suburbs of Dublin where so many of the influential and powerful live, including many of the journalists trying to shut down the right of local communities to have a point of view on this issue.

In response, no doubt, they will argue that its simply not cost effective to host asylum seekers on the Rock Road.

But that’s not the full picture.

When a reception centre for asylum seekers was proposed in affluent Ballsbridge, the residents didn’t bother holding a public meeting, they went to law, seeking a judical review and stymieing the process with the kind of clout only money can buy. They succeeded.

So it seems, as ever, there is one law for the rich and another for the rest of us. 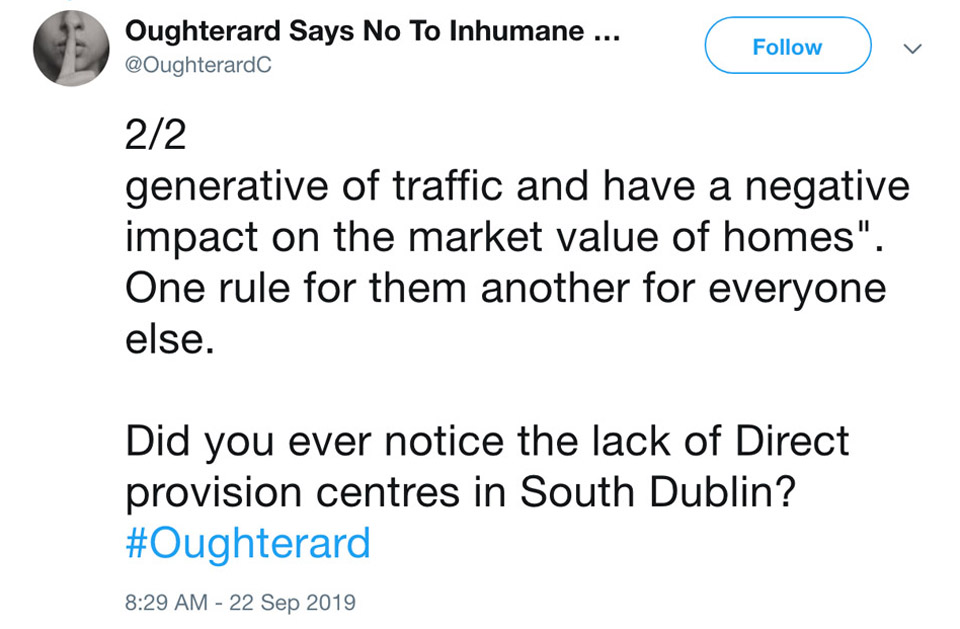 If the elites are worried about a strain on local services or their schools being over-crowded, they go to court or work their political connections to stop that happening. Then they wag their fingers at the people of Oughterard.

This dishonesty is also reflected in how this issue is reported in the media. Local people are accused of turning away refugees when the journalists and activists making that charge are all too well aware  that most of the people being housed are economic migrants, not refugees fleeing persecution.

Ignoring this distinction is key to whipping up anger on social media, but this time that form of intimidation doesn’t seem to be working.

As the protesters tweeted :”The government refused to hear our voices so we silently marched. We marched in silence to signify that the people of Oughterard have not been listened to and have had their right to have their say on the matter taken from them.”

Local communities are asking to be consulted and respected. A government that ignores its own people cannot then be taken seriously when it says it is motivated only by concern for asylum seekers.