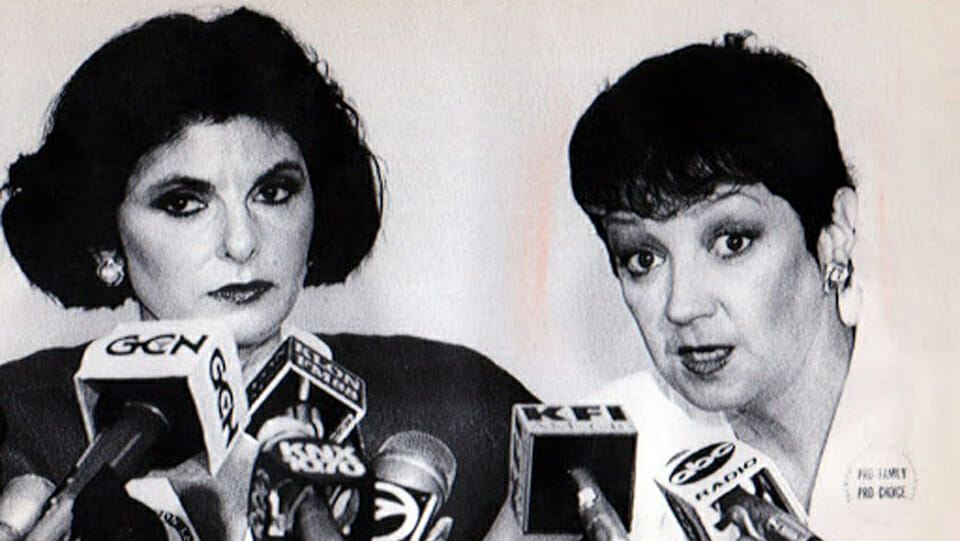 A new documentary’s portrayal of Jane Roe from the famous abortion case rings hollow to her longtime friends.

Pro-life activist Norma McCorvey, who was “Jane Roe” in the 1973 Supreme Court case of Roe vs. Wade that struck down many state laws that restricted abortion, has led an eventful and fascinating life on both sides of the issue.

Reprinted with permission from TheAmericanConservative.com

On May 19, the LA Times published a bombshell: An upcoming FX documentary would reveal that the Religious Right had paid Norma McCorvey—Jane Roe of Roe v. Wade—to switch sides. “I was the big fish,” AKA Jane Roe features McCorvey saying. “I think it was a mutual thing…I took their money and they’d put me out in front of the cameras and tell me what to say.” The New York Times summed up the narrative of the media feeding frenzy that followed: “Norma McCorvey’s Pro-Life Conversion was a Con.” To confirm this, McCorvey is even quoted as saying that if “a young woman wants to have an abortion, that’s no skin off my ass. That’s why they call it choice.”

AKA Jane Roe was released on May 22, and it turns out that the bombshell is a firecracker. Producer Nick Sweeney, whose previous projects include Born in the Wrong Body, Transgender Kids Camp, and The Sex Robots Are Coming, has a handful of out-of-context quotes from McCorvey, most of which are prompted with obviously leading questions, but his primary accomplishment appears to be selling the entire mainstream media on the idea that the last decades of Norma McCorvey’s life were “an act” and that her relationship with the pro-life movement was defined by money. This is not, in fact, what the documentary reveals, and over the past several days, her friends—those who knew her best—have pushed back against Sweeney’s portrayal.

The details of Norma McCorvey’s life are both tragic and well-known, and AKA Jane Roe adds almost nothing new. Her mother was a violent alcoholic. Her father abandoned the family when she was only 13 years old, and by then home life was so unbearable that at age 10 McCorvey had already stolen money from a gas station to run away from home with a female friend. She was caught, sent off to reform school, and remained there for five years. She was then farmed out to a relative, who sexually abused her. She got married at age 16 to steelworker Woody McCorvey but left him to return to her maternal home to raise their child when he proved abusive, too. She soon lost custody of her daughter, Melissa, to her mother.

By the time she met Linda Coffee and Sarah Weddington age of 22, McCorvey had been pregnant three times out of wedlock, dealt drugs, and was desperate for an abortion. She was living with her long-time lesbian partner, Connie Gonzalez. She was not, as she noted wryly in her 1994 memoir I am Roe, the sort of person that hotshot feminist lawyers generally associated with: “It was obvious to me even from across the room that these women hadn’t talked to a person like me for a long time, if ever.” But she was the perfect candidate to challenge Texas abortion law: poor, wanted an abortion, and even claimed that the pregnancy was a result of rape. McCorvey wasn’t told how long the case would take, and by the time the Supreme Court issued their Roe v. Wade ruling on January 22, 1973, her baby had been born and placed up for adoption.

Much to the dismay of many pro-choice leaders, who felt that she was an unreliable and volatile spokesperson, McCorvey wanted recognition as Jane Roe and was upset when that was denied her. “If you’re nice and quiet, no one pays attention to you. And I like attention,” she says at the beginning of the film. She gave media interviews, including an infamous one where she admitted that the pregnancy that triggered Roe hadn’t been as a result of rape like she’d claimed. For many pro-choice leaders, this was evidence that their concerns about McCorvey’s unreliability were valid. Until women’s rights attorney Gloria Allred took McCorvey under her wing, McCorvey was largely sidelined. Eventually, both McCorvey and her partner Gonzalez ended up working at a Dallas abortion clinic.

Her 1994 memoir might have been her final word on everything, but at a book signing for I Am Roe, McCorvey met Flip Benham, a pastor and pro-life activist who was then serving as national director of the pro-life group Operation Rescue. As she described in her second memoir Won By Love, published in 1997, her relationship with Benham and other pro-lifers while she worked at the clinic led to her to Christianity and the pro-life movement. On August 8, 1995, she was baptized by Benham in a backyard swimming pool in Dallas, Texas. It was filmed for national television and made headlines across the nation. Jane Roe had switched sides.

According to AKA Jane Roe, this conversion was all an act, and the pro-life movement paid her to change her mind. But despite the headlines, nowhere does McCorvey say she was paid to change her mind—only that she was paid to speak. It is common practice to pay honorariums for speaking engagements, and it is ludicrous to assert that paying someone to speak for a cause is the same thing as paying them to believe in a cause. Sweeney’s evidence that McCorvey was paid off is almost farcical: He shows a 990 form for McCorvey’s pro-life group Roe No More Ministries. Over the decades, Sweeney reveals, McCorvey and her ministry received up to $456,911 in gifts, a relatively small amount. In fact, McCorvey’s friend of 22 years Karen Garnett told me that the Catholic Pro-Life Committee of North Texas, where she served as executive director, donated monthly to Roe No More purely to assist their friend. The idea that donations to a pro-life ministry constitute bribes is simply laughable.

The reality is that McCorvey’s pro-life friends were always there for her. She lived with Troy Newman of Operation Rescue in Wichita, Kansas, for several months when she needed a place to stay. When her health began to fail and she was in and of the hospital, Garnett told me, she lived with a pro-life woman in Dallas who “took her in.” None of this, both Newman and Garnett told me, was done for money. The pro-life movement had a responsibility to take care of her, and they did so not because she was a trophy, but because she was their friend. It is true, several of her friends told me, that many people looked at Norma McCorvey the woman and saw Jane Roe the symbol. But that is not how her friends saw her. They knew and loved her in all her pain, complexity, and volatility.

Father Frank Pavone, McCorvey’s spiritual director and close friend (she asked him to conduct her funeral and spoke to him by phone the day she died), noted that every assertion made by AKA Jane Roe is not supported by the evidence. She does not actually claim that she supports Roe v. Wade during the film. She does not say that her conversion was faked, and her friends have shared countless stories detailing how she lived out her pro-life convictions, regardless if her views became complicated in her last years. She does not say she was given large sums of money in order to remain pro-life. Even her statement that a woman choosing an abortion is “no skin off my ass” is presented without context—we do not know the question that prompted the answer, or what she said afterwards. In fact, it was Sweeney who specifically asked her if some of her advocacy had been “an act”—his words. In the few clips of their conversations that he includes, he is obviously attempting to guide the conversation.

Karen Garnett, who was so close to McCorvey that they had pet nicknames for one another and referred to their friendship as a “sisterhood,” gave a blunt analysis after viewing the documentary: “This just doesn’t ring true. That wasn’t the Norma I knew for 22 years.”

None of these friends, of course, were interviewed for AKA Jane Roe. Sweeney did speak with Flip Benham, who described the events surrounding McCorvey’s pro-life conversion, but his main source on the pro-life movement is Rev. Rob Schenk. Schenk is a former pro-life activist turned pro-choice advocate who has become a vocal supporter of Roe v. Wade and now spends much of his time apologizing for his previous pro-life activism to the media. None of the friends who were with McCorvey in the days and weeks before she died were interviewed. That was no accident, several of them told me. Sweeney was clearly searching for an interviewee who would confirm his prejudices about the pro-life movement, and Schenk’s willingness to condemn his former friends and colleagues made him perfect to support Sweeney’s narrative. Schenk told Sweeney that, “I know damn well we were playing her.” According to McCorvey’s friends who spoke with me, Schenk speaks only for himself.

Norma McCorvey died on February 18, 2017, surrounded by those she loved. In her final hours, she spoke with many of her friends from the pro-life community that had rallied around her. “I received a phone call at 9:58 on Saturday morning, February 17 that Norma was dying and they didn’t know how much more time she had,” Garnett remembered. “I asked if I could tell her one more time that I and everyone loved her, and the phone was put to her ear so I could. With very labored breathing, she barely whispered: ‘Love you too, honey.’” And Norma died, knowing they loved her not because she had been Jane Roe, but because she was herself. And that, perhaps, is all she ever wanted.

‘Transphobic f**k’: Ferocious attack on JK Rowling is being led by the media

The truth about trans must be defended