Where next for Irelands “patriot” movement?

In the aftermath of an election, it’s natural that all the attention is focused on those who got elected and their haphazard attempts to form a government, or more accurately, to avoid forming a government. It’s less newsworthy to talk about the political futures of those who did not get elected at all, but that doesn’t mean it’s not interesting.

Over the past few years, a dedicated community of right-wing nationalists has emerged in Ireland, split amongst three political parties – Anti-Corruption Ireland, the Irish Freedom Party, and the National Party. They’re all, to various extents, anti-immigration, anti-abortion, strongly nationalist, eurosceptic, and by and large they loathe people like yours truly, who, they say, have done a terrible job advancing conservative causes in Ireland over the past two decades. In fairness, it’s also important to note that they’re different parties for a reason, and that one of them, the Irish Freedom Party, is what one might term “civic nationalist” as opposed to the ethno-nationalism of the other two.

At the election, despite boundless energy online and what appeared to be reasonably professional campaigns, the three parties got less than 15,000 votes between them. In a broadly disappointing election for the Irish Times’ view of the world, this failure was something for the newspaper to celebrate. “Far right parties put in dismal showing”, it blared a day or two after the election, in what was also the first thing it had written about any of those parties during the campaign itself.

But this is misleading, in one respect: The exit poll asked voters what their most important issue was – it did not ask whether an issue mattered to them at all. In a pre-election poll by Ireland Thinks, when asked to list their top four issues, fully ten per cent of the electorate mentioned immigration: 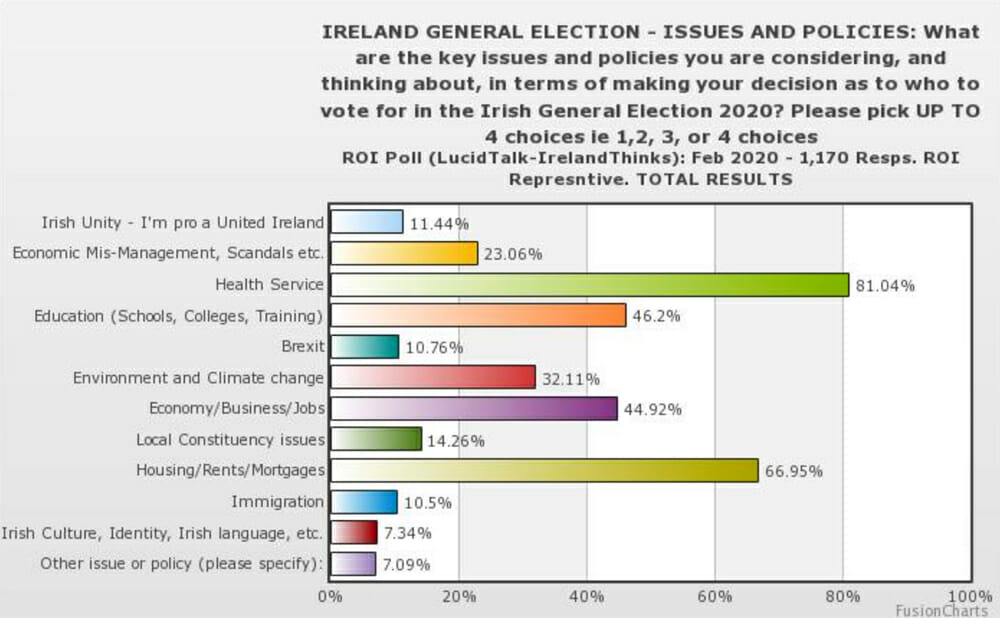 Indeed, as noted here last week, mainstream independent candidates who prominently talked about immigration did very well – Noel Grealish and Verona Murphy and Michael Collins all cruised to re-election, the latter taking a whopping 26% of the votes. If immigration was not the top issue for voters, opposing candidates with a sceptical view on immigration was clearly not the top issue either. If strongly anti-immigration parties did badly, it’s worth noting that no party chose to focus their campaign on an overtly strong pro-immigration platform either.

Immigration might be the issue with which the “patriot movement” is most identified, but it seems a stretch to argue that it was the issue most responsible for its electoral failure. The Irish Freedom Party, for example (full disclosure, Gript’s Ben Scallan stood as its candidate in Dublin Bay South) has a strongly Eurosceptic position, having evolved from the so-called “irexit” movement that argues for Ireland to follow the UK out of the EU. Whether one agrees with that position or not, it’s objectively at odds with the views of a consistent majority of the electorate.

Elements of the movement also seem keen to embrace positions that are conspiratorial, fringe, and almost laboratory designed to limit its popularity. Delve into “patriot” accounts on social media, for example, and you will find significant concern about 5G technology, and conspiracy theories about how immigration is part of an orchestrated plan to “replace” Irish people with foreign nationals.

All political movements, of course, have their nuttier fringes. Witness the story of the Sinn Fein TD, newly elected, who apparently thinks that Israeli intelligence rigged the result of the recent UK election. The Green Party leader wants to introduce wolves to the Golden Vale. Ask a Social Democrat to define the word “woman” and sit back in amusement watching them try to come up with an answer.

In successful movements, though, the nutters do not dominate.

Ireland’s so-called “far right” does actually have a story to tell that objectively isn’t “far right” – it just very often appears as if they have no interest in telling it.

The vote for Sinn Fein, for example, was objectively a vote for better public services, more housing, and – this last one is arguable but seems intuitive – a more muscular form of national self-identity. And yet on many questions, Sinn Fein is likely to pursue a cultural radicalism as extreme, or even more extreme, than the Government it sought to replace.

Indeed, on social and cultural issues, the political establishment aligns perfectly with the views of progressives – and a great many Irish people are not progressives.

The only “new” party to win a seat at this election was Aontu, which hues largely to mainstream political views on most issues while expressing a more conservative line on cultural matters. That party won three times the vote of the “patriot” parties combined. Why is that? Is it because of their left leaning line on economic matters? Or is it something more fundamental, and basic? It seems fairly obvious, from a distance, that it’s the latter.

Politics, ultimately, is about aligning your policy priorities with those of the electorate, something the “Patriot” movement has completely failed to do. But that doesn’t mean that they will be unable to do so in the future – just that they did not do so in this election.

There’s also the problem of temperament and tone, which is an Achilles heel that the movement doesn’t even seem to realise that it has. With some exceptions, this is a movement that seems utterly incapable, for the present moment, of speaking reasonably and in the tone that appeals to a regular voter.

Put simply, while many voters might be dissatisfied with the state of the country, they do not believe, and are never likely to believe, that the United Nations is planning to make them extinct in favour of their Nigerian-born neighbours. Nor do they believe that leaving the European Union is necessary to save the country, or that putting fluoride in water is an establishment plot to do…. something bad. Voters like to elect people who seem reasonably normal, and up to this point Ireland’s right-wing nationalists have found it impossible to project any commonality in values with most voters.

It would be a catastrophic mistake, though, for either the “patriot movement” to believe that it was impossible for them to succeed in the future, or for the Irish Times and the rest to assume that their success is impossible. Many of the things they believe have an audience with a far wider group of voters, and those voters are not being served by the political class.

Elsewhere in the world, when a populist right wing surge has come, it has come suddenly and with little warning. Spain’s Vox party, a similar movement of the populist right, went from 0.2% of the vote in 2016 to 15% of the vote just three years later, for example. Donald Trump came from nowhere to claim the Republican nomination in 2016. In France, the National Front can reliably lay claim to a fifth of the electorate.

For that kind of surge to happen here though, two things have to happen: The Irish establishment has to continue to fail, and the “patriots” have to learn how to seem reasonably normal. One of those things seems likely. The other, at present, seems a fair distance away.

“That’s not how we do things” – no mandatory vaccination in UK, says Boris