What does the actual data tell us about who is seeking asylum in Ireland? 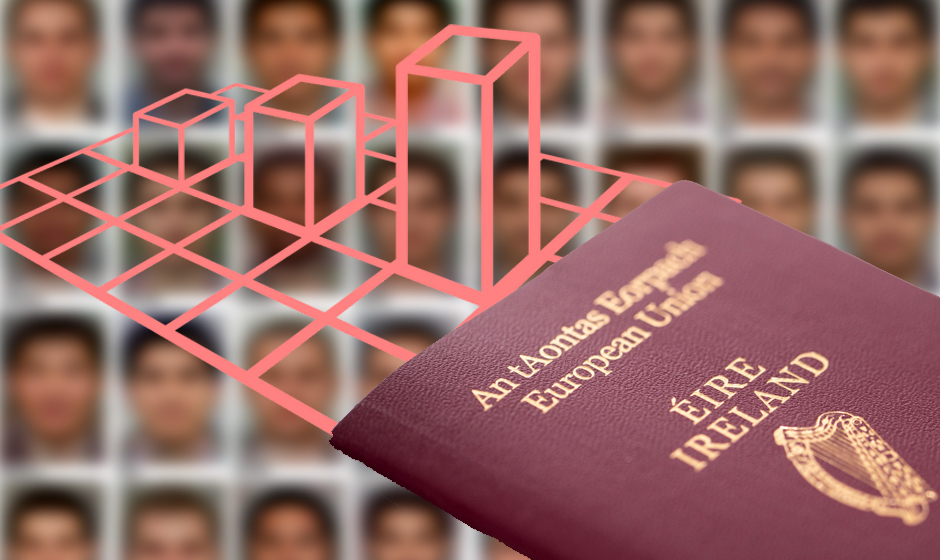 With the Citizenship referendum of 2004 again in the news, as the political “elite” plan ways to overturn that democratic decision, the current statistics available are worth looking at in the context of where the asylum process currently stands.

A request under the Freedom of Information Act elicited the following data from the International Protection Office. A request for the numbers applying who had arrived in the state since January was unable to be filled. It is probably safe, however, to assume that the number of applicants and arrivals are pretty close.

That, of course, does not include the unknown number who both come here illegally and remain here illegally, which may amount to a considerably higher number given the numbers being talked about with regard to an amnesty for the so-called “undocumented.”

When we also take into account the estimates from some experts regarding the number of people in slavery in Ireland as trafficked prostitutes, in cannabis grow houses and so on, we honestly may not have anything like a true picture of the numbers of people coming here. Even the official figures between the Census and PPS numbers seem contradictory.

Not surprisingly the numbers arriving here to apply for asylum has dropped in the Year of the Great Pandemic. There were 4,198 applications in the year up to the end of October 2019, which fell to 1,342 in the same period this year. The small discrepancy between that figure and the total in the table is accounted for by re-applications, relocations and domestic applications. The number of applications had risen from 3,608 in 2018 so this year is obviously exceptional in a steady growth over the past decade.

The 2020 statistics to date represent a decline of 68% which is actually smaller than the 76% fall in the overall numbers of people who travelled to Ireland. But even given the travel restrictions, much of the reason for the smaller numbers was the sharp drop in people applying from Albania and Georgia which was 1,579 in 2019 and just 65 in 2020. It would seem that it is easier for some unexplained reason to journey from Africa or South America or Asia than across Europe.

Over 52% of those applying were from Africa with safe countries like Nigeria, South Africa and Zimbabwe among the top four countries of origin. They have now been joined by a significant number of Somalians who have applied in small numbers here to date, and whose propensity for forming violent gangs has made them unpopular both with other Africans and host populations in countries that have taken them in.

That so many people managed to arrive here when strict travel restrictions were in place is a tribute to their own or the smuggling gangs ingenuity. That so many of the applications here are from places that no self-respecting leftie advocate for open borders would consider to be bad places because they are not run by white supremacists – in fact none of them are unless you include the seven applicants from the United States most likely fleeing Trumpism – is ironic. Find me a Shinner who would say a bad word about South Africa and I’ll bring you see an albatross nest.

It is also interesting to note that while the war in Syria has been cited as a reason for increased numbers seeking asylum here over the past number of years, the fact is that hardly any Syrians have applied for international protection here. Just 40 so far in 2020. That’s 3% of the total. Indeed when those objecting to the landing of Direct Provision centres in small rural communities were told to shut up and not be beastly to the Syrians, it was discovered that there was as much as chance of some of them being from Dagenham, London as Damascus, Syria.

It is also noteworthy, perhaps, that the origin of asylum seekers in Britain is very different to that here. For example, there is a far higher proportion of applicants in the UK from countries such as Iran, Iraq, Eritrea, Syria and Libya compared to very few in this state. The UK also has fewer applications per population, and a more rigorous decision process. In the year ending March 2019, 44% of asylum applicants in the UK were deported on decision.

Contrawise, while a large proportion of applications here have come from Nigeria, and latterly from South Africa; citizens of countries that have no wars or other criteria to justify the granting of international protection, very few Nigerians or South Africans make applications in Britain. Indeed of just over 22,000 applications made in Britain in the first three quarters if 2020, just 3% were from those countries compared to 18% here in 2020 and 14% in 2019.

Statistics on world wide refugee movements show that not only is Ireland among the top 50 states in the world when it comes to hosting asylum seekers, but that we are 9th in the list of all EU states, and the 23rd globally in terms of refugee applicant numbers per capita. Well ahead of the United States, Britain and Denmark.

And yet our deracinated elite which dominates almost every political party, media outlet, business organisation, trade union and NGO are never done lecturing us about how we are betraying the “Wretched of the Earth.” You know, the ones you see moving into council houses because local authorities like Fingal, which is ruled by an unholy alliance of the leftie woke, would seem to have a preferential policy towards refugees, most of them here when they ought not to be.

So not only are people from faraway places still managing to arrive here in significant numbers and managing through some miracle of international travel to by pass any other state where they might apply for safety from whatever it is they are fleeing, but the proportion of asylum seekers from countries which are safe in terms of generally accepted international criteria is increasing, while those from genuinely dangerous states falls.

The lesson of course is, as signalled by the cross party consensus on overturning our citizenship laws, and providing an amnesty to at least 17,000 illegal immigrants, is that if you can get here you are highly unlikely to be asked to leave. Even if you show no evidence that you are going to make a positive contribution to Irish society, or if you are of criminal background or inclination.

Minister McEntee has already followed up on her commitment to collaborate with the Bacik Citizenship Bill by boasting on Twitter about there having been no deportations since March. As was pointed out here recently, just imagine a Minister for Justice boasting about not penalising any other category of criminal, which illegal immigrants technically are. Get here, and you stay.

And lest you think that is an exaggeration, well if you are a betting person the odds against deportation as an illegal immigrant were 13/1 – a probability of 7% –  in 2019 when just 293 people were deported but of course many have been here for years. The numbers of those who arrived here in 2019 and were deported is probably somewhere closer to 0.

Now it is a bet to nothing it seems. By previous years reckoning the 17,000 figure for illegals here would appear to be an under-estimate, but of course like all else to do with this business we will only find out when the waters have been properly tested and the NGOs produce all the other dodgy cases, on top of the thousands more who are on their way.

For anyone who doubts that the floodgates will reopen if the 2004 referendum is overturned, they need only refer to the precipitous drop in applications that followed that decision to close off a loophole that exists nowhere else in Europe. That remains the case despite all of the dissimulation and lying by the Care Bears intent on further undermining our society in the interests of gombeen employers, rack-renting landlords and vote seeking lefties.

The abuse of our citizenship processes was the reason for the change in the criteria made in 2004. The continued mockery of an asylum process designed to aid people genuinely fleeing oppression is still evident on a smaller scale. If Fine Gael, Fianna Fáil, Sinn Féin and the other smaller parties get their way over the next few months that will grow far worse.

Brexit deal is bad for Ireland, but what’s new?