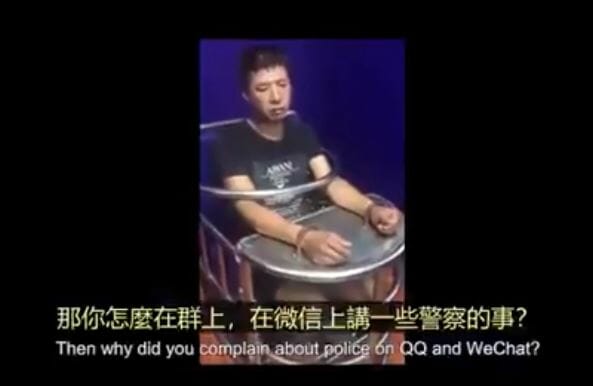 A new video from China shows a man being interrogated by police for criticizing the force on social media platforms QQ and WeChat. The footage, which shows the man handcuffed and bound to a table, has shed new light on the surveillance tactics used to monitor and suppress dissent within the Communist state.

The man appears to be very apologetic in the face of questioning, explaining that he only criticized police because he was drunk.

China spies on social media conversations. Then they bring dissidents in for a real-life chat. I’d say we’re AT LEAST five years away from that over here, so no worries. pic.twitter.com/HjXzqsgr8S

The video follows recent news that the Chinese government is creating a social credit system that will punish citizens who appear to be less than loyal to the state.

Under new rules the government can punish those who criticize the regime, as well as numerous other behaviors, such as:

– Buying too many computer games.
– Consuming too much junk food or alcohol.
– Contacting a friend with a low credit score .
– Having online friends with low credit scores.
– Posting “fake news”.
– Visiting unauthorized websites.

He said the Chinese Premier was a power-hungry clown. Then he vanished. Now Beijing says he’s being  investigated.