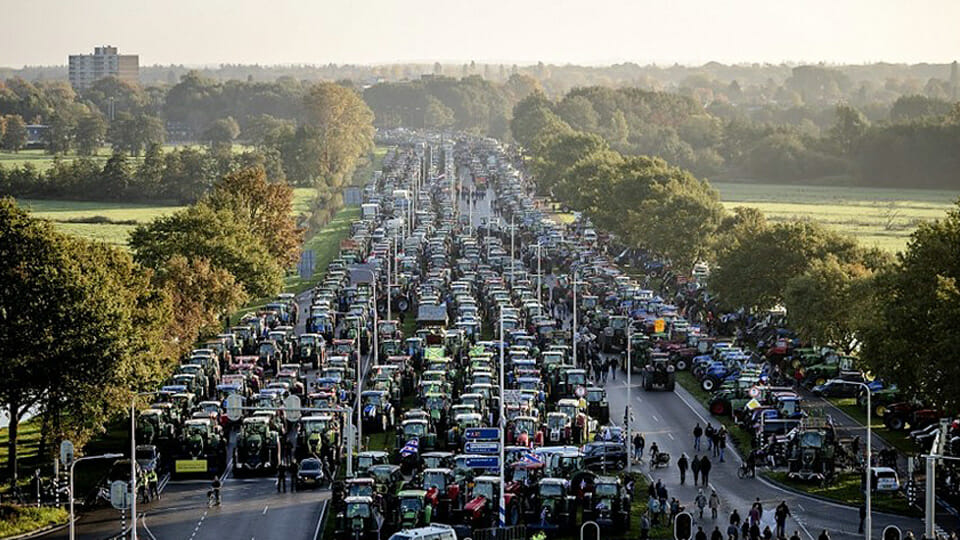 Thousands of Dutch farmers have descended on The Hague in their tractors after new rules were implemented to clamp down on nitrogen emissions from the agriculture sector, a move farmers says will cause untold damage to their livelihoods.

Earlier this year a Dutch court found that farming activities that emit large amounts of nitrogen, as well as certain construction projects, are in violation of environmental regulations created by the EU. Yesterday’s protest is third major rally by farmers.

Thousands of farmers are heading to Dutch government to protest against climate change measures.

Government willing to shut down half of the farms in an effort to control NO2, CO2 emissions.

“Over the past 20 years, the agricultural sector has moved back and forth along with the rules imposed by politicians,” said Eddy van Wezel, a farmer from Huijbergen, a village close to the Belgian border, who drove by tractor to the Dutch legislative capital with his young son. “Now farmers are forced to bear the brunt of emergency measures to combat nitrogen emissions.”

The country’s 12 provinces last week adopted new rules on nitrogen emissions. The new rules try to find some wiggle room on emissions by counting the actual number of animals being kept by a farmer, not the often higher number for which they have a permit. The resulting surplus could be transferred to other sectors, like construction companies, which have already exceeded their nitrogen emissions limits.

In the northern province of Groningen, police had to hold back farmers who tried to drive a tractor through the front door of the provincial assembly.

But farmers felt that they are being forced to bear most of the pain, and convoys of tractors converged on eight provincial assemblies on Monday.

In the northern province of Groningen, police had to hold back farmers who tried to drive a tractor through the front door of the provincial assembly. The building was pelted with eggs, and police from Germany were summoned to support their Dutch counterparts.

The legislative united front quickly collapsed. So far, three councils have scrapped the tighter rules, while one province has suspended them.

The central government condemned both the violence, and the decision by the four provincial assemblies to change their rules. The worry is that different rules between provinces will create a regulatory headache.

Other EU countries could soon face the same problems as the Netherlands.