Warfield isn’t a victim of bigotry: He benefits from it 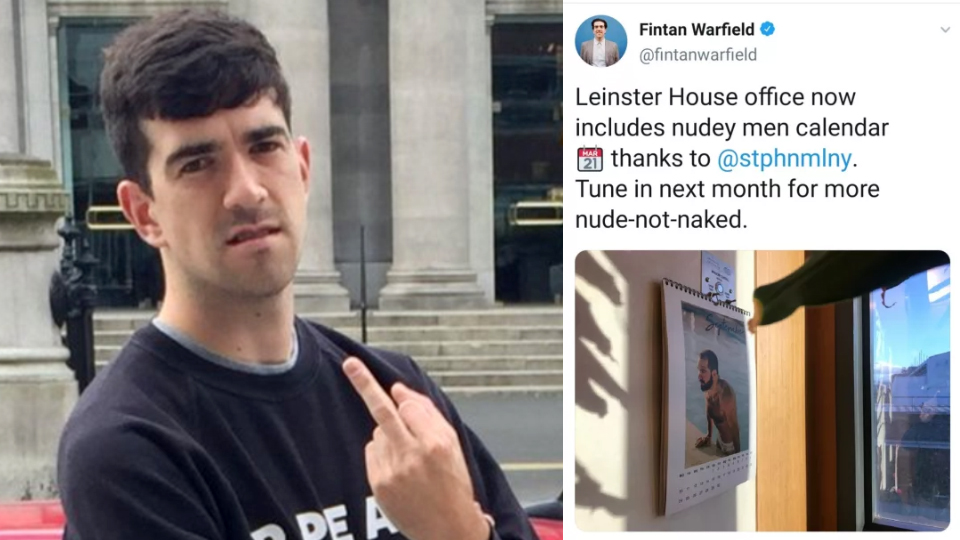 Imagine, for a moment, if you can, the reaction in Ireland’s newspapers and radio programmes if somebody like Micheal Healy-Rae, or Mattie McGrath, or Noel Grealish, or Ronan Mullen announced on social media that they had tastefully redecorated their Leinster House office with a calendar featuring scantily-clad, sexually appealing young women.

Just take a moment to think about the headlines, and the columns, in the newspapers. They would, of course, be denounced as misogynist, woman-hating, inappropriately behaving buffoons. There would be speculation that their offices were not a safe space for female staff. There would be long and meandering columns from people like Una Mullally about the backwards culture that still pervaded many workplaces, and so on.

And all of those criticisms would be totally correct.

Which is why it is strange, then, that when Sinn Fein Senator Fintan Warfield, who happens to be a gay man, shares an image of a calendar featuring sexually attractive, scantily clad men, that the consensus is that any criticism of Warfield is homophobic:

Second, that there is a fear of criticising any action by a gay politician for fear of being called homophobic. Both probably explain, in equal measure, the rather bizarre attacks on Peadar Tóibín and Aontú over the weekend.

Tóibín’s party, last week, posted a tweet criticising Senator Warfield for an old photo that appeared on Warfield’s Instagram page (oh, for the simpler days before social media). In the photo, Warfield is posing in his underwear, and a short tee shirt featuring the Pope:

Aontú accused Warfield of “purposefully trying to offend other people’s religious beliefs”. Whether that is true, or not true, is of course only something that Warfield knows. He would have to be very naïve, and our friends in the rest of the media would have to be very stupid, however, not to realise that the juxtaposition of an underwear shot with Catholicism, especially coming from somebody as relentlessly critical of the religion as Warfield is, would be seen as provocative by many.

One of the most annoying things about the modern world is the blatant refusal of many people to just call a spade, a spade. Warfield is, like so many young liberals in Ireland, openly and proudly anti-Catholic. He posted the photo as an act of rebellion against what he, and others, view as an oppressive religious heritage in Ireland. The message in the photo is very clear: “I am gay and proud and there is nothing that the Pope can do about it”. If the photo doesn’t offend Catholicism, there’d hardly have been any point posting it, would there?

But why, then, is it homophobic to criticise him for it, as Ellen Coyne, and the Irish Independent, predictably enough, alleged? And why is there such a double standard when it comes to criticising gay men?

Here’s a question, then, for the media: What is the non-homophobic way of expressing concern about Warfield’s policies, sartorial choices, and provocative behaviour?

How can you even raise your voice to question him without being homophobic?

Because many of those criticising Aontú, and calling them bigots for raising this question, had no problem at all, you might recall, criticising Mick Wallace for the way he dressed in parliament. Mick Wallace was called a slob, a mess, and much worse, just for wearing a tee shirt. But Warfield, by contrast, poses in tight underpants, and criticising him is homophobic? According to the very same people.

If you really push for an answer on the blatant double standard, you’ll get some gender studies gobbledygook about the historic oppression of gay men, but the answer itself will even then be an admission that there are different rules, in the progressive way of looking at things, for gay politicians.

The other thing, of course, is this: The media that spent the weekend criticising Tóibín for raising the issue of Warfield’s photos was very conspicuous in their refusal to show the offending photographs themselves. Why is that? Surely, if Tóibín’s criticism was so outrageous, and so beyond the pale, the media would have been lining up to say “look at this, can you believe these religious nuts are annoyed about an innocent photo like this?”

But of course, the photos were left out of the story – and we only got the tale of the “homophobic attack”.

The problem is that few people have the confidence, or the willingness, to say so out loud for fear of being criticised for it by the progressive Ayatollahs who dominate the media landscape in Ireland.

If Warfield was a straight man, and behaved as he does, the criticism from these self-same people of his behaviour would be relentless. There’s bigotry, and double standards in Ireland all right, but it’s not against gay male politicians. They can get away with things the rest of us would be excommunicated from polite society for.

California bill would force toy stores to be gender-neutral

In praise of Trumpism