Unlike Justine McCarthy, John McGuirk has never libelled a woman 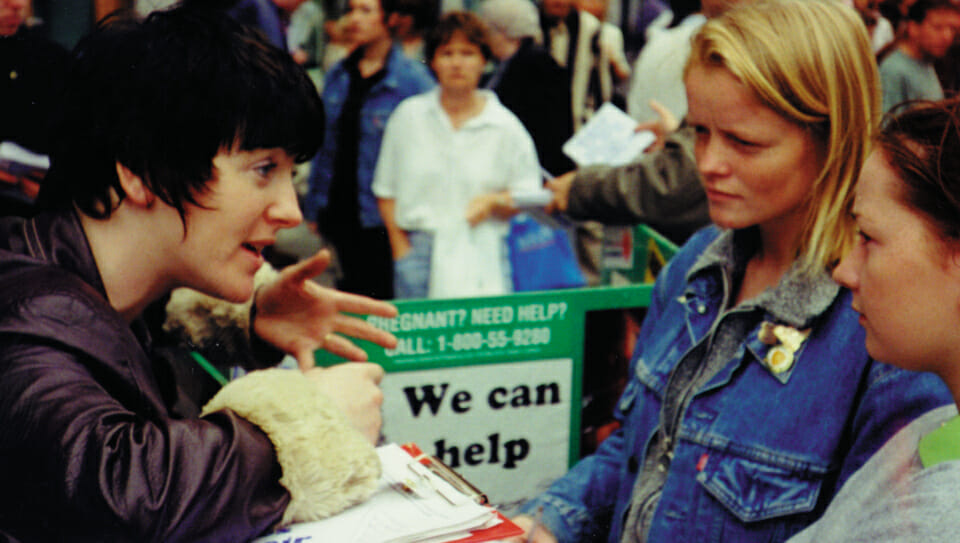 The author on a pro-life roadshow in 1997

When I was in my mid-twenties, journalist Justine McCarthy wrote a vicious article attacking me in the Irish Independent. Actually there were two articles, over two consecutive weeks, both a big splash covering the front page of what was then the weekend section of the paper.

I was reminded of that hatchet-job, and of winning the lengthy and tortuous libel battle it prompted, when I read her article from the weekend’s Sunday Times where she also tried to take a hatchet to John McGuirk, the editor of this news platform.

Her beef with McGuirk was ostensibly that he had been unfair to Kate O’Connell, the Fine Gael TD who lost her seat in the election on February 9th.

(As an aside, this insistence that women, from Hillary Clinton to Ruth Coppinger, lose elections because of ‘hashtag the patriarchy’ is ridiculous. Standing for election is tough, losing your seat must feel like a pretty awful personal rejection, and the electorate can be almost impossible to read, but losing out isn’t evidence of some conspiracy to keep women down.)

After listing some the things she didn’t like about McGuirk –  he’s a pro-lifer, writes for conservative outlets – McCarthy accused him of “gloating” over O’Connell’s loss and of driving “a stake through” her “political corpse”. She concluded that conservatives, like the Gript Editor one presumes, has it in for “smart, bold, opinionated, well-heeled independent women”.

If it was meant to be a take down of John McGuirk it wasn’t particularly effective. He didn’t say anything untrue about Kate O’Connell in his piece, or anything nasty, but his article did reveal that she wasn’t well-liked in her own party. I’m not privy to the internal machinations of Fine Gael, and I don’t know O’Connell at all, but in her public statements she often seemed sneering and vindictive, two traits that don’t tend to make men or women popular.

In fact, gloating is the word which exactly described O’Connell’s behaviour in the Dáil when the abortion legislation was being passed. Her taunts at pro-life TDs – “Ye lost and it must be hurting” – wasn’t just infantile, it was decidedly spiteful. My guess is that those sort of outbursts didn’t endear her to a lot of reluctant yes voters: people who voted for repeal because they were told abortion was necessary to save women, but were then horrified at the antics in Dublin Castle. Abortion isn’t something you whoop and cheer for, or form conga lines to celebrate.

McGuirk’s piece was popular precisely because it took a in-depth look at why a high-profile TD lost her seat, and revealed some of the inner conflicts in a party which had just been hammered by voters.

McCarthy took a different view. “It was a cleverly executed assassination, using a cocktail of proven facts, while omitting certain other facts, and seasoned with a generous sprinkling of hearsay and rumour,” she wrote.

Funny enough, much of that accusation could be levelled at McCarthy for what she wrote about me. But, in my case, she went a step further. In the course of trying to make me out to be as sinister and awful as possible she libelled me, and the Independent were eventually forced to pay out significant costs and damages, and obliged to print an apology.

Back in 1997, abortion was a red hot issue because the C case had hit the headlines. A young traveller girl had been raped and the State wanted to bring her for an abortion.

Journalists arrived up at the family’s caravan with cheap gifts wanting to get a story, but not one of them offered to actually help the family. Neither did any of the abortion campaigners or NGOs who were busy shouting about the need to repeal the 8th. The only help or compassion the distraught family ever received was from pro-lifers. In my experience, that’s always been the difference between the two camps on this issue.

In this instance, the media weren’t interested in anything but pushing the narrative that this tragic case showed that abortion was necessary. But they were interested in taking out anyone who disrupted that narrative.

It was strange to read a senior journalist in the most powerful newspaper in the country write about you and your family as if you were some sort of a cartel, right down to trying to paint where we went to Mass as being suspect. I remember friends and work colleagues being horrified by the relentless demonisation, but that was how the Irish media treated pro-life women who had the gall to be anything but meek and mild.

In this case, McCarthy overstepped the mark. Her attack piece clearly – and falsely – implied that I had been trained by violent people to attack abortion clinics. In the apology printed by the Irish Independent, the paper acknowledged that this was untrue and said I was a person of the highest integrity.

Everything Justine McCarthy wrote in her article about the world needing bold and opinionated women only applies to the women she and the rest of the establishment approves of. Women who think differently to the feminist elite can expect a good kicking.

But those women are entitled not to be defamed. And entitled to seek redress in the court. Let the record show that, unlike Justine McCarthy, John McGuirk has never obliged a newspaper to apologise in a court for libelling a woman.

A Tale of Two Taoisigh