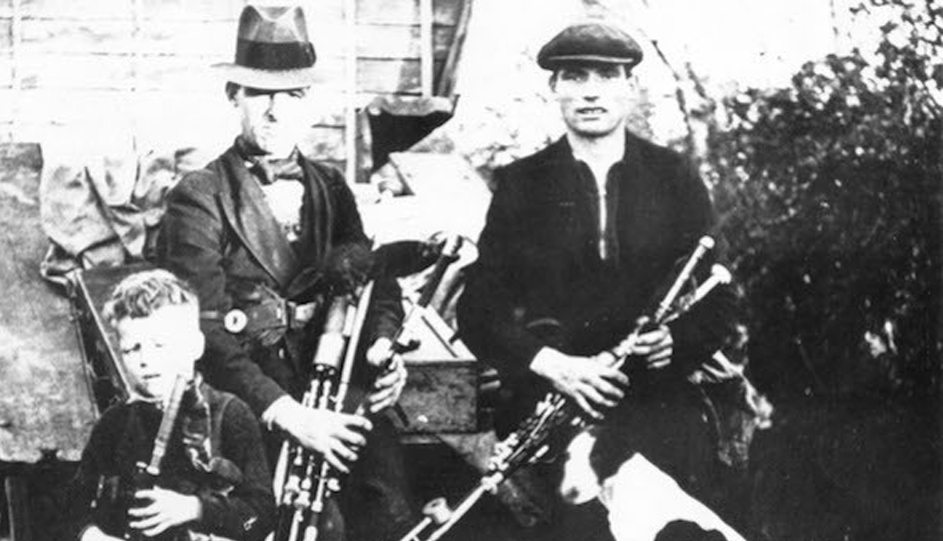 The Traveller Pride festival has been taking place since Monday for two weeks and it features a host of gifted and award-winning musicians and performers such as the traditional singer Thomas McCarthy and Ireland’s Got Talent star, Sharyn Ward.

Many of those taking part in the events point to the relentlessly negative portrayal of Travellers in the media and in online commentary, and it’s certainly true that the community’s rich heritage of traditional music and song is rarely highlighted.

From the great pipers to the singers and storytellers, the Travellers’ contribution to Irish traditional music is worth celebrating.

Johnny Doran from Rathnew in Wicklow was an extraordinarily gifted travelling musician and is recognised as one the greatest uilleann pipers known to traditional music. He influenced and inspired many other notable musicians such as Willie Clancy and Seán Reid. He came from a long line of musicians, singers and dancers, and his brother Felix was another superb piper.

In this recording made by the Irish Folklore Commission at the prompting of the piper’s great friend, John Kelly (a tremendous musician in his own right), Johnny Doran plays three reels, Colonel Fraser, My Love Is In America and Rakish Paddy. This is remarkable, masterful playing by a musician in complete command of his instrument and immersed in the long tradition of his people.

Other noted piping Traveller families include the Keenans and the Fureys who are known on the global stage for songs like Sweet Sixteen, which Sharyn Ward also sang so memorably on Ireland’s Got Talent.

The Furey brothers had two Top 40 British albums called Golden Days and At the End of the Day and their songs often emphasise the importance of family and of the tight community bonds so prevalent in Traveller communities, like this beautiful song from Finbar Furey remembering his mother.

Finbar’s father, Ted Furey, was a renowned fiddle player like another famous Irish Traveller musician, the fiddle player, storyteller and singer John Doherty from Donegal, a musical genius who influenced whole generations of musicians including Mairéad Ní Mhaonaigh of Altan. A travelling tinsmith, Doherty was entirely self-taught and counted amongst his musical descendants Tarlach Mac Suibhne, An Píobaire Mór, from the 18th century.

His style encompassed the tradition of Donegal fiddling but made it his own with a virtuosity noted for precise and dramatic finger work and bowing.

Thomas McCarthy who performed on Facebook Live last night is a Traveller from Birr, whose family has kept the wonderful tradition of unaccompanied singing strong. His easy, gentle style is noted for the rich variations and the expression he brings to the story in the songs. He was award Amhránaí na Bliana/Traditional Singer of the Year at the TG4 Gradam Ceoil in 2019.

Here he is singing They’re Moving Us On Again.

Liam Weldon, a powerful singer and lifelong community activist from Ballyfermot, penned many a beautiful song including this stirring ode to the Travellers:  “The Blue Tar Road”. He had learned songs from the Travellers who used to stay in his granny’s yard in the Liberties when he was a boy and had great affinity with the community.

Weldon’s singing captures the essence of life on the road and the hardships Travellers faced that were exacerbated by the often-brutal opposition of the authorities. He excoriates “Dublin Corporation, good Christians to a man” who “tore down our tents uprooted us and towed out our caravans.” Travellers were sent, Weldon says, “to Cherry Orchard, where no cherry blossoms grow”. But he adds “the man above who died for love, and nailed onto a tree. Sure wasn’t he a traveller, the same as you and me.”

The legendary singer and musician Pecker (Patrick) Dunne was a Traveller born in a horse-drawn caravan from Mayo, though his people were from Wexford and Galway. His father was known as The Fiddler Dunne.

Pecker was known far and wide as a gifted travelling troubadour. He played with the Dubliners on tour and appeared with Richard Harris in the film ‘ Trojan Eddie’. He was also a composer, and there’s a great depth and strength in his singing and a lonesome note in this song of his, Sullivan’s John,

John Connors, the famed actor, director and Traveller advocate recently sang one of Pecker Dunne’s compositions on the Tommy Tiernan show. He has that natural ease and power in his singing that he says comes from the tradition of music around the campfire.

Tinker's Lullaby – John Connors A song written by the great Pecker Dunne and performed at A Celebration of Traveller Culture by actor John Connors. The words have become more poignant ever since the Carrickmines tragedy where 10 young Irish Travellers recently lost their lives.Thanks to Paul Reynolds for the recording (Dec 2014) www.youtube.com/watch?v=r7tOQ4YrFi4

Posted by The Cobblestone on Wednesday, 9 December 2015

His Nan, Chrissie Ward, regularly posts videos  featuring and remembering those old traditions including poetry, storytelling, music and song. She’s a natural artist and a great champion of Traveller culture.

Long may it continue and be celebrated.