Time to cancel Netflix, ‘Cuties’, and the normalisation of paedophilia

Last night, Netflix uploaded ‘Cuties’. It’s not as bad as people thought it would be: it’s worse.

This is soft-porn featuring children – and its being streamed into your home and feted by idiot critics who are either too dumb to call out the hyper-sexualisation of 11 year old girls, or aren’t bothered by it.

A running debate has been taking place on social media all day, and #CancelNetflix is trending everywhere. As more than one commentator observed, there’s a line no-one should cross in telling a story or making a film, and Netflix just crossed it in a big way.

After the furore about their promotional poster, Netflix appeared to backtrack, changing the marketing visuals and removing the word ‘twerking’ from descriptions of the film. None of that really mattered, of course, what’s important is what’s actually in the movie.

Normalising paedophilia is a fair description. It’s like watching a child doing a lap dance or working in a sex club, and it’s deeply, deeply disturbing and nauseating.

These are children – 11 year olds – and they are being filmed and portrayed as gyrating, grinding, pouting, panting sex-objects, wearing tight shorts and bra-tops, sucking their fingers suggestively, and touching themselves. If you’re a normal person, and especially if you’re a parent, this will actually make you feel sick.

The Netflix claim that Cuties is a commentary about the over-sexualisation of children simply doesn’t wash. The children in this movie don’t just act like twerking strippers in one scene, it’s repeated again and again, and filmed in a way that is both explicit and horrendously exploitative.

Who thought it was a good idea to have the camera repeatedly focus in on the twerking buttocks and crotches of 11-year old children? Who decided to show little girls acting out sexually explicit moves again and again? Why is the main character, Amy, photographing her genitalia or dry humping the ground?

What instructions did the director and the choreographer on the Cuties set give to 11 year old girls when they were telling them to simulate sexual moves in at least four extended scenes?

And who the hell were the wealthy and powerful Netflix executives who signed off on this movie, knowing what was in it and how children were being hyper-sexualised? There are serious, immediate questions to be asked of the people who commissioned a film which shows 11-year olds gyrating and grinding, and then attempts to sell it as being liberating.

Because Cuties is child pornography wrapped up in a bogus art bow, a host of halfwit commentators and reviewers are rushing forward to claim a movie with twerking little girls is “important” and “honest” and “brave”.  The Telegraph’s critic led with the appalling assertion that “the movie was a provocative powder-keg for an age terrified of child sexuality”. What a disturbing choice of words.

Ratings on sites like Rotten Tomatoes show how hugely out of touch those critics are. Industry metrics showed that Netflix subscribers were massively avoiding the movie, and on Rotten Tomatoes the audience score of 4% was a stark contrast to the critic’s rating of 88%. The trailer, even though it’s scrubbed of the worst of the movie, has a massive 1.4 million dislikes (against 40 thousands likes) on YouTube. 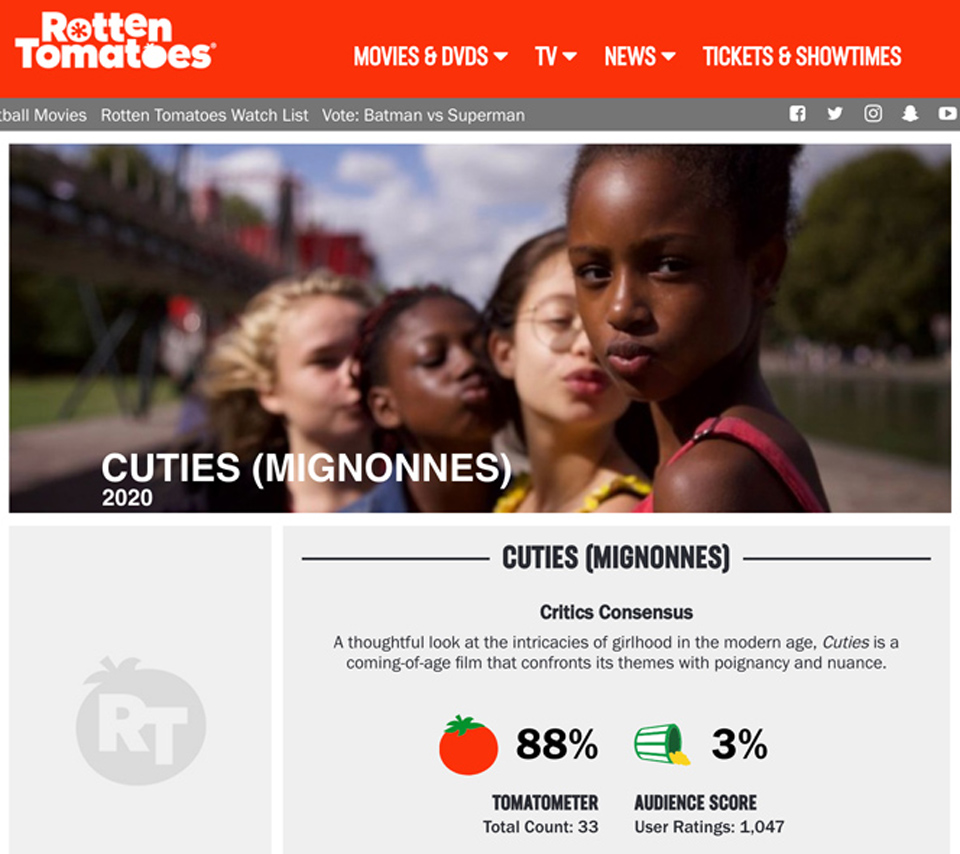 Defenders of Cuties trotted out several old reliables used to defend the indefensible, including the gender of its writer and director, as if fighting the patriarchy neutralises the harm of sexualising children. The usual suspects (the New Yorker for example) decided that anyone who doesn’t like Cuties is right wing or (gasp) a conservative. That’s fine. If the progressives are on the side of crotch-shots of 11-year olds twerking, they’re welcome to that label.

Despite all Neflix’s denials, their intention with the movie is clear. We’re told the young girl rebels against her ‘conservative family’ (because obviously any family who thinks their 11 year-old shouldn’t be acting out the sexual fantasies of a grimy pervert are such awful squares) and becomes fascinated by a ‘free-spirited’ dance crew. Free-spirited used to mean climbing trees or skipping school – now it’s acting like a hooker on stage when you’re still a child, apparently.

Acting out every paedos fantasy is ’empowering and liberating’ according to the free-spirited executives at Netflix who are too tuned into an era where strippers and self-described ‘hoes’ like Cardi B seem to be the new pinnacle of 100 years of feminism.

Activist Lila Rose ran Cuties through the Fifth Court ‘Dost test’ used to determine if the images are child porn. The six factors include: whether the focal point of the visual depiction is on the child’s genitalia or pubic area; whether the setting of the depiction is sexually suggestive, that is, in a place or pose associated with sexual activity; and whether the visual depiction suggests sexual coyness or a willingness to engage in sexual activity. It’s very hard to see how Cuties doesn’t fail the Dost test. The girls involved in this deeply unsettling movie are children, well below the age of consent, and their ability to consent is also a huge issue in this controversy.

A lot of people have observed that if you subscribe to Netflix’s mass produced garbage, you’re sponsoring the sexualisation of children and the normalisation of pedophilic fantasies. Cancel your subscription. There’s plenty of other stuff to watch. You won’t miss it.

Note: I decided not to embed the video of the Cuties dance scene in the article as even watching it felt exploitative and grubby. However, as one commentator on social media noted sometimes people need the evidence of their own eyes. If you need to explain why this movie should cause you to cancel Netflix, the scenes can be found here

The Texas power crisis — will it happen again?