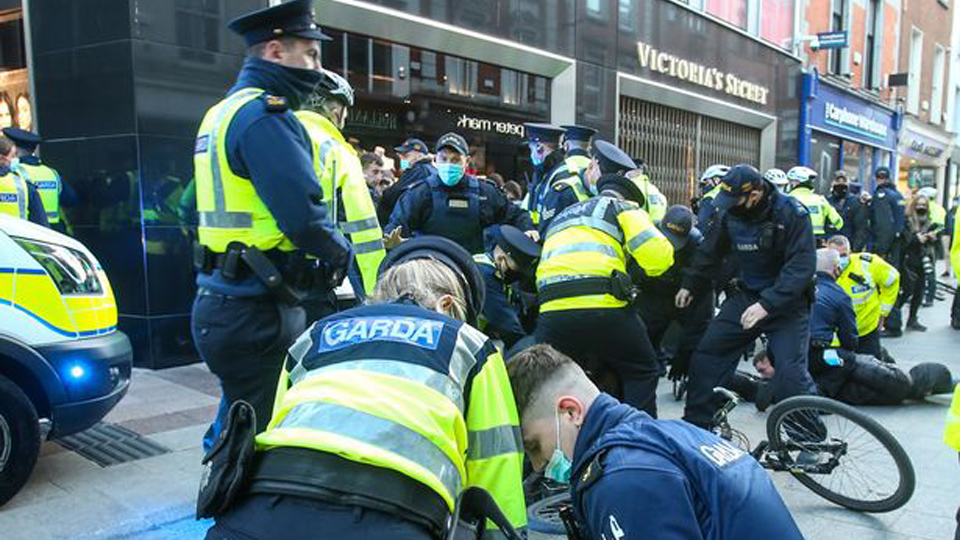 On Friday, the Garda Commissioner Drew Harris said something that was, given its context, infinitely revealing.

Speaking at a press conference, he addressed the use of batons and excessive force by Gardaí against lockdown protestors on Grafton Street on Thursday. He also welcomed the additional enforcement powers given to the Gardai to sanction people who breached Covid-19 regulations.

When asked if this contradicted what he had said previously about the Gardaí not wanting “authoritarian powers” to break up gatherings in private homes, Commissioner Harris said that he was a “faithful public servant” and would do “as I’m told”.

One wonders, then, if he was told to deal with protestors on Thursday in a manner which would act as a strong deterrent to anyone else who dared to take public action against what many perceive to be a unjustified and harmful lockdown.

Despite Commissioner Harris’s denials, the Gardai’s actions on Grafton Street on Thursday do not seem justified. Hundreds of Gardai were out in force against a small number of people, who, in a free country, should be free to protest.

This is not about face-masks or vaccines or whether Covid-19 is a scam (something I don’t believe). It’s a much more fundamental point than that. A state that denies its people the right to protest peacefully takes a dangerous step towards authoritarianism.

The only time free speech actually matters is when powerful people want it curtailed. And it doesn’t matter a damn if what protestors are saying is unpopular or wrong or daft. A country that only protects popular speech or state-sanctioned protest is not free at all. That sort of freedom is the delusion of slaves.

There’s something very ugly about the police force of a free and democratic country drawing batons and beating down its own people. This is especially true when a lockdown is being enforced by the same police force, who now have the power to fine or imprison people for breaking these draconian laws.

The far-fetched claims that anti-lockdown protestors were aiming – or able to – dismantle the structures of the State by marching on the Convention Centre or up Grafton Street are frankly preposterous. It was evident from the beginning that the Gardai had been told to arrest protestors and to exercise enough force to discourage future protests.

Large numbers of Gardai were employed across the city centre, blocking up Grafton Street with dozens of police vans which weren’t there for any purpose but to bring protestors to the station. There is no evidence from any videos I saw that protestors were threatening violence against members of the force.

According to the Irish Times, the Gardai were determined to prevent the protestors from marching up Grafton Street. “A number of gardaí used batons to overpower protesters before pinning them on the ground and handcuffing them,” the paper confirmed.

A Polish media platform has a video of some of what happened on Grafton Street. It should make for uncomfortable watching. The Gardai are using batons to beat people in order to subdue them for arrest. One Garda knees a protester repeatedly. In this video, at least, the protestors seem to be holding their hands up.

Another video showed some of a speech given on O’Connell Bridge by a lorry-driver from Finglas who was angry and upset at what the lockdown had done to his community. He talked about the rise in suicide rates and the damage being done by job losses, and said that he feels freedom is being taken away from the Irish people.

I wonder if batons would have been drawn if the protestors were from Foxrock rather than Finglas? There’s more than a whiff of nasty prejudice about the comments on social media calling the protestors ‘wasters’ and ‘scum’. It’s notable, too, that previous protests – including one on Wednesday of this week – attracted no such reaction from the Gardai especially when they were espousing woke causes. Leo Varadkar even previously tweeted his support for one such lockdown breach because it was in support of a fashionable cause, Back Lives Matter.

There’s plenty of evidence that proves that the lorry driver who spoke on Thursday is correct in his assertions about the disproportionate damage being done by the Covid restrictions to working class communities. We are not all in this together, despite the trite slogans.  Poorer people are more likely to see their jobs lost, their children fall behind at school, and their communities lose investment because of a lockdown that is increasingly being shown to be unnecessary and unjustified.

Today I spoke to someone who, unable to see any light in the darkness, and caught in a distressing spiral of loss and anxiety, tried to take her own life two weeks ago. The services which had helped her previously have been seriously curtailed because of Covid19 or are now only available on the phone. There are too many people who have no safety net, nor the access to assistance private health insurance would bring to stave off despair. Many people feel helpless, angry, and left behind.

Now they know if they come out to speak up, they will be, quite literally, beaten down.

Batons belting down on protestors invoke memories of the DMP in 1913, assaulting civilians at the behest of the government: being ‘faithful servants’ and also doing ‘what they were told’. At that time, leaders like James Connolly helped to organise ordinary people and articulate their concerns.

A hundred years later, James Connolly must be turning in his grave. This time, when working class Dubs were being batoned, the left, busy supporting the establishment-enforced lockdown, cheered it on.

The Labour Party founded by Connolly has, of course, long lost interest in ordinary working people. Theirs is the caviar socialism of Dún Laoghaire and Sandymount. The anger and suffering of the less well-off during this enforced lockdown doesn’t seem to be their concern.

The red flag wavers in People Before Profit and Sinn Féin, much like the Victorians before them, seem to have decided that there’s a new category of the ‘deserving poor’ – those who fret about woke issues and support the lockdown, and those who have the audacity to think for themselves and are therefore ‘the fash’ and deserving of a baton thwack to the head. The gloating of their supporters on social media on Thursday was disgusting.

How distorted does your socialism have to be when you automatically describe ordinary people who are upset – and disproportionately affected by this never-ending lockdown – as ‘far-right’ or even ‘fascist’. It is disquieting that the voices of the establishment left and right are so united in their desire to squash protest against this unprecedented curtailment of civil liberties. Watching the videos from Thursday felt like the stirrings of a class war: the upset of a people  who have long been left behind by both the suits in Fine Gael and the fake socialists in Sinn Féin and PBP.

Drew Harris claimed that Gardaí actions were necessary because of the violence caused by extremists in recent protests. But as Brenda Power pointed out in the Sunday Times last week, that violence has mostly come from left-wing thugs who set out to attack protests.

It would be a seriously troubling and regressive step if the Gardaí were to continue to use force against legitimate protest especially if they are acting under the direction of a State which seeks to quell dissent against the Covid lockdown. While most Gardai are decent people, being a ‘faithful servant’ of a state which seeks to quell the right to protest will land the force on the wrong side of history.