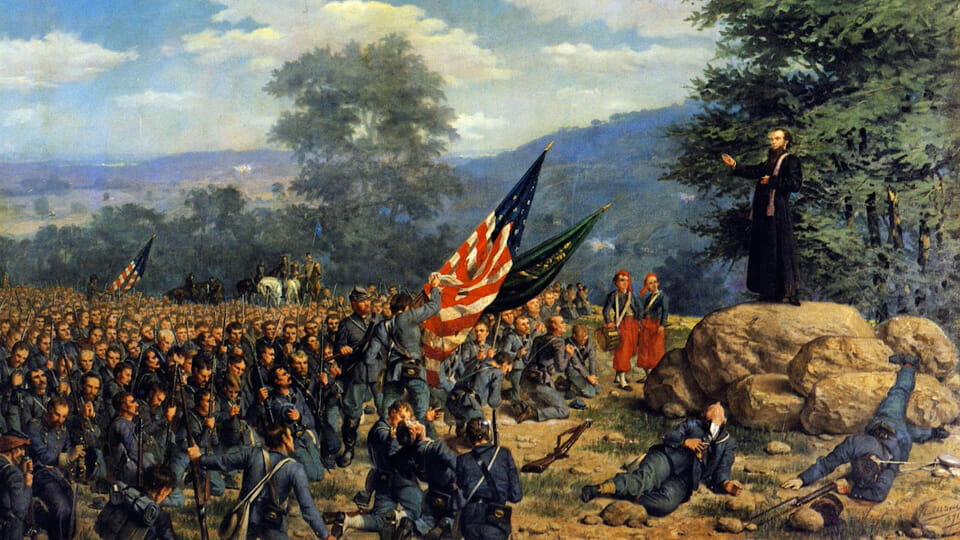 The first two casualties of the American Civil War were suffered at Fort Sumpter, South Carolina, on April 12th, 1861, when southern, pro-slavery forces fired on the garrison of the US Army. Daniel Hough was 36 years old, from Tipperary, and Edward Galloway, whose age has not been recorded, was from Cork. Both men had emigrated during the famine, and joined the US Army.

They were among hundreds of thousands of people who fled Ireland for America during the famine years. And not long after arriving in the US, they found themselves embroiled in a civil war that was primarily fought over the question of whether black people could be kept as slaves.

The record of Irish immigrants in that conflict is not unblemished. In the beginning of the conflict, there was substantial resistance, in Irish communities, to the war. In New York and Detroit in 1863, four days of rioting broke out in Irish communities in resistance to President Lincoln’s order to draft soldiers into the Union Army. In Detroit in particular, these riots were also accompanied by racial conflicts with black workers in the city, over fears that newly freed slaves in the south would migrate north, and take jobs from the Irish immigrants who held them.

In the south, though mainly as an accident of geography, some Irish fought for the confederacy. Major General Patrick Cleburne, for example, was born in Ballincollig, and was one of six Irish-born generals to fight for the South.

But the overwhelming majority of Irish involvement in that war was voluntary, and in the service of the Union.

150,000 Irish soldiers fought for Abraham Lincoln. At the battle of Fredericksburg in 1862, the Irish brigade suffered devastating losses in an attempt to claim the high ground from the confederate army lead by Robert E. Lee. 1600 Irish men started that battle. By the end of it, only 256 were left standing.

Elsewhere, 277 Irish men of the 9th Massachusetts infantry regiment lost their lives in the war. In Boston’s public garden today, a statue memorialises Colonel Thomas Cass, commander of the 9th Massachusetts, who was born in Laois in 1821, and who died of his wounds at the age of 41, in 1862, after being hit by a confederate bullet at the battle of Malvern hill. 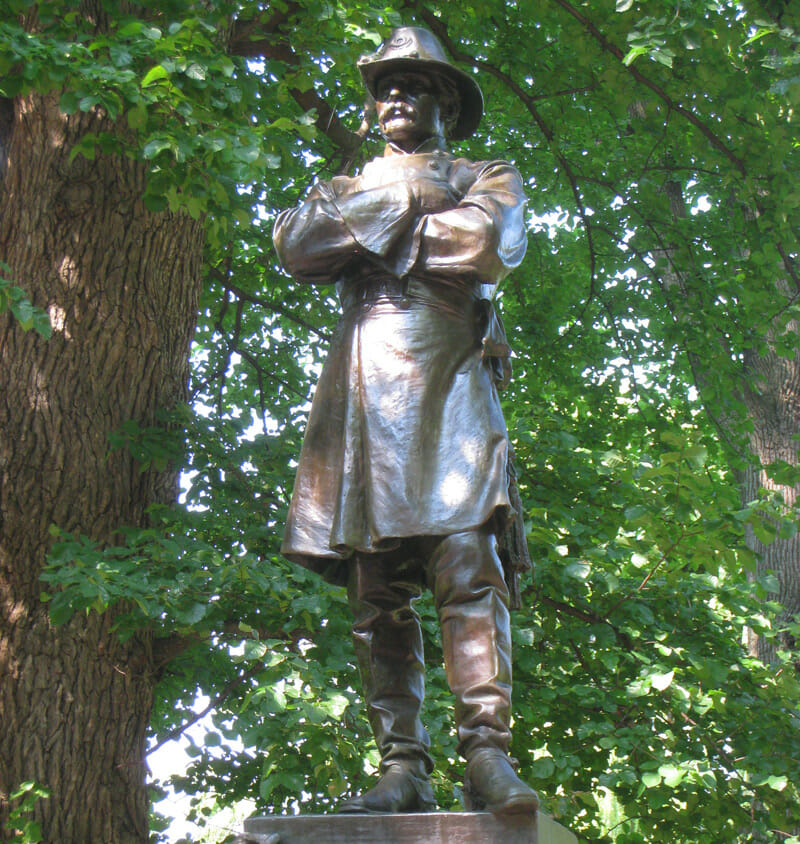 The statue of Col. Cass in Boston’s public garden

This week, there has been some attempt, elsewhere in the media, to import American racial politics to Ireland, and to suggest that Ireland is a “racist country”. But the single greatest blow against anti-black racism in the history of the world was struck largely with the help of Irish emigrants who gave their lives to free America’s slaves.

Of all the units, on either side of the American civil war, only two lost more men in the course of the conflict than the Irish brigade. They fought 23 full scale battles, and by the end of the war, 80% of the men who had joined up had been killed or wounded.

At the site of the battle of Gettysburg today, a monument stands to the Irish brigade, and the Irish soldiers who gave their lives on the bloodiest day of the civil war. It’s a celtic cross, with a mourning Irish wolfhound at the bottom. The wolfhound’s name, for she was a real dog, was Fan. In the history of the brigade, her story is told on page 405:

“She was very much attached to a man of the company, who during the firing fell mortally wounded. When Fan came up to him, she threw herself on him and cried, she wept and licked him, while the poor fellow would throw out his hand to pat her as he feebly exclaimed, ‘Poor Fan!’”

The Irish brigade monument at Gettysburg depicts the brigade’s Irish Wolfhound, Fan, in mourning for her owner, who was killed by a confederate bullet. She comforted and licked him, and cried over him, as he died.

The bravery of Irish soldiers, and their losses in that battle, is recounted elsewhere:

A brave Irish colonel, Patrick O’Rorke, of the 140th New York, of Rochester, N.Y., died with many of his men defending the west side of Little Round Top on July 2. O’Rorke, for whom Gettysburg’s well-known, modern-day Irish tavern is named, hailed from County Cavan and his regiment included two companies that were predominantly Irish.

Capt. James McKay Rorty , of Donegal, who had once made a daring escape from a Confederate prison, was killed while desperately trying to keep one of the guns of his Battery B, 1st New York Artillery, in action during Pickett’s Charge. Derry-born Col. James F.X. Huston was killed on July 2, while trying to rally his 82nd New York near the Peach Orchard as the assault of Longstreet’s Corps rolled over it.

Many of the Irish who fought so bravely in that war are memorialised on the battlefields of the United States. If you ever have a chance to visit Gettysburg, you should.

The painting at the top of this post is housed in Notre Dame university, and is called “absolution under fire”. It depicts the brigade’s Catholic Chaplain, William Corby, giving a blessing to the men who were about to die at Gettysburg.

In this era of remembrance, and this time of renewed racial tensions in the US, it might be an idea, rather than focusing on the idea that Ireland is in some way a racist country, for us to spend some time, and money, here at home to honour the memories of the thousands of Irish soldiers who fled a famine at home, only to lay down their lives on American soil so that slaves might be freed.

It’s one of our greatest stories, and it’s too often forgotten.