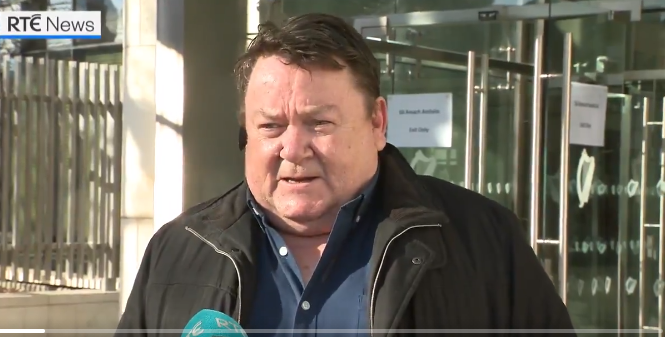 A powerful interview on the steps of the criminal courts, yesterday afternoon, after former Terenure College Rugby Coach, John McClean, was sent to prison for eight years. Damien Hetherington, one of his victims, was in court to hear the verdict, and stepped in front of the cameras when it was all over.

The whole thing is worth watching because Hetherington just radiates goodness and decency here:

"The dogs in the street were barking about this particular individual for the 30 years that he was there, but he was still left there", survivor Damien Hetherington says, as a retired teacher is jailed for abusing boys, adding "there's no real winners". | https://t.co/fBga4EwqSF pic.twitter.com/lBXokywSab

“The dogs on the street were barking about this particular individual for 30 years”, he says, meaning McClean. And yet nothing was done until, he says, Gemma O’Doherty started chasing the story down. That’s obviously the kind of statement that will be deeply wrenching for some people, who’ll be torn between their sympathy for the victims here, and their unwillingness to say anything nice whatsoever about Gemma O’Doherty, who is, as Hetherington notes above, something of a “punching bag” these days.

But that’s to miss the point somewhat. The real issue isn’t what Gemma O’Doherty – or anyone else – did.

It’s what the state, and the school, and generations of parents, failed to do.

McClean was allowed to continue in his post for thirty long years, and for nearly all of that time, by all accounts, there were whispers about him. In a statement to RTE, Terenure College – which is one of Dublin’s top fee-paying schools, incidentally – said that “they are deeply sorry and apologise unreservedly to the former pupils who were abused as young students.”

We do not yet know, in truth, exactly how many victims he had. Many of them are still coming forward. O’Doherty was able to assemble a sufficient number of men willing to speak out in order to make a prosecution viable, but by no means did she find all his victims. By the time this is over, McClean might turn out to have been one of Ireland’s most prolific, and vicious, serial paedophiles.

The damage he did is indescribable. Listen to the regret in Hetherington’s voice above, when he talks about the jokes he used to make with his father, who spend considerable sums of money to send him to Terenure, only to watch him drop out before his Inter (junior) cert. For much of his life, Hetherington has had to live with the knowledge that he disappointed his father, while his father didn’t know the real reason that his son didn’t want to go to school.

How many other men have been carrying this kind of burden around with them for years? How many took their own lives, or descended into alcoholism, or other self-abusive behaviour, to cope? We don’t yet know, but we should have known.

Gemma O’Doherty, whatever else one might say about her, does not have any superpowers or special abilities that the authorities in Terenure College lack. She’s not a mind reader. She doesn’t have the power to uncover secrets in her sleep. All she did (and this is not an effort to take credit from her) in this instance, was to listen to the whispers, and start asking questions about them.

In too many cases, in Ireland, whispers were not listened to, and no questions were asked. It’s a recurring pattern, and, if this case is anything to go by, it’s an ongoing one. “The dogs in the street knew” is a phrase we’ve heard employed over the years about mother and baby homes, priestly sex abusers, teachers, and sports coaches. And yet, as often as the dogs in the street know things, very few of them seem willing to bark. Why is that?

Part of it, surely, is fear of being the only one to speak out. Or fear of being the first one to speak out. If a lone victim had come forward about McClean, they’d have been in a very vulnerable position. Abusers like him often make sure that they have a pipeline of boys or girls leaving their care who they never abused, and are oblivious of the truth, and willing to be character witnesses. A lone victim speaking out will often face into a blizzard of “well he taught me for five years and I only have good things to say” statements. To speak out, you have to risk being the only one, and losing a lot.

But nonetheless, speak out they did. This was first reported to the Gardai, as Hetherington says above, in 1995. Despite that, Gemma O’Doherty appears to have been the only journalist with the tenacity to hunt the story down, stick with it, and consistently believe and encourage the victims. “If it wasn’t for Gemma O’Doherty, none of us would be here today”, he says. It was her reporting, he says, that “put the gun to the head” of the authorities.

She gets a lot of criticism, including some from yours truly, and much of that is deserved. But this time, it’s important to note, she was right. And she deserves the nation’s thanks for it.