Sinn Fein: We’ll let your children take you to court to change their gender 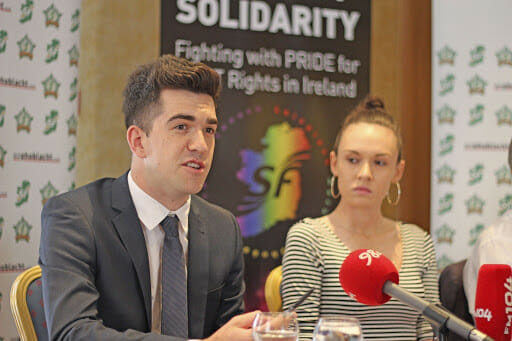 Sinn Fein in Government would allow children under the age of 16 to take their parents to court in order to change their legal gender without the parents consent, Sinn Fein’s LGBTI spokesman has said at a pre-election hustings.

Senator Fintan Warfield was speaking at a hustings organised by “BelongTo”, which is a taxpayer funded lobby group on gay rights issues.

Gender recognition means that a person’s gender is legally changed from male to female, or vice versa, on all official documents, including their birth certificate. Sinn Fein’s policy, if enacted, would mean that children under the age of sixteen could be formally declared by the state to have a different gender, and have all of their official documents changed, without the consent of their parents.

In such circumstances, a child who believed that they were born in the wrong body would be able, through teachers and social workers, to fight their parents for the right to be declared the opposite gender. A court would make the final decision.

At present, parents must give their consent for gender recognition in a case where a child wants to change their gender.

Warfield’s comments come at 41 minutes and 30 seconds into the video of the event posted on the Gay Community News website, which can be found here.

In recent years, grave concerns have been raised by mental health professionals that young children are being put under pressure to change their genders by ideologically driven transgender activists. As the UK’s Guardian, a left wing newspaper, reported last year:

“School counsellors and mental health service providers are bowing to pressures from ‘highly politicised’ transgender groups to affirm children’s beliefs that they were born the wrong sex, a leading expert has warned.

Marcus Evans, a psychotherapist and ex-governor of the Tavistock and Portman NHS Foundation Trust, whose Gender Identity Development Service (GIDS) is the only NHS clinic to provide gender counselling and transitioning, said many experts were living in fear of being labelled transphobic, which was having an impact on their objectivity.

“I believe the trans political agenda has encroached on the clinical environment surrounding and within the Gender Identity Development Service,” Evans told the Observer. “Young people need an independent clinical service that has the long-term interests of the patient at heart. To some extent, this requires a capacity to stand up to pressure coming from various sources: from the young person, their family, peer groups, online and social networking pressures and from highly politicised pro-trans groups.”

The GCN event featured representatives from all the major political parties, who answered various questions posed by a range of taxpayer funded activist and lobby groups focused on LBGT issues. There was no substantive disagreement between the party representatives on any issue raised at the hustings.

Does the fake polling story matter?

Toibín: SF a “disappointment”, opposition “collaborating” with the government