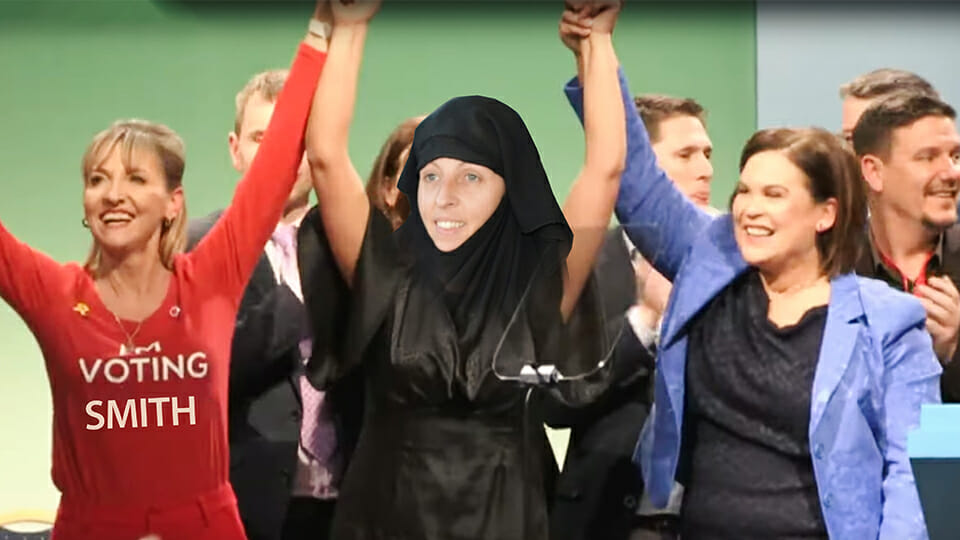 Lisa Smith just had the X-Factor according to Mary-Lou McDonald after she was selected to run for Sinn Féin in the Louth constituency ahead of the next general election.

Smith has big boots to fill as Gerry Adams retires from years of service in the area, and also calls time on his political career.

Responding to claims that Sinn Féin were irresponsible in selecting Smith, Mary-Lou McDonald said that her party would continue to speak up for the hard-working people of Ireland, and that Smith had shown everyone her dedication to building a fairer caliphate for all.

“These are the only black and tans we’ll be supporting”, shouted Mary-Lou amid rapturous cries of ‘Allahu Akbar’ from supporters, “and you can tell all the begrudgers to take a running jump off…”, at which point the microphone was cut and Smith awkwardly averted her gaze.

Speaking to reporters after her selection, the Dundalk native said that Arabic language rights would be high on her priority list, and, if elected, she would seek to establish an Islamic Republican Army branch to take back the GPO for Allah.

Asked about her time with ISIS, Ms. Smith said she had learned many valuable lessons about dealing with corruption, and that the spiked railings around Dáil Éireann could finally be put to good use if TDs step out of line.

84% of people wanted a statue of Kevin Barry in Finglas. So why are Dublin City Council refusing to listen?