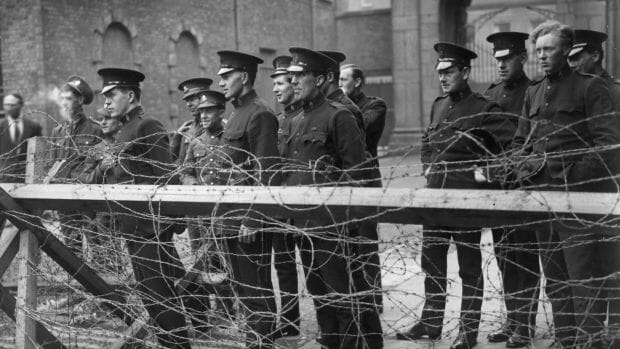 Peadar Toibin wrote movingly and well on this website yesterday about his principled objections to the Government’s now-cancelled commemoration for members of the Royal Irish Constabulary and Dublin Metropolitan Police:

“There are few families in Ireland that do not have mixed heritage. One of my Grandparents was a member of Cumann na mBan, while another Grand Uncle fought and died as a British Army solider in World War 1. Another Grand Aunt married an RIC man. Ireland today is sum of all its diverse historical parts. The death of one family member, on a personal level, hurts the same and leaves the same family legacy no matter what their background.

However the rights and wrongs are unambiguous. RIC and Black & Tan “soliders” imposing oppression through violence should not be commemorated equally with Volunteers seeking Irish freedom. Charlie Flanagan misunderstands the meaning of pluralism. It does not mean truth and justice are binned. The planned RIC/Black and Tan commemoration in Dublin Castle should be cancelled.”

Through the efforts of Peadar, and many others, the event has, indeed, now been cancelled.

It should never have been planned in the first place. It has opened wounds that had, at long last, begun to heal.

Indeed, opening these wounds is one of the main reasons that we should approach this whole business of commemoration with great care, and indeed, we should question the extent to which it is a good idea in the first place. We had, in 2016, a commemoration of the declaration of independence. Ireland’s declaration of independence is a good document, full of noble ideas and clarity of purpose. It’s something we can all unite around. We really should have left it there.

One of the odd things about the RIC commemoration is that the state will, probably in a year or two, be commemorating RIC men anyway, and calling them brave heroes. History isn’t very simple, or black and white, and it’s a bit inconvenient for many to note that after independence, many RIC men switched the crown on their helmets for a harp, and became the servants of the free state. Many of them fought in the civil war, and died. And so we’ll have the bizarre paradox of the state refusing to commemorate someone in 2020 because their organisation killed fellow Irishmen, and the same state actively commemorating those same people a few years later because their organisation killed their fellow Irishmen, but had a different sticker on it while it did. “They might have been bastards”, you might say, “but by 1923, they were our bastards”. Or heroes. Or just people trying to do what they thought was right.

“The ambush party of eight men, nominally led by Séumas Robinson, attacked two Royal Irish Constabulary men who were escorting explosives to a quarry. The two policemen, James McDonnell and Patrick O’Connell, were fatally shot during the incident. The ambush is considered to be the first incident of the Irish War of Independence.

“…we took the action deliberately, having thought over the matter and talked it over between us. [Seán] Treacy had stated to me that the only way of starting a war was to kill someone, and we wanted to start a war, so we intended to kill some of the police whom we looked upon as the foremost and most important branch of the enemy forces … The only regret that we had following the ambush was that there were only two policemen in it, instead of the six we had expected…“

That, of course, is the account of the Soloheadbeg ambush, the very first engagement of the war of independence, when Irishmen murdered other Irishmen in cold blood for the purpose of beginning a war that would take the lives of countless Irishmen on both sides. Dan Breen and his colleagues are viewed as heroes for their actions. The two Irishmen, both from Tipperary, both Irish Catholics, have just spent three days being denounced as great oppressors and villains. For being in the wrong place, at the wrong time, escorting explosives to a quarry, and meeting Mr. Breen, who wanted to kill them to start a war.

History is undoubtedly complicated. There is a persuasive case to be made that the war was necessary, and it is so widely believed that there is no need whatever to re-make it here. But all wars, however justly fought, have innocent victims and good people on the losing side. It’s been said, of late, that nobody commemorates the Nazis. But what of the people of Dresden, 25,000 of whom where killed by fire in a British incendiary bombing raid in 1945, well after the point when the war was functionally won? To say that we do not commemorate the enemy dead is just, well, plain wrong:

A British charity, the Dresden Trust, was formed in 1993 to raise funds in response to the call for help, raising £600,000 from 2,000 people and 100 companies and trusts in Britain. One of the gifts they made to the project was an eight-metre high orb and cross made in London by goldsmiths Gant MacDonald, using medieval nails recovered from the ruins of the roof of Coventry Cathedral, and crafted in part by Alan Smith, the son of a pilot who took part in the raid.

The new Frauenkirche was reconstructed over seven years by architects using 3D computer technology to analyse old photographs and every piece of rubble that had been kept and was formally consecrated on 30 October 2005, in a service attended by some 1,800 guests, including Germany’s president, Horst Köhler; previous and current chancellors, Gerhard Schröder and Angela Merkel; and the Duke of Kent.

The problem with all these commemorations that we have planned for the next few years is that every single one of them, regardless of what side is being commemorated, will commemorate those who inflicted terrible pain on innocent Irish families.

Remember this horrific act of British brutality against Irish republicans?

“That night, 6/7 March, nine Republican prisoners who had previously been tortured, with bones broken with hammers, were taken from Ballymullen Barracks in Tralee to Ballyseedy crossroads and tied to a landmine which was detonated, after which the survivors were machine-gunned.”

If you read that ISIS did that, you’d be horrified. But it wasn’t ISIS. And it wasn’t the British, either. It was the Irish Free State – the Government of Michael Collins and Arthur Griffith. Collins himself, of course, was shot in cold blood by a fellow Irishman. A criminal, or a hero?

Either way, is it really so unreasonable to wonder why we’re going to commemorate those who broke the bones of Irish republicans with hammers, and then blew them up with a land mine, but not men who were killed callously to start that very conflict?

Wouldn’t it be better, all things considered, simply to remember all those who died in those horrific years, whatever “side” they were fighting on, and to concentrate instead on our proclaimation of independence, which states, beautifully:

“In this supreme hour the Irish nation must, by its valour and discipline, and by the readiness of its children to sacrifice themselves for the common good, prove itself worthy of the august destiny to which it is called.”

Let’s start by respecting the memories of all who died at the hands of guns, British and Irish ones alike, and resolving never to let that happen again.

Harvard Prof after listening to Donnelly: I feel sorry for Ireland

Woman in Kerry feared to have contracted Coronavirus, currently in isolation