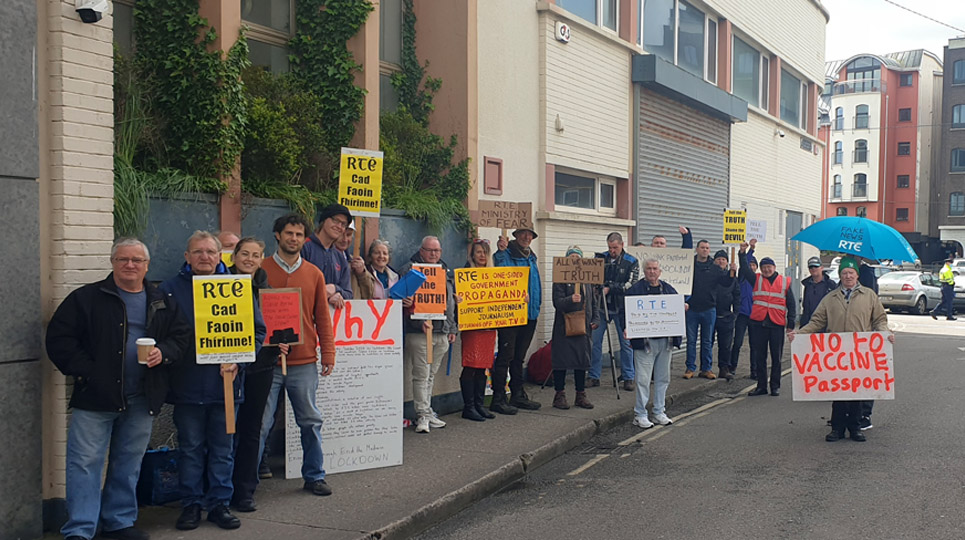 A protest outside the Cork city offices of RTÉ claimed that RTÉ had “betrayed” its duty as a public broadcaster because it engaged in “biased and one-sided reporting” of the Covid19 lockdown.

The event was organised by the Independent Campaign for Truth & Proper Healthcare which held several anti-lockdown demonstrations in Cork previously.

Speaking for the group, Diarmaid Ó Cadhla said that RTÉ reporting of “deaths and of illness spreading throughout our country, causing people to be genuinely frightened”. He said the reports had led people to believe that death rates were extremely high, when CSO figures showed that excess deaths were not significantly changed in 2020.

He said the protest wanted to  “challenge RTÉ and the other media outlets to organise proper public debate” saying that doctors and legal experts who disagreed with the government’s policy on Covid restrictions had “been silenced”.

“Bring on those doctors and legal experts and bring on the Government experts and let’s have them all debate the issue,” he said. “RTÉ, will you do that? In Cork, we ask RedFM and 96FM, will you organise such a balanced debate?”

He said the media should not be “a propaganda tool for Government and for the vested interests that Government answers to.”

“All this so-called pandemic has given us is worse public healthcare, an increasingly dictatorial Government and huge additional public debt. No doubt, schemes are being thought-up as we speak, huge economic cut-backs are on the way, these will weigh heaviest on the working people, we must not accept this imposition,” he said.

The government has insisted it has followed best international advice on dealing with the Covid virus.

Woman in Kerry feared to have contracted Coronavirus, currently in isolation