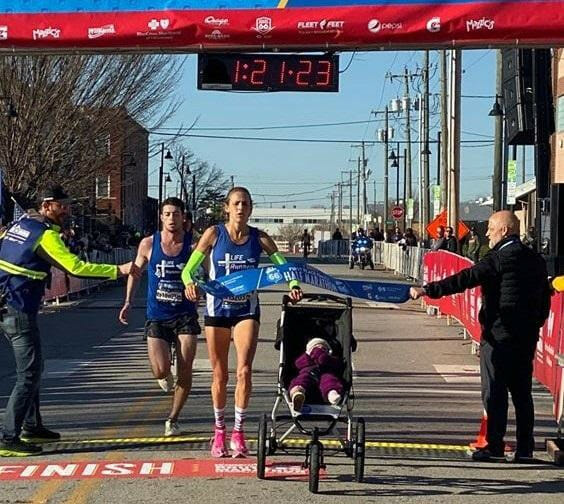 Women who love to run don’t want to give it up after they have a baby. So they’ve started competing in races pushing strollers.

Now one of those sporty mums has set a new world record for the fastest half-marathon while pushing her baby daughter in a stroller – and wearing a pro-life message.

Julia Webb won the Route 66 women’s half marathon in Tulsa, Oklahoma last week , setting a new world record while she pushed her 10-month-old daughter, Gabriella, in a stroller.

Already an accomplished athlete she finished the race at 1:21:24, according to race organizers, and her t-shirt proclaimed the message “remember the unborn”.

LifeSiteNews reports that both Julia and her husband Alan Webb are members of with LIFE Runners, the largest pro-life running group in the world, with over 13,000 runners in 39 countries all over the world who raise money and draw attention to the pro-life cause.

“They were a big reason I was able to break the record this season,” she told the pro-life site.

Julia is currently preparing to run marathon trials this February in Atlanta in order to qualify for the next Olympic Games. LIFE Runner and husband Alan is an athlete,too, and famed for having set the unbeaten American record in the mile (3:46.91). Both Julia and Alan are devout Catholics.

For most of my life I never wanted to stand up for anything. I wanted to be agreeable with everyone and everything, offending as little people as possible … I just wanted to be accepted and having approval feels good. Respect to all beliefs but I feel called to be a witness to Christ.

There are days I am dragging and want to hide behind a Nike logo but it’s time for me to be uncomfortable. Standing up for the littlest in society matters. Anyone else brave enough to join?