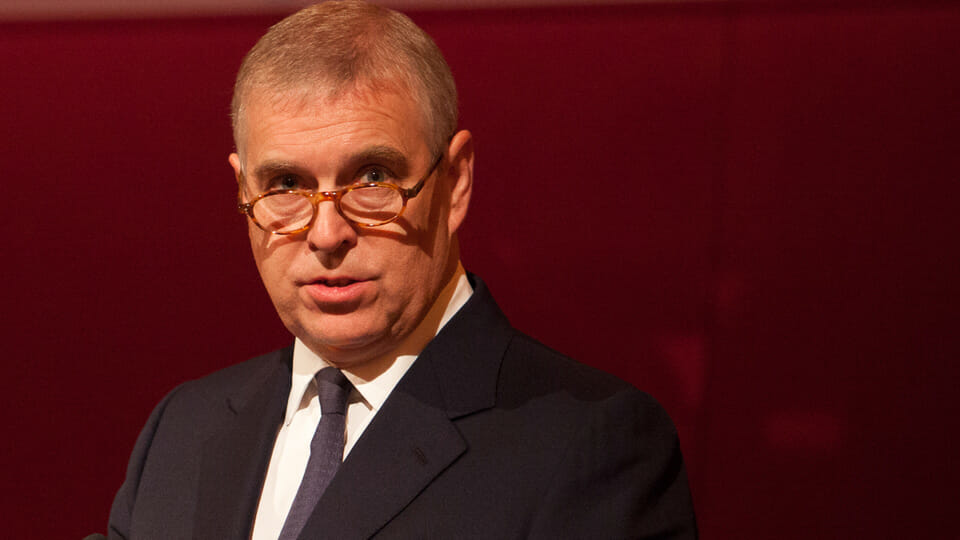 The Duke of York’s very public trial regarding allegations connected to the late Jeffrey Epstein is not only a major embarrassment for his family, and supporters of the monarchy generally, but exposes a disturbing nexus between the very powerful and the sexual exploitation of underage girls and boys.

Epstein apparently committed suicide in August before he could stand trial on US federal charges of sex trafficking minors. A convenient side effect of that decision to take his own life is that his demise in custody may have saved some prominent people, including former President Bill Clinton, from revelations regarding their relationship with Epstein. Prince Andrew is one of those powerful people who were close to Epstein.

Epstein was a vastly wealthy man, the exact origin of whose wealth remains somewhat of a mystery. He seems to have inhabited a sinister demi monde like V.M Varga in Fargo. A world of subterranean financial deals and manipulation underpinned by degenerate impulses, as though being vastly rich is not sufficient in itself to sate the appetites of those who have access to whatever they want.

Andrew’s connection to Epstein is undeniable although he claims that it had nothing to do with the illegal and immoral services Epstein provided for his friends and clients. The testimony and evidence of one those allegedly exploited by Epstein, Virginia Guiffre, as seen in the Spotlight interview appears damning.

It is not the first time of course that a British royal has been implicated in sexual scandal. Andrew’s uncle Louis Mountbatten is now generally accepted to have been someone who had sex with underage boys. Those who dispute this must contend with the fact that his FBI file, which had no conceivable reason to invent such a thing, reported of its own intelligence from an associate of Mountbatten:

She states that in these circles Lord Louis Mountbatten and his wife are considered persons of extremely low morals.

“She stated that Lord Louis Mountbatten was known to be a homosexual with a perversion for young boys.

“In Lady Decies’ opinion he is an unfit man to direct any sort of military operations because of this condition. She stated further that his wife Lady Mountbatten was considered equally erratic.’

The interview was signed “EE Conroy”, head of the New York field office, who wrote that she “appears to have no special motive in making the above statements”

There are also claims that he was one of those who used the boys provided through the Kincora Boys home in Belfast in the 1970s. Andrew Lownie’s book The Mountbattens: Their Lives and Loves contains the testimony of boys from Kincora who were abused at Mountbatten’s Sligo holiday home.

(Curiously one of Mountbatten’s defenders was Pat Corcoran of the now-defunct platform Indymedia and Antifa who claimed that linking Mountbatten to paedophilia was homophobic. Corcoran himself was since convicted of possessing 7000 images of child pornography yet received only a suspended sentence from the court.)

British intelligence apparently not only knew of the Kincora paedophile ring, but allowed it to continue as a means of compromising those who used it, who it is alleged included leading unionists and others in powerful positions. One of those involved was John McKeague, the founder of the Red Hand Commando who was conveniently shot dead by the INLA shortly after being questioned by the RUC about Kincora and apparently having confided in his friends that he was prepared to provide names. In their history of the INLA, Deadly Divisions, Jack Holland and Henry McDonald claimed that both assassins were state agents.

Compromising a person sexually is possibly the oldest and most effective means to blackmail someone into betrayal to avoid exposure. The IRA was not immune and there is an array of instances where it is suspected that police or intelligence services knowledge of rape, particularly of children, was used to turn key people.

It defies belief that RUC Special Branch knew of the despicable behaviour of Liam Adams, for example without having attempted to use that to their own ends – an objective that was facilitated by the protection extended to him from within the IRA.

Royal degeneracy and the penchant of British spooks and their Irish agents for deviancy was briefly the focus of attention in the late 19th century. The last Duke of Clarence, Albert Victor, son of Queen Victoria, was one of those alleged to have patronised a brothel in Cleveland Street, London which employed young teenage male prostitutes. Several people were charged but there is evidence that there was interference with both the police investigation and the trial to protect prominent people, including, some believed, the Duke.

The Irish connection was supplied by one of the prostitutes, ‘Dublin’ Jack Saul who gave evidence in 1890 in the defence of a radical London journalist Ernest Parke who lost a libel action taken by the Earl of Euston and was sentenced to 12 months hard labour. Saul had also been involved in a male prostitution case centred on Dublin Castle which was exposed by William O’Brien the Irish Party MP in 1883.

O’Brien had accused among others RIC Inspector James French of the CID of having used his position to force young cadets to have sex with him and others. A libel case taken against O’Brien and United Ireland by the Secretary of the Irish Post Office Gustavus Cornwall uncovered a subterranean gay scene in Dublin. While some of it undoubtedly involved consenting adults, there was a seamier side of brothels employing young teenage boys which involved not just French but other members of the British military and intelligence establishment based in Dublin Castle.

Why that is of particular note is that all of this was taking place alongside an intensified repression of the nationalist movement that had culminated in 1883 with the trials and executions of the Invincibles and went on to see Parnell placed on virtual trial before the Parnell Commission in 1887. Cases like that of Joseph Poole of the Dublin IRB involved the torture and bribery of witnesses to turn state’s evidence, and in the case of the Invincibles the turning of leading members of the organisation like James Carey.

French had been at the centre of all this, as was Inspector John Mallon of the Dublin Metropolitan ‘G’ Division, an execrable character who along with the vastly corrupt Crown Solicitor George Bolton, was at the heart of a secret police and corrupt judicial and penal system that was deployed even against constitutional nationalists.

While some historians have cited the ‘Dublin scandals’ as evidence of homophobia, the real point was that men with power were using that power to exploit young people for sex they presumably would not agree to voluntarily. Indeed it is implied that French was coercing RIC cadets into sex, and the Cleveland Street brothel and others in Victorian London and Dublin were based on force.

Dublin Jack, who had lived on Duke Lane and been a prostitute in Dublin from the age of 13 or 14 was taken by Mallon to Dublin to give evidence but was never called. Just as with the Dublin Castle and Cleveland Street cases, the current revelations in the Epstein case about young girls being trafficked exposes the deeply evil use of money and power to prey on children, and the involvement of so many of the supposedly great and the good. If the Duke of York’s connection is proven it will have potentially calamitous impact on the British monarchy.

But of course: RTE to get another huge wedge of cash from taxpayers