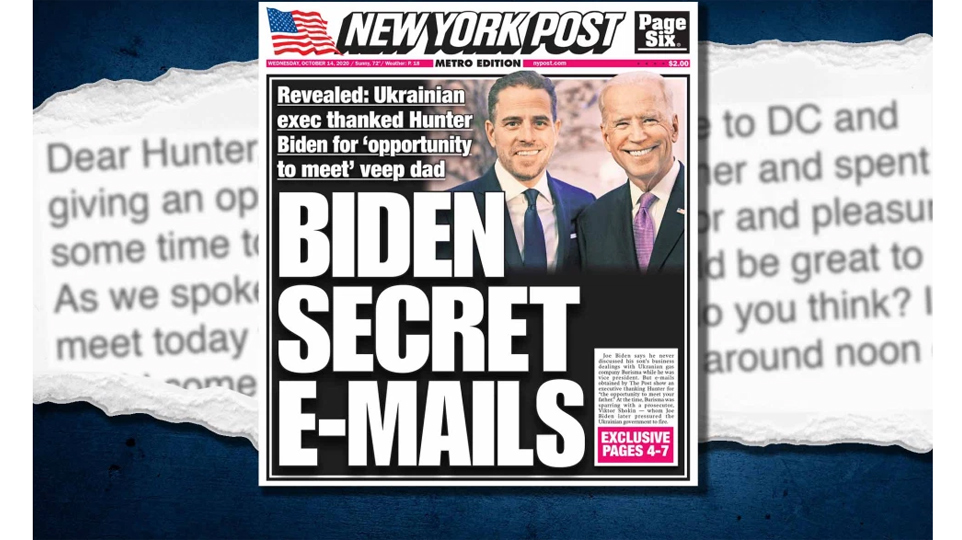 The New York Post is the third largest domestic newspaper in the United States by circulation. It’s a tabloid, founded in 1801, and could best be described as sort of an American equivalent to The Sun. A tabloid, but a real newspaper – not comedy publication like, say, the National Enquirer.

Yesterday it ran a news story concerning the US Presidential election, in which it reported that it had uncovered emails between a Ukranian businessman and the son of Democratic Candidate Joe Biden, which seemed to suggest that the latter had set up meetings between the Ukranians and Biden himself, while Biden was Vice President under Barack Obama. It further reported that it had obtained footage of the younger Biden smoking crack cocaine while engaged in a sex act with an unknown woman.

Here’s the main part of the story:

The never-before-revealed meeting is mentioned in a message of appreciation that Vadym Pozharskyi, an adviser to the board of Burisma, allegedly sent Hunter Biden on April 17, 2015, about a year after Hunter joined the Burisma board at a reported salary of up to $50,000 a month.

“Dear Hunter, thank you for inviting me to DC and giving an opportunity to meet your father and spent [sic] some time together. It’s realty [sic] an honor and pleasure,” the email reads.

An earlier email from May 2014 also shows Pozharskyi, reportedly Burisma’s No. 3 exec, asking Hunter for “advice on how you could use your influence” on the company’s behalf…..

….. The computer was dropped off at a repair shop in Biden’s home state of Delaware in April 2019, according to the store’s owner.

Other material extracted from the computer includes a raunchy, 12-minute video that appears to show Hunter, who’s admitted struggling with addiction problems, smoking crack while engaged in a sex act with an unidentified woman, as well as numerous other sexually explicit images.

Vice President Biden issued a denial, saying that the alleged meeting had never taken place. However, the veracity of the email in question, and the images of Biden’s son, have not been disputed.

Facebook and Twitter took steps on Wednesday to limit the spread of a controversial New York Post article critical of Joe Biden, sparking outrage among conservatives and stoking debate over how social media platforms should tackle misinformation ahead of the US election.

In an unprecedented step against a major news publication, Twitter blocked users from posting links to the Post story or photos from the unconfirmed report. Users attempting to share the story were shown a notice saying: “We can’t complete this request because this link has been identified by Twitter or our partners as being potentially harmful.” Users clicking or retweeting a link already posted to Twitter are shown a warning the “link may be unsafe”.

“Sparking outrage among conservatives”, notes the Guardian there, apparently conceding that conservatives are the only people on earth who seem to be remotely bothered that two enormous, privately owned, unaccountable tech companies now have the power to effectively gag newspapers who report news that they do not like.

And twitter did not just stop at restricting the story. They also moved to freeze the accounts of senior people who shared it, up to, and including, the White House Press Secretary:

Twitter’s official reason for these actions has to be seen to be believed:

As noted this morning, we also currently view materials included in the articles as violations of our Hacked Materials Policy.https://t.co/gCY4BnBHHa

A violation of a policy against sharing “hacked materials” and “personal and private information”? That amounts to a ban on journalism, in essence. After all, just two or three weeks ago (feels longer, doesn’t it?) the New York Times shared documents purporting to be President Trump’s tax returns. If genuine, those documents could only have been obtained illegally – it’s an American federal crime to share someone else’s tax returns. They are also personal, and private information.

A sceptic might come to the conclusion that Twitter decided to shut up the New York Post first, and find a flimsy reason for doing so later.

Even if the social media giant does have a policy against sharing hacked materials, that policy is going to be abandoned at the first moment it becomes inconvenient for liberal newspapers. The Panama Papers story, for example, could hardly have been published under that policy, could it?

No, this is all nonsense: What’s happened here is fairly obvious to anybody with a brain: Twitter and Facebook executives spotted a story in a newspaper that did not align with their political preferences ahead of a major election, and decided to use their power to keep people from sharing, or seeing, that story. And then, when criticised for that decision, they decided to retroactively come up with an excuse that makes no sense.

Social Media companies should not have this kind of power. They are unaccountable – we cannot vote them into, or out, of office. They answer only to their shareholders. They have no meaningful competition. They should not become political actors.

The idea of big business influencing politics used to be anathema to the left. But since these companies are now largely favouring the left’s candidates, that particular principle has been conveniently set to one side.