O’Riordan: Boys in all-boys schools grow up to beat women 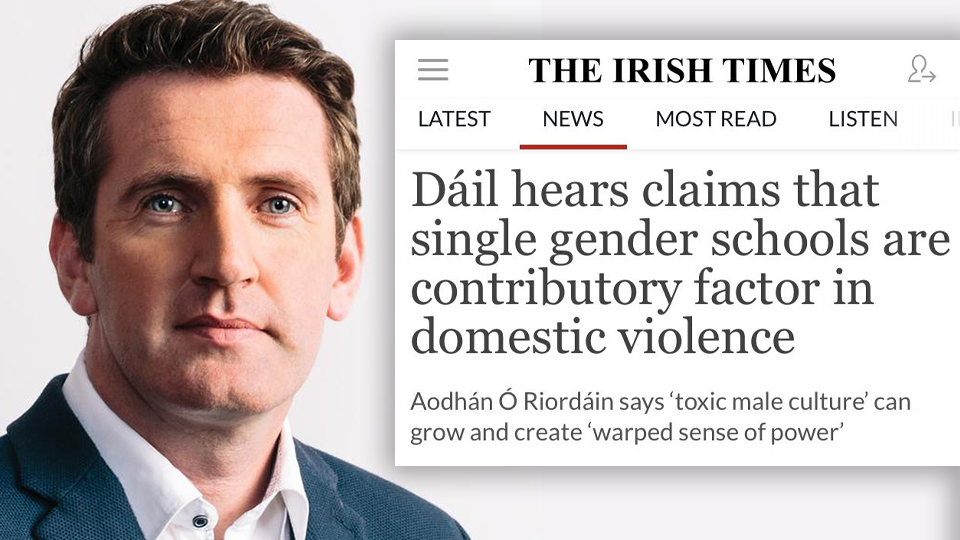 Just when you think the woke Irish establishment has reached its lowest point, someone like Labour’s Aodhán O’Riordan always comes out of nowhere to prove you wrong.

Their newest target? Teenage boys at school – a.k.a the most dangerous demographic in all of society. As reported in the Irish Times yesterday:

“Single gender schools are a contributory factor in the “toxic male culture” that leads to domestic violence, Labour’s education and enterprise spokesman has claimed.

Aodhán Ó Riordáin said he was not attempting to be provocative or destructive but they had to drill down into the root causes of toxic masculinity and why domestic violence appears to be getting worse in Ireland.

There can be a toxic masculinity that grows up in a single gender male school and can create a “warped sense of power”, he said.”

“Within that can come a situation where power and dominance is sought,” he added.
…
“Nobody can convince me that that isn’t part of the problem,” the Dublin Bay North TD said, pointing to significant numbers of young women born since 2000 who are experiencing violence.”

Not one shred of actual evidence or scientific data is provided to back up this outrageous claim, mind you. The closest we got was Aodhán claiming that Ireland has a disproportionate amount of single sex schools compared to our European neighbours – a fact which is both true, and proves absolutely nothing. Correlation does not equal causation, as most people with a Leaving Cert education would understand. He may as well say “We have more red-haired people in Ireland, QED there is more domestic violence.” There’s not even an attempt to link the stats or show how they relate to one another – we’re apparently just supposed to take it at face value.

But on top of the lack of evidence provided, think about what Aodhán and Labour are actually saying here.

Fundamentally, the subtext is that the reason evil men beat women is because they spent too much time with the lads as a boy, and had too many male friends at school. Apparently, according to Labour, when you get a load of young boys in a room, they start power tripping about how fun it would be to beat women, and before you know it, their Orc-like male bloodlust has spiralled out of control until they gain a “warped sense of power” and act on it.

Does this sound reasonable to anyone? Is that reflective of any young boys you know in your life? I mean, first of all, this is assuming that lads who go to all-boys schools don’t have mothers, sisters, aunties, female cousins, neighbours, or even just female friends and girlfriends from outside of school. The assumption seems to be that when you go to an all-boy’s school you become a monk in a monastery who is totally detached from the female species and can’t relate to them on any level. In other words, it’s bollocks.

But as a young man myself, allow me to demystify this issue for Aodhán.

Things teenage boys DO talk about amongst each other:
– Memes
– Sports
– Sex, and how fit “yer wan” is
– How the upcoming exams are manky and “I’m going to fail because I barely studied lol”
– How their maths teacher is cringe
– What they thought of the new trailer for Grand Theft Auto 6
– How Post Malone’s second album wasn’t as good as his first

Things teenage boys DO NOT discuss:
– How violence against women is OK

I’m not sure what conversations Aodhán was privy to in his youth, but I think it’s fair to say most people do not at all relate to this cartoonishly villainous picture he paints of the male sex.

Secondly, and perhaps more importantly, why single out boys and so-called “toxic masculinity”? Does going to a girls’ school cause “toxic femininity”, or is it only the male half of the population that has a problem here?

After all, it may or may not come as a shock to you that according to the National Office for the Prevention of Domestic, Sexual and Gender-based Violence, around 30% of people who have been seriously abused by a partner in Ireland are male. Why is Labour acting like the only people who beat their partners are men?

In fact, this is also to assume that just because a woman is abused, the perpetrator automatically must be a male. We know that there are some egregious and serious cases of female on female domestic violence in lesbian relationships, but apparently to Labour it’s only a problem when the perpetrator has a penis.

If you want to talk to someone we're here for you:

So do teenage girls need to be lectured on this and treated as potential abusers from a young age, or is it only young boys we’re deciding to demonize today?

Well, of course it’s the latter. Despite young Irish males having one of the worst suicide rates in Europe (8 in 10 suicides in Ireland are men), and falling behind girls academically for the better part of a decade, all politicians like Aodhán Ó’Riordan can apparently think of to do is alienate them further by implying there’s something defective about being male or that spending too much time with your male friends will make you grow up to be a wife-beating psychopath. The last thing depressed young boys need is national politicians implying they’re dangerous in groups, and maybe Aodhán should have considered that before saying something for which there is no evidence.

But O’Riordan is apparently not the only person in Irish politics who feels this way. Fine Gael Minister for Justice Helen McEntee has been talking about having “consent classes” at schools in recent months in an effort to prevent sex crime.

As the Irish Examiner wrote:

“A range of initiatives will also be taken to educate people around the meaning of consent including a major awareness campaign and a number of actions within primary, secondary- and third-level education.”

Yes, you read that correctly. Consent classes in primary school, as if most 10 year olds are violent rapists waiting to happen. Every male, from the age of 8 to 80, is apparently suspect.

If you needed any more proof that radical feminism is embedded deep within our political system, look no further than stories like this.