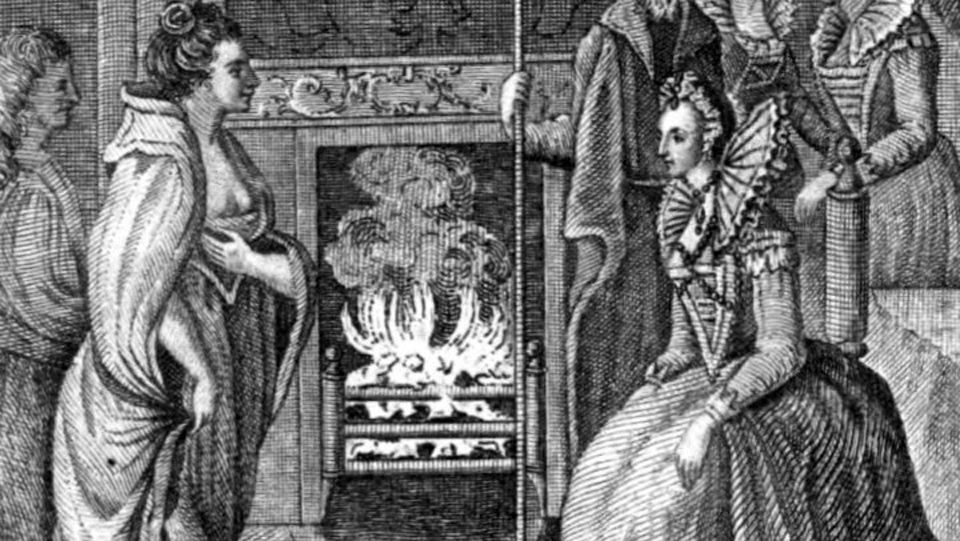 Grace O’Malley (Gráinne Ní Mháille) demanded the release of her son, who had been imprisoned by Richard Bingham, Governor of Connacht. Elizabeth agreed, and Bingham was recalled to England.

Grace was born in 1530 into the Ó Máille dynasty in the west of Ireland; the daughter of Eoghan Dubhdara Ó Máille. She is well-known historical figure in 16th-century Irish history. Ní Mháille is not mentioned in the Irish annals, so documentary evidence for her life comes mostly from English sources, especially the eighteen “Articles of Interrogatory”, questions put to her in writing on behalf of Elizabeth I.

Ní Mháille was married in 1546 to Dónal an Chogaidh Ó Flaithbheartaigh, tánaiste or heir to the Ó Flaithbheartaigh (O’Flaherty), they had 3 children. When he was killed in battle, she married, Risdeárd an Iarainn (“Iron Richard”) Bourke, and Tiobóid a Búr was a child of that marriage.

In the late 16th century, English power steadily grew in Ireland and Ní Mháille’s power was steadily encroached upon. In 1593, when her two sons Tibbot Burke and Murrough O’Flaherty, and her half-brother Dónal na Píopa were captured by the English governor of Connacht, Sir Richard Bingham, Ní Mháille sailed to England to petition Queen Elizabeth I for their release.

The women came to an agreement that included that Elizabeth would remove Bingham from his position in Ireland, and Ní Mháille would stop supporting the Irish lords’ rebellions.

The price we Irish paid for this was Ní Mháille siding with the English. Most notably at the pivotal and historic Battle of Kinsale. The Irish loss of this battle condemned Ulster to plantation and the native Irish there to hundreds of years of enslavement through penal laws.

Grace died in Rockfleet Castle in 1603. Her son, Tiobóid a Búr, realized that times were changing. He took the side of the English in the Battle of Kinsale in 1601, where the Irish were finally defeated. For this he was made a knight and given title to extensive lands.

ON THIS DAY: 26 JULY 1914: Volunteers meet the Asgard for delivery of guns