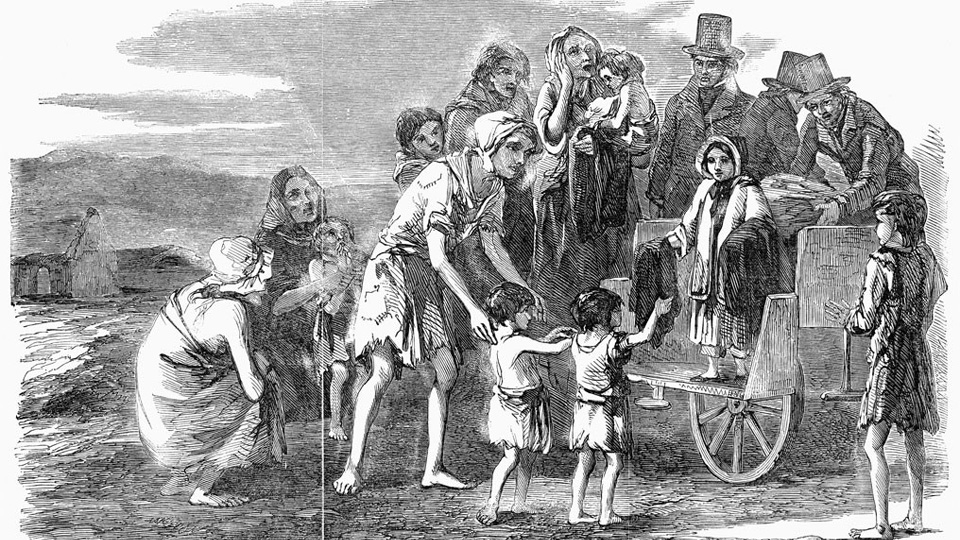 ON THIS DAY: 3 NOVEMBER 1845: Irish Delegation visited LORD Heytesbury to act immediately and stop the export of food from Ireland because millions were starving. He declined.

On that date, a delegation of concerned and alarmed Irishmen including Daniel O’Connell, Mayor O’Sullivan of Dublin and twenty others visited Britain’s Viceroy in Ireland, Lord Heytesbury. The same blight that had destroyed the English potato crop and also destroyed the continental crop for the second year running, had also destroyed the Irish crop. Ireland was in a very precarious situation. Due to the confiscation of lands and plantations during the previous 250 years, the bulk of Ireland’s population was poverty stricken tenant farmers for absentee landlords, living hand to mouth, day by day. They had tiny holdings where they could not rotate their crops. They were totally dependent on the potato.

The delegation pleaded with Heytesbury to head off the catastrophe by following the example of Belgium and Portugal, which had closed their ports to food exports and also to order a temporary cessation of distilling and brewing in order to leave more grain available for people to consume.

Heytesbury read them a statement that referred only to potatoes and questioned the extent of the crop loss and then “bowed them out.” He and others claimed later that they ‘did not know’ but written accounts and reports by their own country men and others in their elite circle made the situation of Ireland known to the authorities again and again.

The famine of 1845 – 1847 was not the first famine, there were several previous to that; so the issue was not new to the authorities. Since the Act of Union in 1801, Ireland was ruled by the Lord Lieutenant and Chief Secretary for Ireland, both appointed by the British government. Ireland sent 105 MPs to the House of Commons and between 1832 and 1859 – the years of famines – 70% of the ‘Irish’ MPs were landowners or sons of landowners.

In 1843, the British government established the Royal Commission regarding the laws on the occupation of land. Daniel O’Connell described this commission as “perfectly one-sided” composed solely of landlords with no tenant representation.

The rents from Ireland were spent elsewhere, in European cities on high living,. Historian Cecil Woodham-Smith wrote that an estimated £6,000,000 left Ireland in 1842 alone. The country was being bled dry with no thought for its citizens in the slightest ; it was a cash cow for the British elite.

“a starving population, an absentee aristocracy, an alien established Protestant church and the weakest executive in the world.”

British MP, William Cobbett toured Ireland’s southern counties from 15 September to 28 November 1834. He recognised what he saw as he was growing crops on his farm in Surrey; paying wages to his farm labourers and then rent to his landlord, much like the Irish farmers, except his holding was much larger and his per acre rent payments were a fraction of what was being extracted from the Irish. He had promised to publish a book of the speeches he gave and the letters he wrote regarding Ireland; sadly he died within a few months of returning home to England. Finally in 1984, a Dennis Knight published those letters in a book titled Cobbett in Ireland: A warming to England.

Cobbett was widely respected; known as courageous man who spoke truth and sought justice. For an Englishman to seek justice for Ireland was a courageous thing to do, he pointed out that the Irish tenant farmers were being starved to death, that there was an abundance of food in the country that left under armed guard. His letters had informed British officials of the effects of their policies so they cannot claim to be uninformed. He saw that Irish food and labour was instrumental in keeping the populations of England and her colonies well fed.

“I have been for part of my life, for 8 years, in the colony of North America. I saw that colony settled after the rebel war (US revolution). I saw there in an English regiment myself; I saw the colony increase very fast, I saw the whole of the people for four years. I saw 260,000 people who would have expired of hunger were it not for the bread, meat, butter that came out of this island (Ireland). Two hundred and sixty thousand were fed by this country. Not a soul of those 260,000 but were living better than those by whom the food was sent!”

“Every country town in England has at this moment a supply of Irish flour, Irish meat and Irish butter. “I repeat what I said in my place in parliament and I say that it is impossible for any reasoning man to believe that eight million people will continue feeding another nation of ten to twelve million of people. It is not possible to believe that there will be for a long time peace by or tranquility amongst the eight million held as a colony by the ten or twelve million.”

He continued in another letter:

“The hogs are to be killed and dried or rubed and sent out of this country to be sold for money to be paid to the landlords who it in London, Bath, Paris, Roe or some other place of pleasure, while these poor creatures are raising all this from the land are themselves starving.”

Beaumont added the notes from his first tour to writings from a second tour of 1837 in a publication Irlande: Sociale, Politique et Religieuse. In it he wrote:

“The proprietor, as we have said, is often an absentee, an Englishman living in England, it often happens that he is unacquainted with his own estates, he knows vaguely that he possesses some hundred or hundred and fifty thousand acres in the county of Cork or Donegal, that is bounded on one side by the sea and on the other side by the loftiest mountains perceptible in the horizon. Desirous of deriving from these possessions the greatest profit possible, he is also resolved to not spend a single farthing in improving their value. He or his ancestors obtained this vast tract by confiscation.”

He wrote about the discrimination faced and experienced by peasant Catholics who had to pay for the upkeep of protestant clergymen and judiciary.  Beaumount wrote again:

“Here, oppression is allied to insolence. On the occasion of the recent death of an Anglican prelate, it was calculated that in the course of his long ecclesiastical career that lasted 65 years, he received for his various duties about 19,000,000 francs. All this was paid out by a Catholic country and by a poor population!”  Ireland, Social Political and Religious by published in 1839 and supplemented in 1869.

He added the exclamation mark.

Tocqueville called England a second native land, he had so much admiration for the English and England; even he had to admit in his writings of the situation in Ireland.

“At the present, the land is divided between a small number of owners. The whole Irish population, so to say, consists of very small and very poor tenant farmers, and labourers, even poorer than they. Q. So nobody cultivates a field which is his own? No.”

“The agricultural yields are immense. There is no country where the price of farms is higher. But none of this money remains in the hands of the people. The Irish cultivates beautiful crops and taks his harvest to the nearest port and puts it on an English ship; then he goes home and eats potatoes. He rears cattle, sends them to London and never eats meat.

On 24 March 1847, The Times reported that Britain had permitted in Ireland

“a mass of poverty, disaffection, and degradation without a parallel in the world. It allowed proprietors to suck the very life-blood of that wretched race”.

With the food shortages having no end in sight, tenants were unable to pay their rents and landlords drove people off their tiny holdings, their last place of refuge.

In 1847, Bishop of Meath, Thomas Nulty, described his personal recollection of the evictions in a pastoral letter to his clergy:

“Seven hundred human beings were driven from their homes in one day and set adrift on the world, to gratify the caprice of one who, before God and man, probably deserved less consideration than the last and least of them … The horrid scenes I then witnessed, I must remember all my life long. The wailing of women—the screams, the terror, the consternation of children—the speechless agony of honest industrious men—wrung tears of grief from all who saw them. I saw officers and men of a large police force, who were obliged to attend on the occasion, cry like children at beholding the cruel sufferings of the very people whom they would be obliged to butcher had they offered the least resistance. The landed proprietors in a circle all around—and for many miles in every direction—warned their tenantry, with threats of their direct vengeance, against the humanity of extending to any of them the hospitality of a single night’s shelter … and in little more than three years, nearly a fourth of them lay quietly in their graves.” 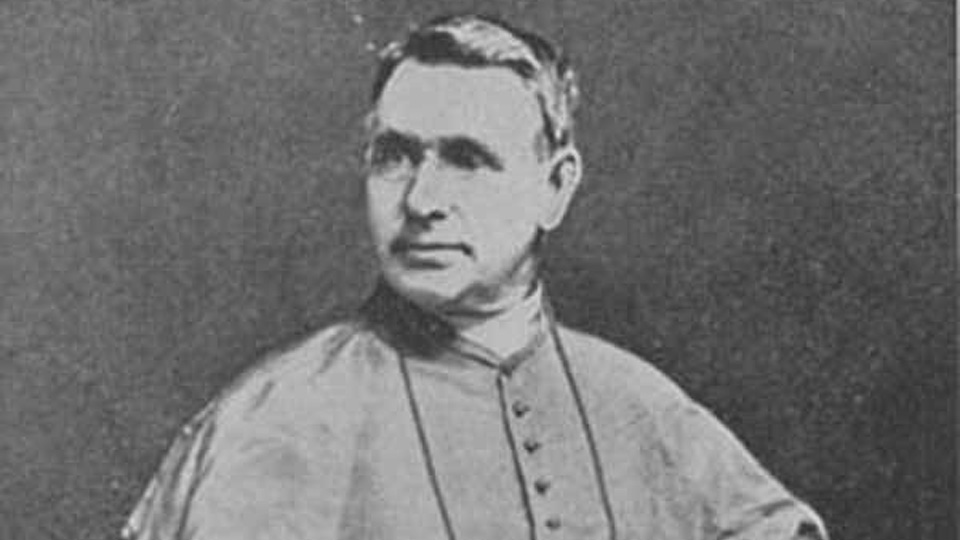 Other critics maintained that, even after the government recognised the scope of the crisis, it failed to take sufficient steps to address it. John Mitchel, one of the leaders of the Young Ireland Movement, wrote in 1860:

“I have called it an artificial famine: that is to say, it was a famine which desolated a rich and fertile island that produced every year abundance and superabundance to sustain all her people and many more. The English, indeed, call the famine a “dispensation of Providence”; and ascribe it entirely to the blight on potatoes. But potatoes failed in like manner all over Europe; yet there was no famine save in Ireland. The British account of the matter, then, is first, a fraud; second, a blasphemy. The Almighty, indeed, sent the potato blight, but the English created the famine.” 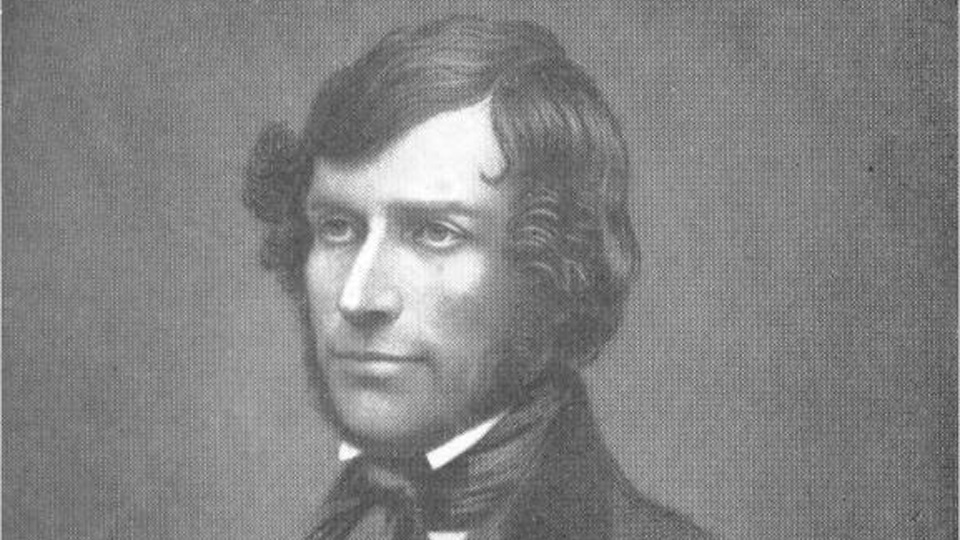 According to the Oxford English dictionary, which is considered the most prestigious dictionary in the English language, the word famine is described as “a lack of food during a long period of time in a region”. What happened in Ireland cannot be described as that; there was plenty of food leaving our ports before, during and after the famine. High quality, the best of food.

This particular starvation had long term consequences for the Irish nation, it changed the country’s demographics beyond repair, millions were forced to emigrated or died from starvation. Commentators say it was the final blow to a population already suffering under crippling cruelty and discriminatory laws and practices of a colonial power.