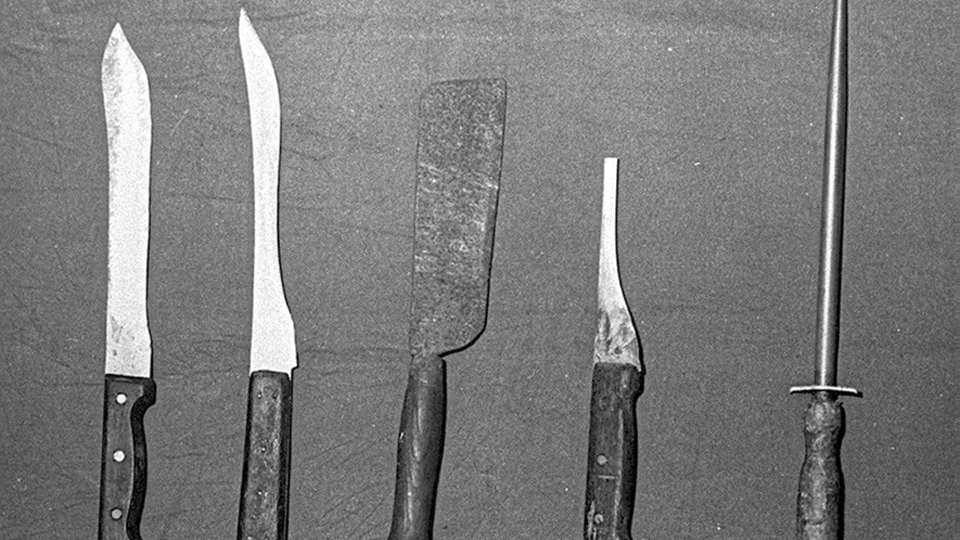 Photo: A sample of the knives they used to torture and slit the throats of their victims

The Shankill Butchers were a group of 11 loyalists, many of whom were members of the Ulster Volunteer Force, which operated out of drinking dens in the Shankill Road area of Belfast hence the name.

They abducted Catholics; tortured, maimed and mutilated their bodies before eventually killing them with butchers knives, axes and hatchets. Their victims bodies were so badly damaged that their funerals were often in a closed coffin. They cut off their victims private parts and stuck them in their mouths and stuck rosary beads in their eye sockets.

The gang also killed six Protestants over personal disputes, and two other Protestants mistaken for Catholics.

They begun their killing spree in July 1972 and were not arrested until May 1977; their reputation terrified ordinary Catholics and their families. The roamed Catholic areas looking for vulnerable Catholics out working late at night or taxi drivers. One such victim, Francis Crossen (34), a Catholic man and father of two, was walking towards the city centre at approximately 12:40am when four of the Butchers, abducted him, he was subjected to a horrific torturous death. A relative of Crossen said that his family was unable to have an open coffin at his wake because the body was so badly mutilated. The accounts of the deaths of all of their victims are harrowing and shocking.

On the 20th February 1979, they were sentenced to life imprisonment for 112 offences including 19 murders. The 11 men were given 42 life sentences and received 2,000 years imprisonment, in total, in the form of concurrent sentences. The judge who oversaw the 1979 trial described their crimes as “a lasting monument to blind sectarian bigotry”

Lenny Murphy, who was the leader of the notorious gang