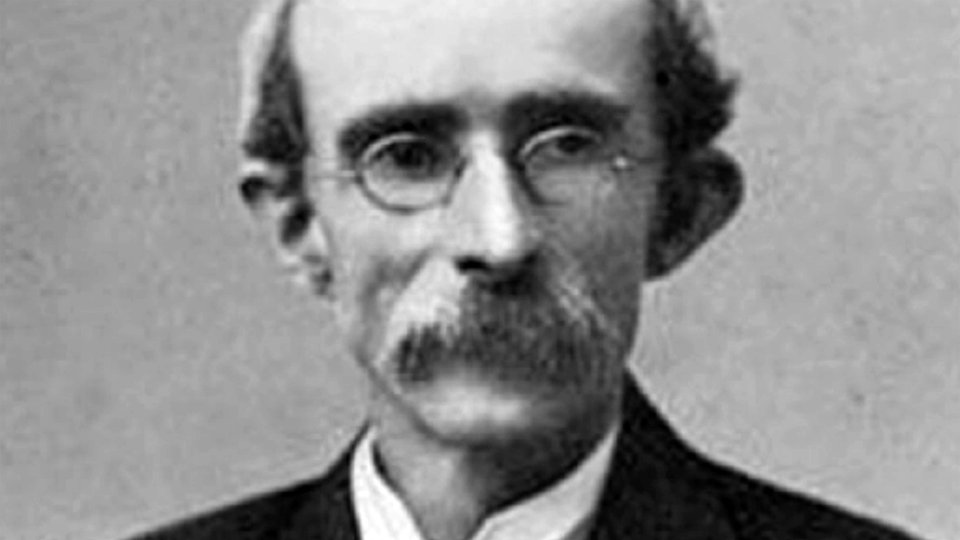 Thomas Clarke was born in Hampshire in the UK to Irish parents. They moved back to Dungannon when Thomas was 7 years old and the family spent the rest of his youth there.

When he was 20, he joined the IRB and quickly rose to prominence, becoming head of the local IRB circle. He was captured after a bombing campaign in the UK and spent the next 15 years doing hard labour in English jails. In prison, he was tortured, along with others, and while some lost their minds from starvation, sleep deprivation and continued harassment, Tom kept his sanity, he copied the bible in shorthand, twice. The starvation was so bad that he chewed rags in his cell in order to survive.

When he was finally released in 1898, in a general amnesty for Fenian prisoners, he moved to the USA and married Kathleen, niece of the Fenian John Daly, who had previously persuaded him to join the IRB. They remained in New York, running a farm, until 1907 and then they returned to Ireland and opened a tobacconist shop. Their most prominent shop was on the corner of O’Connell Street and Parnell Street and became a prime meeting place for every prominent Fenian leader of the coming revolution.

He was instrumental in planning the rising, reforming the IRB and cultivating its young leaders. He founded the IRB’s newspaper Irish Freedom and it became a republican news source for the Irish at home and abroad.

Clarke and Seán Mac Diarmada took control of the IRB and went onto form the Military Committee of same organisation in 1915; they started to plan the Rising, bringing in James Connolly and the Irish Citizen Army in January 1916 and Thomas Mac Donagh before the rising.

It was Clarke who recognised the man that was Pearse and asked him to give the now famous oration at the graveside of fenian Jeremiah O’Donovan Rossa in 1915.

On Easter Monday Clarke’s name was the top signature on the Proclamation and, as a mark of admiration and honour of the men he led, he was the first to march into the GPO to take over the building. At 59-years-old, he took his place at one of the windows at the GPO, he noticed the many young Irish volunteers around him, he said to them : “I have lived to see the greatest hour in Irish history.”

On Friday, with the GPO engulfed in flame, Clarke led his men out across Henry Street and into buildings on Moore Street where the rebels made their last stand.

Following the surrender on 29 April, Clarke was held at Kilmainham Gaol and executed on 3 May. Unlike the other leaders who were executed, Clarke met with Kathleen, the night before his death. According to her autobiography, “Revolutionary Woman,” he told her his trial had been a “farce.” He said, “I suppose you know I am to be shot in the morning. I am glad I am getting a soldier’s death.” Kathleen wrote, “he faced death with a clear and happy conscience.”

He was the only american citizen involved in the 1916 Rising executed by the British, such was the importance the authorities gave him for his part in the Rising.

Subsequently Seán T. O’Kelly, the second President of Ireland, said: ‘If any one man could be said to be responsible for the inspiration of Easter Week, or for the carrying through of the resolution to revolt—credit for that must be given to Tom Clarke. Clarke can truthfully be described as the man, above all others, who made the Easter Rising. He, it was, who inspired it originally, and he, it was, who, in broad outline, laid the plans.’

Tom Clarke outside his tobacco shop in Parnell Street

As reported by L M Reid, Kathleen Clarke had been given the job, before the Rising, of looking after the dependents of the dead and imprisoned men.

Through the Dependents Fund, she also kept the scattered men together once they got out of prison or hospital. Her work was vital in preparing for the Irish War of Independence, which eventually saw Ireland become an Irish Republic.