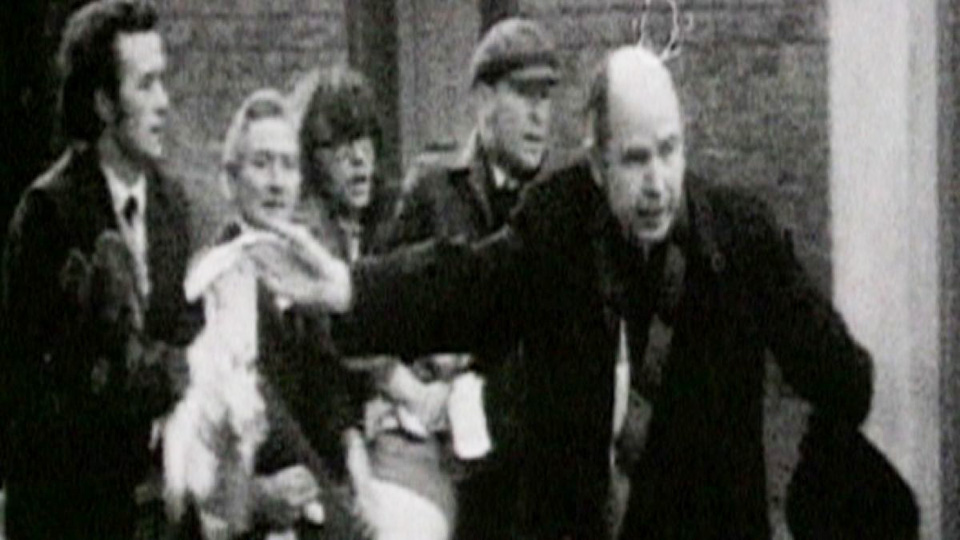 I’m sure it never crossed their minds, but the visit of the Prince of Wales to Stormont to meet his Mam’s two Governor Generals was perceived to have been a tad insensitive by relatives of those killed on Bloody Sunday, the day after the Public Prosecution Service (PPS) announced that there would be no further prosecutions of soldiers who were involved.

The Sinn Féin Deputy First Minister Michelle O’Neill has come in for some criticism for having met the Colonel in Chief of the Parachute Regiment which was responsible for the killings on January 30, 1972.

These are the things you have to do when you are a responsible statesperson, and she did not pull a sickie to avoid meeting him as she had done when Trump’s newly appointed Special Envoy to the north Mick Mulvaney was formally presented in Belfast on Monday.

Only one of the soldiers involved in the murders, Soldier F, has been formally charged but relatives like Kate Nash whose brother William was one of the victims want to see more brought to justice. The relatives now intend to seek a judicial review into the decision of the PPS.

This again highlights the difficulties surrounding so-called “legacy” issues in the north, including killings for which nobody has been charged. A particularly glaring example was highlighted in Seán Murray’s Unquiet Graves which was recently shown on RTE. There is obviously a whole nest of unsavoury links to various branches of the British armed forces and intelligence network in Ireland that has not been officially acknowledged.

In May, the British Government decided that it would not proceed with any further prosecutions of former soldiers which nationalists claim is in contravention of the Stormont House Agreement. That was signed in December 2014 in an unsuccessful attempt to save the Sinn Féin/DUP coalition on the Stormont Executive, but apparently still stands.

While Sinn Féin has been among those making that claim, the Agreement was somewhat vague. It established an Historical Inquiries Unit which under Section 36 would have “”full policing powers” under supervision by the Northern Ireland Policing Board. However, significantly, Section 35 sets out that any decision to prosecute based on the investigations of the HIU rests with the Director of Public Prosecutions.

The commitment to address all of this was very vague in the January 2020 programme for government agreed between Sinn Féin and the DUP. It merely noted the need to “doing everything possible to heal wounds and eliminate the issues that divide us.” Sinn Féin would no doubt argue that there was no need to be more specific because the Stormont House Agreement had set the parameters for dealing with the past.

Obviously it did not, and the worth of anything agreed by the parties in Stormont is surely not much if, as claimed and would appear to be the case, that the British Government can simply make decisions with regard to any possible prosecutions arising from the investigation of cases from the past, without paying any heed to Belfast.
There is also the moral issue regarding the responsibility for actions on all sides in the conflict, whether on the part of the state or republican and loyalist armed organisations. While those who carried out actions leading to deaths were ultimately responsible for what they did, there is also the issue of corporate responsibility.

That is obviously understood when it comes to attributing blame to republican and loyalist groups, but apart from an apology given to the relatives of the Bloody Sunday victims, there has never been any question of officially examining the direct role of those in command of British armed or intelligence units, much less any former Government minister or department for events such as Bloody Sunday with a view to identifying those at the top who gave the orders.

It is understandable that the relatives of people killed on all sides mostly do want closure in the form of legal retribution, or at the very least an attribution of fault. On the other hand there are those who include former IRA and UVF members interviewed as the legacy issues addressed in the Stormont House Agreement were open to consultation; that no old men in their 70s or 80s on any side should be dragged into court.

A former IRA life sentence prisoner, whose brother was shot dead by the army, says no one should go to prison as part of any truth process here. Tommy Quigley believes a jail amnesty is needed to help answer the questions of the conflict period. 25-years after the ceasefires of 1994, Brian Rowan – who was a BBC correspondent at the time – examines that fight for the past.

The South African process seems to have been a success, but it dealt with far fewer deaths in either absolute or relative comparison to the north. Nor did it have to deal so much with the living memories and distrust of communities who still live uneasily beside one another. Perhaps, though, there might be more progress in discovering the truth about the past, including Bloody Sunday, if everyone involved had immunity?

The Green Man’s Burden? NGOs actions are keeping the poor of the developing world authentically impoverished

People are returning to ordinary life, whatever Nphet or the government says