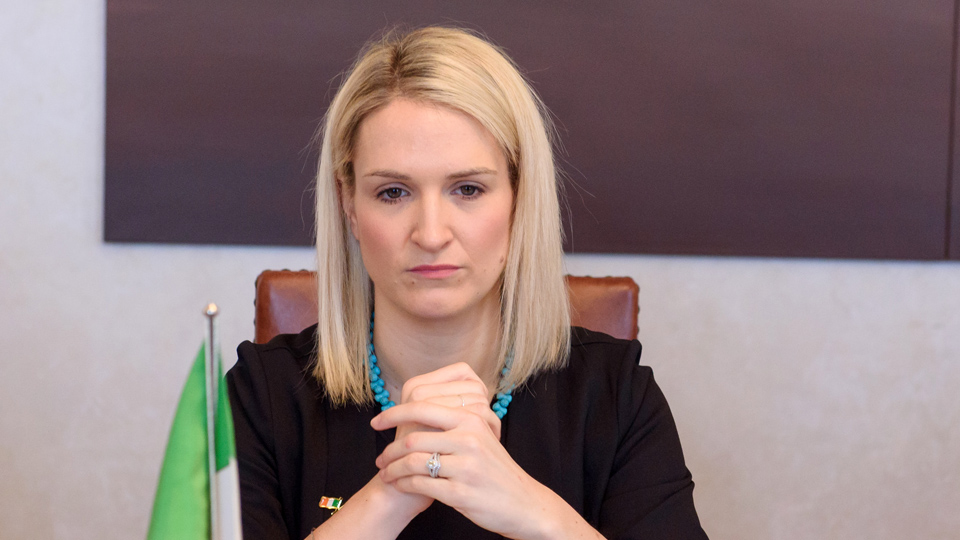 The Department of Justice’s new report, titled ‘Legislating for Hate Speech and Hate Crime in Ireland’, recommends the introduction of draconian and expansive hate based laws in Ireland but contains absolutely no recommendations on how to protect free speech and ensure the laws don’t stifle public debate.

The report, published last week, will be used to formulate the new hate crime and hate speech legislation which Minister for Justice Helen McEntee has pledged to bring to Cabinet before next Easter.

The report argues that hate speech and hate crime laws are now a necessity; that these laws should implemented as soon as possible; that a provision should be brought into law forcing judges to “always consider” if hate is an aggravating factor in sentencing for crimes which “are not specific hate offences”; and that the distribution of hate speech online is a particular problem that the law must forcefully tackle.

The report also recommends that any new legislation on this issue add “gender, gender expression or identity, and disability” to the list of protected characteristics. Sex, as in your biological sex, was considered for inclusion but the Department, in a move that will likely cause concern amongst LGB and feminist groups, decided not to recommend it for inclusion as a protected characteristic.

Amongst the more troubling recommendations in the report is a note that “there should be no requirement for the material to be threatening, abusive or insulting in itself…a broadcast or speech which is clearly designed to incite hatred, but is couched in polite or coded language, would be covered by the new offence.” It is unclear how any law which calls on judges to find hidden meanings in material which would, on the face of it, appear to be perfectly legal can be constructed in such a way that the right to free expression is safeguarded. Someone could be found guilty of a hate crime for saying something which is, on its face, perfectly fine, and then others could be found guilty of recklessly distributing hate material for sharing those statements.

In the same troubling vein, the report says that “it may be useful to provide for a limited number of presumptions in the new legislation…where there is a presumption in law in favour of something, the normal burden of proof is reversed, and the defense must prove this is not the case.” It is obscene for the Department to say it wishes to safeguard free expression in a document in which it recommends reversing the burden of proof if an individual is accused of a hate crime. And yet that is what the Department of Justice has done.

The report also says that “the victim does not need to have the protected characteristic themselves, simply to be perceived by the perpetrator as being associated with it.” As an example, the report says this would extend the hate speech and hate crime protections to someone who works providing services to a protected group. So, suddenly, NGO workers up and down the country will find themselves protected under hate crime and hate speech legislation despite the fact they aren’t even members of the protected groups.

We have, in those three provisions alone, a recommendation to reverse the burden of proof, a recommendation that non-abusive speech should be subject to legal scrutiny to determine if it contains secret hate speech, and a recommendation that general activists should be able to be protected by hate speech and hate crime laws. Any one of those is a bad idea, but the three of them together seem deliberately designed to chill public debate and insulate interested parties from oversight, review, or criticism.

In the same way, we are told by the report, judges should presume that anything said on a public forum is intended for public, rather than private consumption, and that it should be the job of the accused to prove that this is not the case.

The report was written following on from a consultation that received over 3,600 submissions, of which 182 were “detailed written submissions”. The line is being wheeled out that this shows that the report is legitimate and based on public feeling on the issues, but just because 3,600 submissions were made does not mean the report is in any way representative of the general views contained within those submissions.

The Edmund Burke Institute put in one of those 182 “detailed written submissions”, you can read it HERE, and followed it with hours of directly briefing Department of Justice officials, but effectively nothing the EBI said about the need to protect free speech, and the dangers that hate laws represent to civic society, is reflected in the final report. Somewhat of an odd situation given that the report states that it provides “a comprehensive overview of the contributions made by almost four thousand contributors who participated in the public consultation.”

The report talks about the need to protect free expression and to ensure that “legitimate” discussion and debates are not stifled. Multiple times throughout the document it says that free expression should be protected and “robust safeguards” should be included in any legislation. Unfortunately, the report doesn’t contain a single recommendation or suggestion as to how that could be done. Ideas as to how hate speech and hate crime legislation could be implemented whilst protecting free speech are, according to the Department of Justice, “in the conceptual stage.” A situation which, it would seem fair to say, does not indicate that “robust safeguards” rated terribly highly in the Department’s thinking when they wrote the report.

There are notes in the report about the need to protect free speech, but every concrete recommendation the report contains relates to enacting expansive laws in a way which ensures they have a high conviction rate. One of the key problems with the Incitement to Hatred Act, we are told, is that it is too difficult to convict people under it, because you need to show the accused actually intended to incite hatred. That need to show intent is to be relegated to the scrapheap of history, and the need to show you were reckless as to whether or not what you said could be hateful will be the new measure.

The report is so one-sided in its approach it seems fair to conclude that those who said that engaging with the consultation was pointless, because the outcomes are already been determined, were correct. The report does not give any real thought to the potential consequences of what it recommends and could as easily have been written by one of the more authoritarian activist groups. The report, on page 25, even includes “freedom of expression” in a diagram of “types of prejudice” which “were identified consistently by participants as giving rise to incidents of incitement to hatred and hate crimes throughout.”

There is nothing balanced or proportionate about what is recommended in this report, and the recommendations within it are simply incompatible with any desire to protect free expression and prevent chilling public discourse. We have seen civic campaigns in other countries fight back against the sort of legislation the Department of Justice wishes to bring into force in Ireland, but those countries have something which Ireland does not – a civic society and NGO sector that cares about, and is willing to fight for, human rights and free expression. That does not exist in Ireland, it has not existed for many years.

The NGOs who would protect your rights in other countries will in Ireland sit, smile, occasionally nod, and work with the Department to achieve the highest conviction rates possible.

The report is available HERE.

CAROL NOLAN:  ‘Consensus’ on abortion policy is being stage managed by the HSE