Toward the end of August, Gript was able to demonstrate that from 2016-2019 the National Women’s Council of Ireland were allocated €270,000 under The Scheme to Support National Organisations (SSNO) administered by Pobal on behalf of the Department of Rural and Community Development.

We also pointed out at the time that this was more than The Simon Community, The Rape Crisis Network, or the Irish Association for Palliative Care received under the same Scheme.

So, while the GNAR are happy to accuse the Irish state of engaging in ‘Institutionalised racism,’ that has not stopped it from belonging to an umbrella organisation that has taken hundreds of thousands of euros in support from that allegedly ‘racist state.’

In fact, organisations like the European Network Against Racism, to which the Irish branch of ENAR are affiliated, are almost entirely dependent on funding from governments and groups like The Open Society and have practically nothing in the way of direct voluntary support from the public by way of donations.

Donations to the European Network Against Racism in 2018 show that only 2.6% of its funding came from public donations. 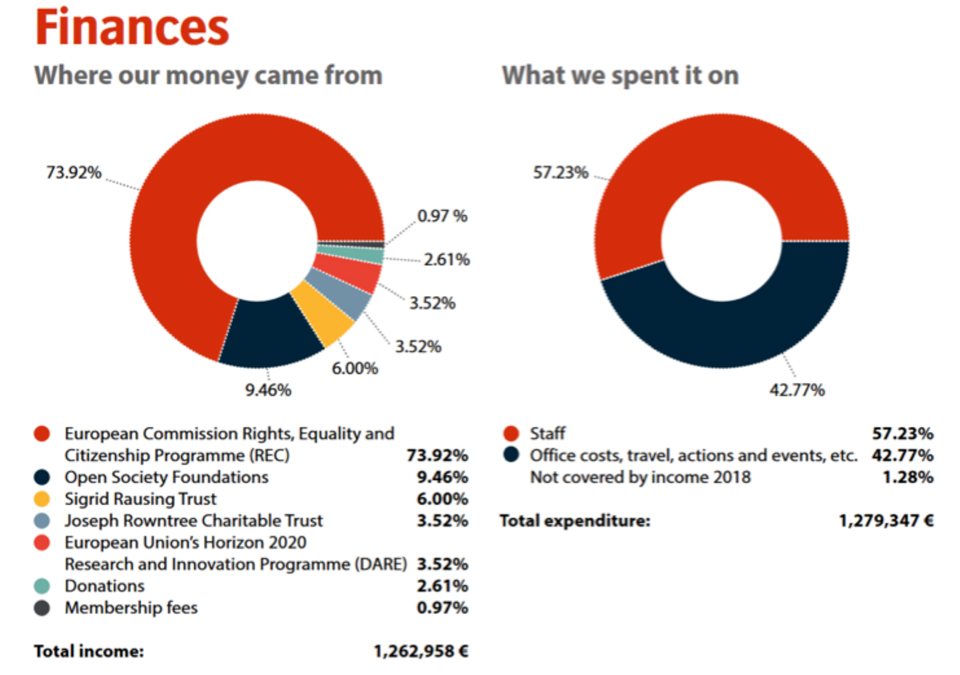 Why is this any of this relevant? It is relevant because a large part of the criticism directed at Noel Grealish by GARN and EARN supporters has focused on his apparent ‘sponging’ off the state.

The impression has been created that somehow these ‘anti-racist’ organisations maintain a pristine and virtuous distance from the state and instead are financially backed through major grass roots support.

The opposite is actually the case.

Much has also been made of Deputy Grealish making use of public money to carry out his representative duties.

This is almost laughable given that as can be shown above, groups like the Galway Network Against Racism belong to umbrella organisations who routinely spend almost half their budgets on ‘travel’ ‘actions’ and ‘office expenses.’

The key issue here is not about whether we should support measures aimed at combatting racism. Racism is ignorance and stupidity wrapped in hate and it needs to be condemned.

The information on which the SSNO funding for The European Network Against Racism Ireland Limited is based can be found here.