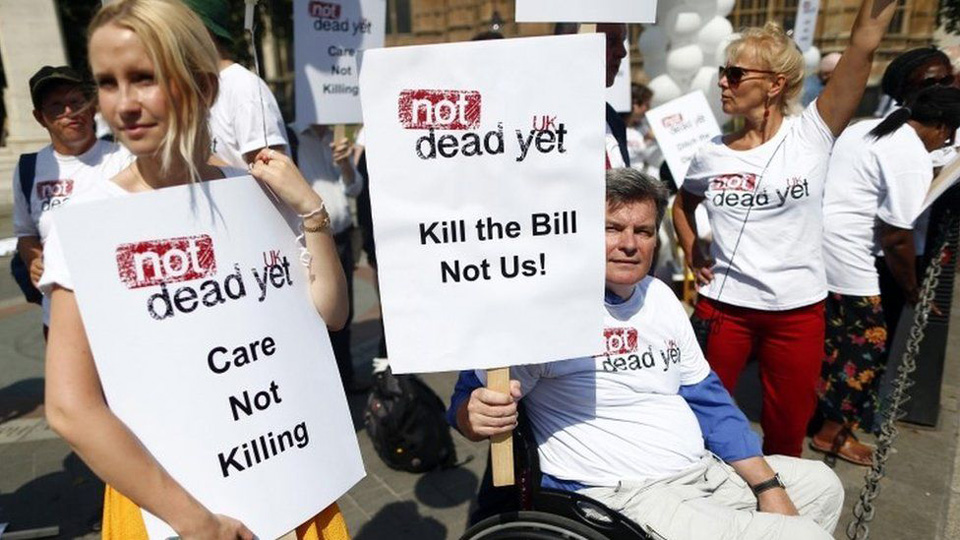 A protest in London against the assisted suicide bills there

Leading medical experts have been joined by many of the country’s top professional medical bodies in opposing a bill which seeks to legalise Assisted Suicide in Ireland. They warned that the bill was “deeply flawed” and left people at “significant risk”.

Submissions from medical professionals made to the Justice Committee on a bill proposed by Socialist TD, Gino Kenny, show firm and widespread opposition to the move to legalise Assisted Suicide despite a strong media campaign pushing for change.

Consultants in palliative medicine, who provide care to people with terminal illnesses, have been particularly vocal in opposing the bill, with the Irish Palliative Medicine Consultants Association (IPMCA) warning of risks to vulnerable people.

Now, their opposition has been joined by some of the leading medical bodies in Ireland who say, amongst other concerns, that they fear pressure will be brought to bear on vulnerable people who may be led to believe they are a burden to society.

The Royal College of Surgeons in Ireland said it believes “the introduction of euthanasia will have a harmful effect upon society” and would “do more harm than good.”

It feared that “legalisation of voluntary euthanasia and physician assisted suicide would create a precedent to extend the practice to handicapped and sick individuals also, who do not suffer so much themselves, but rather are a perceived burden to society.”

Dr Sarah McLean, a consultant in palliative medicine at St Vincent’s Private Hospital told the Irish Times that the Bill is ‘deeply flawed and lacks adequate safeguards’. Without these protections, society’s most vulnerable risk being pressurised into seeking assisted suicide, she told the paper.

Chair of the IPMCA, Dr Feargal Twomey,  also told the Irish Times that “the Bill, as it stands, is very open to significant misuse and abuse and encompasses any person in Ireland who has any chronic condition”.

The  IPMCA has previously told TDs that they are strongly opposed to Assisted Suicide and warned “for the vulnerable dying, laws that make doctors the decision makers are unsafe.”

Now, the Irish Society of Physicians in Geriatric Medicine, which says it represents over 130 specialists in the care of older people, says it has “deep concerns about the many negative impacts of physician-assisted suicide and euthanasia on the practice and ethos of care during life and for end of life care.”

It said it wished to give the “strongest possible endorsement to the 2017 and 2020 Position Papers of the Royal College of Physicians in Ireland” – position papers which had opposed moves to legalise Assisted Suicide.

The College of Psychiatrists of Ireland said it was “concerned that the enactment of this Bill may eventually lead to physician assisted suicide for people with mental disorders, as has occurred in in the Netherlands and Belgium. The College said that it was bringing “numerous defects in the Bill” to the attention of the Justice Committee, and asserted that it “does not support the Bill and believes that no changes can make it acceptable.”

Some 2,172 doctors and healthcare professionals have now signed a statement which states that “as good healthcare already allows people to die with dignity in Ireland, a Bill introducing assisted suicide is therefore not necessary”.

The medics said they were “gravely concerned by the proposal to legislate for assisted suicide and euthanasia, also described as assisted dying in Ireland. As healthcare professionals we have respect for each individual, value personal autonomy and also share an interest in protecting and advocating for people who are nearing the end of their lives and who may be vulnerable and at risk.”
They warned of the danger to vulnerable people saying “we believe the bill creates risks for many receiving healthcare that outweigh any potential benefits.  This concern is based on our collective experience over many decades of providing health care to people and their families in Ireland.”

Last October, TDs voted for the proposal – named Dying with Dignity Bill – to pass to committee stage by 81 to 71 votes. Ten Fine Gael TDs and four from Fianna Fáil joined liberal and left-wing TDs last night to ensure the Assisted Suicide bill passed its second stage in the Dáil.

At the time, critics said that TDs were not listening to medical experts on the issue. Not one medical body has come out in favour of Mr Kenny’s bill to date.

An Irish human rights body has also described the “title and purpose” of the ‘Dying with Dignity’ bill as “potentially misleading”, saying that the legislation is really about allowing doctors to assist patients to end their own lives.