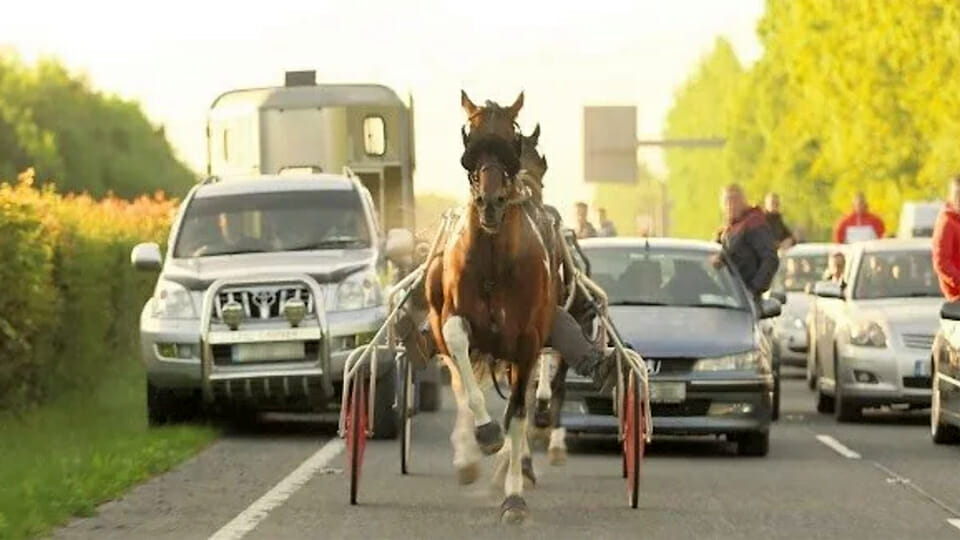 Footage of a sulky race being held in the early hours of last weekend on the N7 near Citywest in Dublin has brought the issue back into the public spotlight.

For those unfamiliar with the practice, here is a link to the N7 video which will give you some idea of what is involved.

It can be, and indeed often is, an extremely dangerous practice for both the horses and humans involved.
One of the most appallingly tragic incidents occurred in 2016 when a 12 year old child, Sean Doyle, died after he was thrown from a sulky car beneath the axles of an oncoming truck.

As reported by the Journal.ie at the time, Sean was one of three passengers on the sulky when the accident happened at St Cuthbert’s Road in Clondalkin.

It is a simple matter of fact to state that the practice of sulky road racing is almost universally engaged in by members of the Travelling community.

Indeed, Traveller representative organisations like Pavee Point have long accepted that Travellers who keep horses for the purpose of sulky racing tend to be concentrated in particular areas, such as Cork, Donegal and Tipperary.

Pavee Point also accept that such racing can be highly competitive and that winners are given” high levels of respect” and substantial prize money even while the practice remains the subject of “much negative media attention.”

The problems and the dangers associated with sulky racing eventually led in 2018 to the Minister for Agriculture, Michael Creed, to provide contracts for ‘education programmes’ to be established in Garristown in North Dublin and at locations in Tipperary, Cork and the Midlands.

Each of these courses cost €21,650 to cover the various course modules, specialist speakers and location rental and each had “a specific requirement that members of the Travelling Community be catered for.”
It is not clear how many more of these educational courses were provided in 2019, so all we can say with certainty for now is that €86,600 is the lowest amount handed over by the Minister.

This information was only provided when Independent Tipperary TD Mattie McGrath pursued the Minister on what efforts were being taken to address the issue of illegal sulky racing.

In fact, Deputy McGrath appears to be the only TD who has taken active measures to introduce specific targeted legislation to prohibit sulky racing “where no lawful permission has been granted.”

For his efforts he was told he would be shot “by the big boys.”
So, what really is the problem here?

Is it a lack of education and a genuine absence of awareness around horse and animal welfare?

Is it the fact that there is almost zero political will to enforce effective deterrence despite a plethora of legislative provisions (see The Animal Health and Welfare Act 2013 ) providing for fines, prison and confiscation of the horses involved?

The law is there, the resources are there, yet nothing appears to be happening in terms of meaningfully confronting the recklessness and cruelty associated with the practice of sulky racing on public roads.

There is also a clear sense that many people who wish to speak up are not doing so out of the fear of being labelled as ‘prejudiced.’

To deny that this is at least a part of the problem is simply head in the sand stuff that will serve neither ‘man or beast’ in the long term.