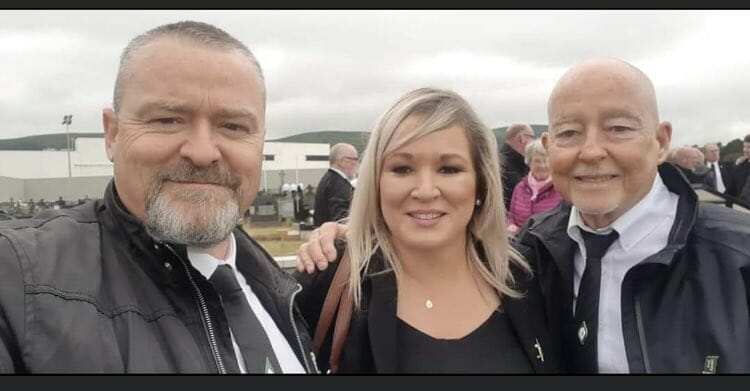 This basically comes down to a question of who you believe: Sinn Fein? Or your lying eyes?

“Sinn Fein”, will come the answer from lots of you who believe the party can do no wrong. Here’s Michelle O’Neill, with the latest line on this, which is a load of nonsense:

“There has been considerable controversy over my attendance at Bobby Storey’s funeral.

….“Bobby’s family also must have space to grieve.

“If the regulations had prevented me from attending his funeral I would have obeyed those regulations.

“At the funeral and mass I kept to the regulations as I have advised others to do.

“The PSNI will look into all of this.

“It is unfortunate that this matter has divided the Executive.

“We have important work to do and I firmly believe that all the parties of the Executive are committed to this and to powersharing.

The bit in bold is – and there’s no other way to put this – complete nonsense. Here’s Michelle O’Neill at the funeral:

And here’s Michelle O’Neill last week, spelling out what the regulations are:

There are really only two things that you can believe here: Either Michelle O’Neill is standing two meters away from those two chaps in the photograph, or Michelle O’Neill is brazenly lying to the public. Which are you going to believe? Being a good Sinn Feiner probably requires you to believe that two meters is exactly how far away she is from those two fellows, but the rest of us might come to a different conclusion.

The problem here, politically, for Sinn Fein, is that they’re caught between two stools. The truth of the matter – as even the most devoted Shinner knows – is that a good soldier like Bobby Storey had to get his big send-off, pandemic or no pandemic. It’s absolutely vital to the long term success of the Sinn Fein project that fellas like Storey, who robbed banks and organised various unspeakable cruelties in the name of the “struggle”, be re-purposed as human rights advocates and community organisers and “architects of the peace process”. They couldn’t give him a state funeral, obviously, so they had to go all out to make it look like a state funeral, complete with an Irish tricolour on the coffin, and all the rest of it.

On the other hand, there’s a pandemic on, and Sinn Fein need to be seen as responsible stewards of the public health – especially, in Northern Ireland, in contrast to the feckless buffoonery of the hated Boris Johnson. It’s very important to the cause of a United Ireland that Sinn Fein can make the case that they – not the Tories – can be trusted to look after public health.

So how do you square that circle? You can’t, is the short answer, and therefore Sinn Fein have little option but to just brazen it out, with the usual mixture of moral outrage and whataboutery.

And in fairness, they have a point with the whataboutery. Few Irish politicians can condemn them on that score – not after Leo Varadkar’s cans in the park outing, or the conspicuously large funeral for Garda Colm Horkan last week.

But at the end of the day, they’ve got to choose between one defence or another: Either they didn’t breach the regulations, or they did, but it’s okay because other people breached them first. They’ve gone with option A: “I kept to the regulations as I have advised others to do”.

That’s a blatant lie, of course, but partisanship will ensure that by the time you get to the comments, a whole load of people will be professing to believe it.