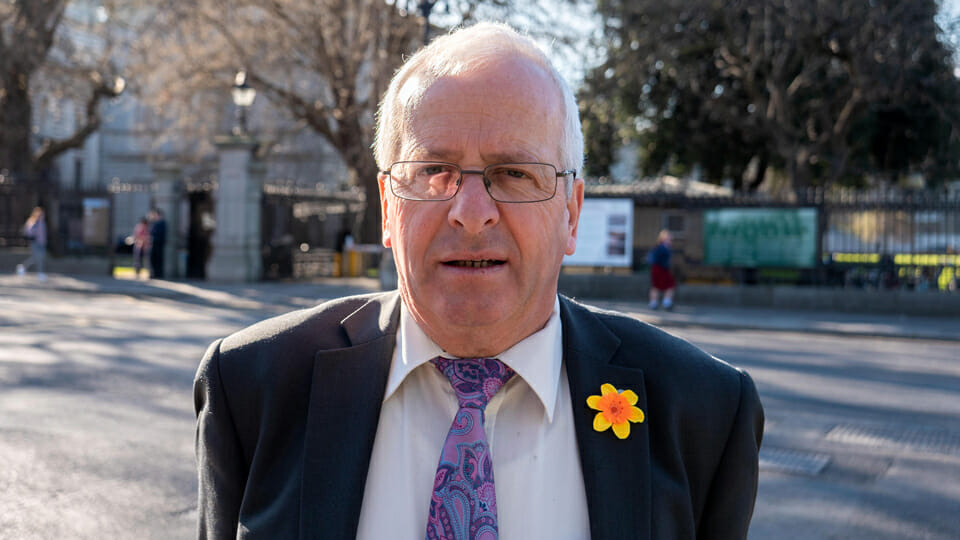 Mattie McGrath is a politician a lot of people deeply admire (full disclosure, since people writing about politics really should tell you these things: He got my number one vote last Saturday) but come on now, this is a bit of a rush of blood to the head, isn’t it?

“Independent Tipperary TD Mattie McGrath has said that strong consideration must be given to the idea of forming a National Government in order to avoid destabilising level of political impasse.

Deputy McGrath went on to say that such arrangement could utilise the d’Hondt method as a fair means of allocating positions and seats within such a government :

“Given that we are in such unchartered territory and given the absolute necessity of ensuring we have some kind of political stability for our people, then I believe all options should be considered with respect to government formation.

“The single most important objective here is that we create conditions where the needs of the people can be met.

“It is time to set aside narrow political interests and to put the needs of the people first.

“If that involves all parties and groupings in the Dáil compromising in order to agree a common government platform, the maybe that is something we ought to consider.

“This election has sent the political class a clear message from the people; they want delivery, they want results.

“We all should be courageous and imaginative enough to consider any option which will bring that about including that of a National Government,” concluded Deputy McGrath.”

“D’hondt” is the system they use for allocating seats in the Northern Ireland executive. How it works, basically, is that the biggest party fills the first seat in cabinet (so Micheal Martin would be Taoiseach), the second party gets the next one (Mary Lou McDonald would be Tanaiste) and the third party gets the next seat after that (Varadkar in Finance?) and so on until all fifteen cabinet seats are filled.

A rough calculation would give you something like 3 FF ministers, 3 SF, 3 FG, and one each from Labour, the Greens, the social democrats, people before profit, the rural independents, and the left wing independents.

It might be worth doing, actually, just to be a fly on the wall at those cabinet meetings.

On the other hand though, to be fair to Mattie McGrath, isn’t this sort of what the electorate voted for? It’s worth remembering, as we watch the politicians desperately trying to make sense of the election result, that this absolute chaos is what the public voted for.

We could have made a decisive decision last Saturday as a country, and picked an obvious Government – but we didn’t. We picked the most divided, split, ungovernable Dáil since independence. There are two options: share power with people you can’t stand, or have another election and ask the people to have a second go at making a decision.

If we don’t want another election, then why not, as McGrath suggests, just embrace the chaos, join hands around the fire, and try singing kum-by-ya?

The problem in this scenario would, of course, be stability. The interests of politicians and the interests of the country rarely align in this kind of situation. Imagine if such a Government had to introduce a tough budget, if there was an economic downturn. There’d be a massive electoral reward for being the first party to say “we can’t go along with this hardship” and walking away.

Besides, how could such a Government ever make decisions even in normal times? Leo Varadkar and Richard Boyd Barrett do not agree on any subject. Because Government makes decisions by secret votes of the cabinet, you’d be asking people like Boyd-Barrett to go out and sell decisions to the public that they fundamentally disagree with. It wouldn’t be right.

At a basic level, McGrath’s idea reflects the results of the election – this mess isn’t the fault of any politician, it’s all the fault of the voters. You can’t blame Mattie for trying to suggest that everyone works together – it’s at least an attempt to come to terms with the situation.

But if the politicians can’t figure all of this out, another election is the only option.

Let’s hope we can make a decision properly next time.

Wait: Were Irish hospitals….. never under that much Covid pressure?