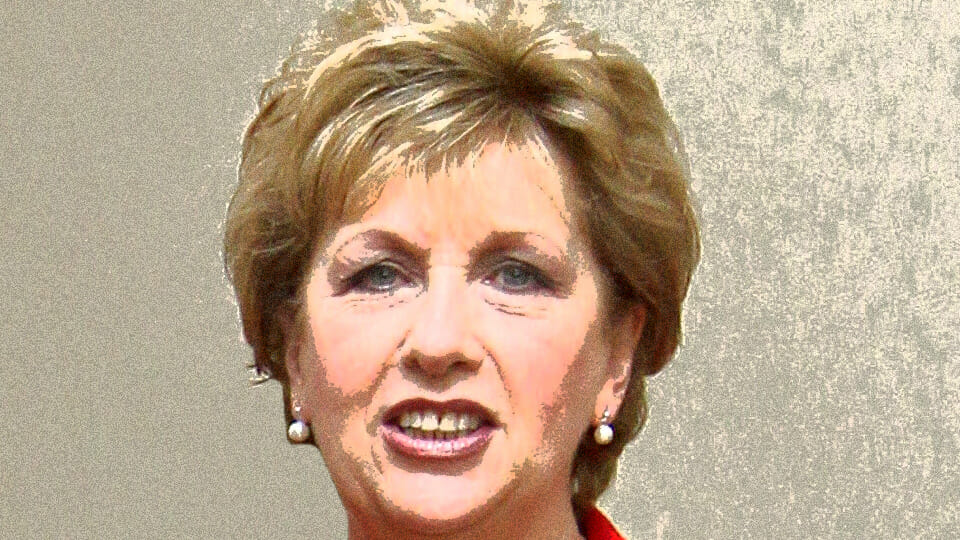 Former President Mary McAleese seems to rather enjoy courting controversy these days, as demonstrated in her recent deliberate attempts to slur Pope John Paul II by taking a quote out of context  from his book Love and Responsibility and failing to give the full details regarding its meaning. Indeed, one can only wonder why McAleese remains a member of the Catholic Church, she seems to have so many issues with its teachings, including abortion. However, it may come as a surprise to some to discover that McAleese was once a staunch pro-life feminist and was happy to publicly identify as such. In 1997, McAleese wrote the introduction to a book of pro-life feminist essays called Swimming Against The Tide.

Edited by Angela Kennedy, it included other prominent Irish women such as Professor Patricia Casey and Breda O’Brien, both of whom have remained pro-life and whose voices were heard in the lead-up to the Eighth Referendum vote. International pro-life women were included in the book including the British writer Ann Farmer and the American Rachel MacNair.

Earlier in 1997, this book of essays was even promoted in the vehemently pro-abortion Irish Times, in a piece entitled Feminists against abortion, in which a section from McAleese’s introduction was quoted: “In her [McAleese’s] foreword to Swimming Against the Tide, an anthology of pro-life feminist opinion, she wrote, “The myth that to be a feminist is to be pro-choice has forced many women to resign from the name of feminism, to settle back bruised into the silence of the margins.” She further challenged this myth, writing, “There is nothing natural about the deliberate and widescale lawful and routine elimination of babies.” She explained her opposition to abortion for survivors of rape, describing it as “a rather primitive act of revenge or retribution vented on a foetus.”

Her voice resonates as one of a growing chorus of those who, in her words, “have first grown stronger and then emerged as strident full volume voices insisting on their intrinsic moral, human right to speak and be heard without seeking permission … . There is a day coming when we will hear the voice from within the womb, when its own authentic pain will be undeniable, when we will know with certainty that it is saying, ‘I want to live. I have a right to live. I do not need your permission to live.’”

After the publication of Swimming Against the Tide, McAleese seemed to have been happy to be recognised as a pro-life feminist, as she was featured in the USA Feminists For Life  in their Remarkable Pro-Life Women Winter 1998-99 publication, in the “International Leaders” section, alongside the former late Prime Minister of Pakistan, Benazir Bhutto. In the same year, McAleese invited then FFL President Rosemary Bottcher, former board vice president Maureen O’Connor and Executive Director, Serrin Foster (who is now President) to join her and her husband at a recital by their son’s school choir at Áras an Uachtaráin. Serrin Foster stated: “Seated in a grand yet intimate stateroom as the choir sang songs about gratitude and the celebration of life, I was overwhelmed by the realization that a feminist — a pro-life feminist — was president of a nation.”

There is a photo included on p.3 of the magazine of all four women at Áras an Uachtaráin, with Mary McAleese smiling broadly for the camera. Foster clearly admired McAleese and her work: “President McAleese’s commitment encompasses the aged, those in poverty, the unborn, and those affected by violence in Northern Ireland.”

Fast-forward twenty-one years and it seems that McAleese is supposedly as vocal as ever on human rights injustices but preborn children appear to have mysteriously vanished from her list of those whose human rights are violated. In another Irish Times interview shortly before the Eighth Amendment referendum, McAleese had totally re-written her stance on abortion and indeed, her reason why she voted for the Eighth Amendment in 1983. She fudged her words and attempted to suggest that she did so because: “I have to admit that I voted in favour of it back then because we did not actually have any statute-based law at all, so I thought here is an opportunity to have it clarified.” McAleese was at pains to let it be said that she didn’t campaign for the Eighth but her response was cowardly and remarkably hypocritical. The manner in which McAleese openly bragged about her “yes” vote in 2018 and childishly stated that she would certainly not be attending confession for this was truly cringeworthy.

It is incredible that she had the audacity to then add: “Times have changed. And one of the things that has changed is our understanding of our human rights. Among those human rights: freedom of conscience, freedom of expression, freedom of opinion, freedom of religion, freedom to change religion.” This mindless tirade of nonsense doesn’t remotely explain why preborn children’s rights have been airbrushed from McAleese’s now ever-expanding list of what she sees as human rights violations.

As any prolifer already knows, it is unusual for someone to move from a pro-life to a pro-abortion stance, as abortion advocates tend to fall back on tedious soundbites endorsed by men and utilise media censorship to force their message on the public but being pro-life involves being more informed and educated on the human rights violations of the abortion industry, such as its huge profits, exploitation of women and girls and its foundation in eugenics, to name but a few. Politicians frequently become pro-abortion to further their career, as demonstrated so well when Ireland’s politicians took hypocrisy to a whole new level in 2018. While many of the main Repeal political players had previously endorsed life, McAleese’s flip-flopping was particularly despicable, as she had made it public knowledge that she was pro-life, had recorded this in a book, had been interviewed for a pro-life publication and had invited the American leaders of Feminists for Life to her taxpayer-funded home in Dublin.

In the May 2018 Irish Times interview, when asked if she would keep speaking out, McAleese said she would do so “for as long as there is breath in my body”. Truly remarkable, then, that she appears to have no spare breath left to explain why she now embraces a pro-abortion stance, and no longer has any interest in speaking out against the poisoning and dismembering of innocent preborn children in the womb.

There are many worthy and commendable pro-life women that deserve to be viewed as inspirational role-models and it is worth reading the other individuals who feature in FFL. However, McAleese no longer warrants being included in such a worthy selection of women who work hard to protect life but deserves to be expunged from such a list. It is time that she finally shows some humility and listens to her own words from 1997: There is a day coming when we will hear the voice from within the womb, when its own authentic pain will be undeniable, when we will know with certainty that it is saying, ‘I want to live. I have a right to live. I do not need your permission to live.”

Where next for Irelands “patriot” movement?