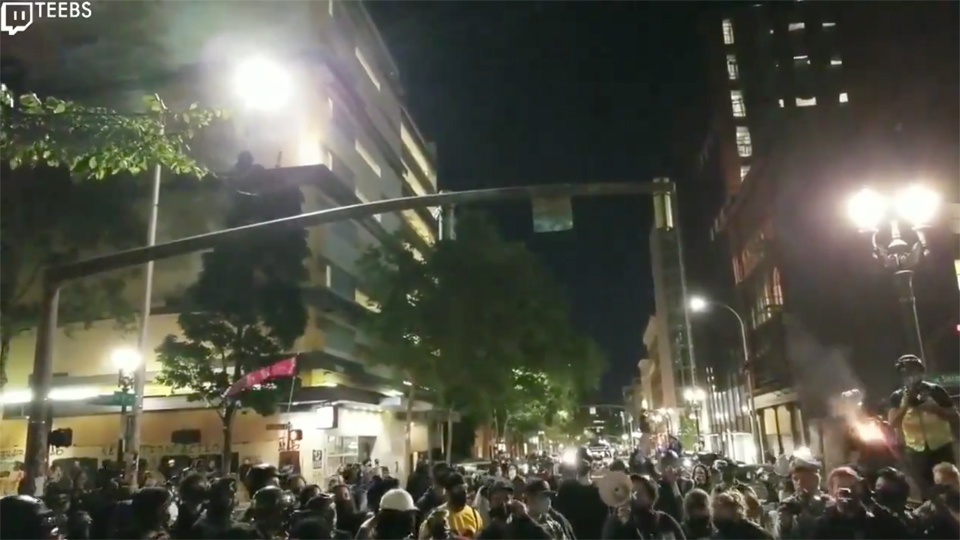 A journalist on the ground in Portland has posted a series of disturbing videos which he says shows Antifa and Black Lives Matter activists cheering and gloating after a Trump supporter was murdered in the area.

Andy Ngo, who has significant experience covering Antifa violence, posted a video of a mob applauding and cheering a speaker who described the murdered man as a ‘f**king nazi’ and said ”we took out the trash’.

“He was a f—ing Nazi! Our community held its own.”

Antifa & BLM in Portland celebrate the homicide of a purported Trump supporter who was affiliated with Patriot Prayer, a Portland-area conservative group. pic.twitter.com/xjIWk0KHN2

Commentator Miranda Devine, writing in the New York Post, said that it was “spine-chilling to hear activists in Portland cheering about the cold-blooded murder of a Trump supporter.”

She pointed to a video shot by Justin Dunlap, 44, who was livestreaming protests in downtown Portland last Saturday, which appears to show the moment that Aaron J Danielson, a supporter of the conservative group Patriot Prayer, was shot in the chest and died on Southwest Third Avenue near Alder Street.

The video captures a man’s voice saying: “We got a couple right here.” Two shots then ring out.  Mr Danielson was wearing a cap supporting Patriot Prayer when he was shot.

Patriot Prayer had organized a caravan of cars through Portland in support of President Donald Trump, but the shooting of Mr Danielson occured after most of the caravan had  left the the city’s downtown streets.

Antifa burn a US flag to celebrate the death of the man shot in downtown Portland. They call him a “fascist” despite not knowing who he is. #PortlandRiots pic.twitter.com/3CjdcWDl1S

He was also strongly critical of the media for confusing the identity of the dead man and suggesting that Mr Danielson supported terrorism.

This is the most horrific mistake I’ve seen in Portland journalism.

Far-left reporter @alex_zee of the @portlandmercury wrongly accused the murdered Trump caravan participant of being an armed man who supported terrorism. https://t.co/mlqoutnDiD pic.twitter.com/hCrl7GMrTn

Friends of  Aaron J Danielson told CNN that he was not an agitator or radical, but a “freedom-loving American,” who had a “huge  heart”.

The violence that has rocked several American cities in the past three months seems to be escalating, with increasingly chaotic scenes dominating the news cycle.