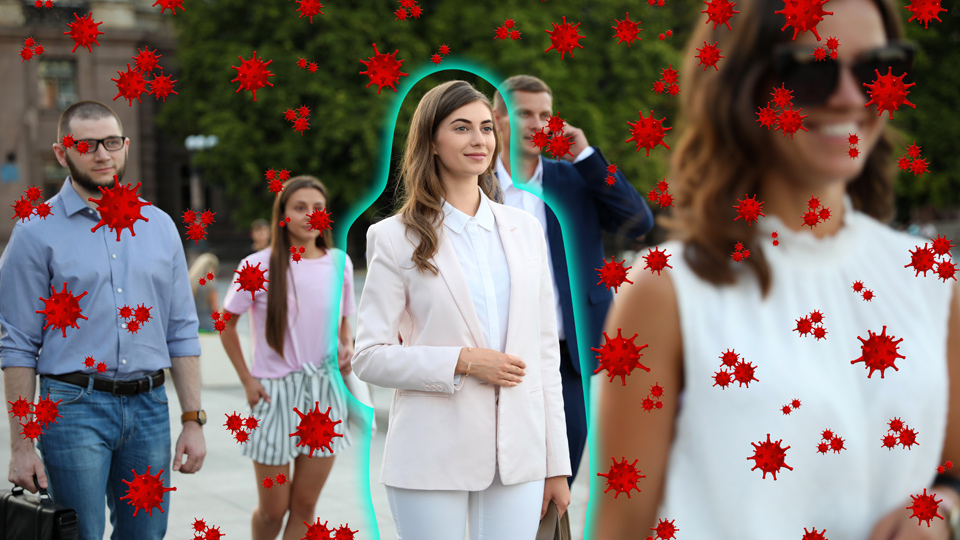 I’ve had Covid-19. While I’m acutely aware that so many people have suffered terribly and died from the virus, for me it felt like a nasty flu.

I was stretched for about a week with fever and chest pains – and then fatigued for another fortnight until my energy levels got back to normal. The worst aspect was a paralysing headache of a kind I’ve never experienced before. So while my brush with Covid  was pretty lousy, I never needed to go to hospital, nor was my life in any danger. I’m thankful for that.

It does mean however, that according to the fundamental tenets of immunology, I should now have immunity to the virus. In common with almost everyone who has recovered from an infection, my immune system retains a memory of the virus and will kick into action  to identify and fight off Covid-19 if it tries to reinfect me.

This is our long-term immune protection system and it involves antibodies in the blood which recognize foreign substances and neutralize them; T cells to kill pathogens and B cells to make new antibodies when called on to do so.

It’s a pretty amazing thing, this immune system of ours: and this defensive ability that almost every human being enjoys has been key to our ability to survive and overcome viral threats since we were living in caves. It’s how our body protects us against disease and reduces the severity of infection, and it does it all automatically.

I was somewhat surprised then, to see the response that Minister for Health, Stephen Donnelly, recently gave to Clare TD, Michael McNamara when he was asked one of the most pertinent questions around this issue.

McNamara wanted to know whether the HSE was proposing to vaccinate people who had already contracted Covid-19 “in light of the suggestion that they may enjoy some protection arising from their previous infection”.

I asked the Minister for Health how many people who have contracted #COVID19 have been vaccinated and whether it is proposed to vaccinate such people in light of the suggestion that they may enjoy some protection arising from their previous infection. pic.twitter.com/WAW9MCLerC

In response, Stephen Donnelly waffled a bit, acknowledged that studies in Britain did suggest that contracting Covid-19 did give a “large amount of protection”, but then admitted that what does make perfect sense would not, in fact, be happening.

“The current position is that it [previously having Covid] is not one of the factors” considered in allocating vaccinations, the Minister said, adding that he had been told that because people were infected with different viral loads there was uncertainty regarding the protection provided by having had the virus.

“The position right now is, very clearly, whether or not you’ve already had Covid is not taken into account in terms of vaccination,” he told the Dáil.

There are several observations to make about both what Minister Donnelly said and the frankly puzzling policy that has been adopted by  the Irish government.

Firstly, let’s turn to that great bastion of wisdom on all things Covid, the World Health Organisation. They say that  because “COVID vaccines have only been developed in the past months, it’s too early to know the duration of protection of COVID-19 vaccines. Research is ongoing to answer this question.”

They then confirm that “most people who recover from COVID-19 develop an immune response that provides at least some period of protection against reinfection – although we’re still learning how strong this protection is, and how long it lasts.” So the WHO acknowledges that what has always been true for viruses is also true for Covid, namely that having recovered from an infection usually gives you some immunity to that infection.

While the WHO says we’re still learning, the larger studies on immunity from Covid-19 after infection seem pretty conclusive. Research published in January in Science found that “the immune systems of more than 95% of people who recovered from COVID-19 had durable memories of the virus up to eight months after infection”.

It’s important to note that while eight months was the longest period the study could speak to (since the Covid-19 virus only emerged last year) the results of the study indicated that immunity after infection was being conferred for years and perhaps decades.

That’s because the researchers found the immune responses remained strong in the majority of people studied – with antibody levels remaining stable over time, and the levels of other protective B and T cells increasing.  ”

“Several months ago, our studies showed that natural infection induced a strong response, and this study now shows that the responses last,” Drs. Daniela Weiskopf who co-led the study said.

“That amount of memory would likely prevent the vast majority of people from getting hospitalized disease, severe disease, for many years,” Shane Crotty, a virologist at the La Jolla Institute of Immunology who co-authored the study told the New York Times, who described the research as the “most comprehensive and long-ranging study of immune memory to the coronavirus to date”.

The paper noted that the new research “squares with another recent finding: that survivors of SARS, caused by another coronavirus, still carry certain important immune cells 17 years after recovering” and that other studies showed the principles of immunology were holding up for Covid-19, including one study which showed “that people who have recovered from Covid-19 have powerful and protective killer immune cells even when antibodies are not detectable.”

This is all good news, but it seems Stephen Donnelly and his department seem to be unaware of what it should mean in terms of rolling out a vaccination programme they deem urgent and vital. Shouldn’t they be testing for antibodies before administering vaccines?

Isn’t it simply a waste of time and scarce resources making a vaccine available to someone who already benefits from the best vaccine of all, your own immune system if it has fought off and can identify Covid-19?

At least 221,000 people have been infected with Covid-19 in Ireland, and, though 4,357 have sadly died with the virus, most of those who recovered or are in recovery will develop a natural immunity.

In fact, since most people, according to WHO, are either asymptomatic or only develop mild symptoms with the virus, the number of people with antibodies might be more like half a million if estimates from studies on undetected infections are correct. One recent study found that at least half of all cases were undetected, while research published in the International Journal of Infectious Diseases in August found that there may be 2.3 undetected cases for every case confirmed. These ratios may vary across different countries and systems but it seems a safe bet that there are many more people who have developed immunity to Covid-19 than official confirmed numbers indicate.

So perhaps half a million people in Ireland may now have a natural immunity to Covid-19 – and we are certain that at least 200,000 have this protection. We can test whether this is the case by testing for antibodies before scheduling vaccines.

Isn’t an antibody test worth factoring into the vaccine rollout, then, especially as we continue to fail to meet our targets here in Ireland?

Who are the media platforms Fianna Fáil would deny taxpayer funding to?

Why do (some) liars, cheats, thieves and incompetents get state contracts?