Is The Establishment About to Turn on NPHET? 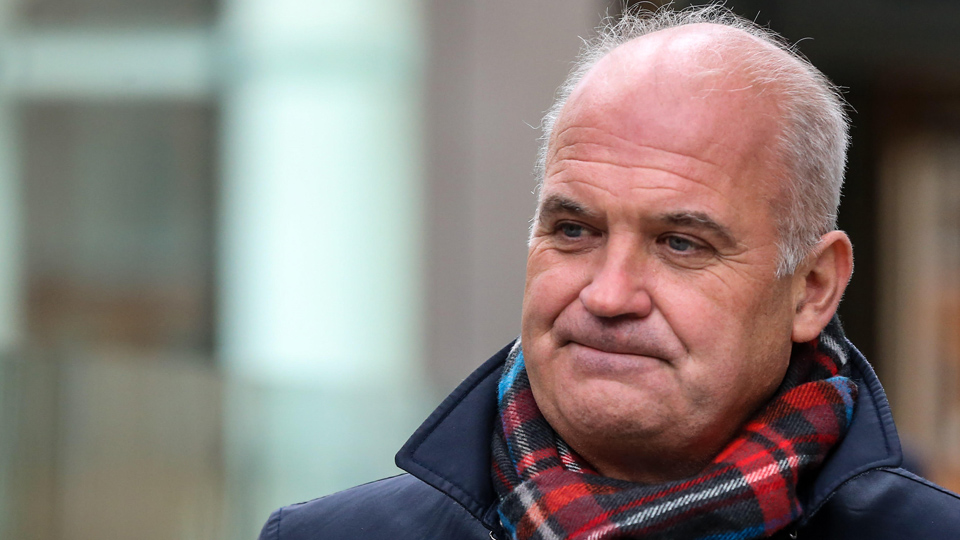 It has taken more than a year – one filled with of grief, suffering and misery across all cohorts of society – but the nation’s paper of record finally seems to be coming around to the idea that this never-ending catastrophe might have something to do with the secretive, unelected and unaccountable set of policymakers who have been driving policy throughout this grim, depressing period.

Martyn Turner does a profitable trade in cheap digs at Boris Johnson, Donald Trump, and anyone who questions the globalist agenda. More recently, his attention has been drawn to the various delays to the vaccination process (Martyn is in his 70s). On January 30th, apropos of nothing, he decided to have a dig at NPHET. It was quite a surprise, and a welcome change from the usual fare.

A week later, Fintan O’Toole informed us that science is wonderful and that it should never be questioned, however, it did need to be tempered with some common sense. It wasn’t an explicit criticism of NPHET, but I wonder if there was a subtle suggestion that we might reassess NPHET’s primacy in the policy hierarchy.

Perhaps I’m being too optimistic, but if the establishment is about to turn on NPHET we should all be grateful, because it might finally lead to a more honest appraisal of the utterly calamitous state of our nation. And while there is much to be said about NPHET’s leading role in that calamity, I would like to go back to the early days of NPHET, and recount how it came into being.

The WHO published its Strategic Preparedness and Response Plan in February 2020. The Plan communicated the WHO’s official health advice on the COVID-19 outbreak. For the national policymakers who were looking to the international experts for guidance, this report was essential reading.

Under the heading “Country-level coordination” the WHO had this to say (emphasis mine):

“A Public Health Emergency of International Concern will test the resilience of nations, businesses, and communities, depending on their capacity to respond. No single agency or organization can prepare for or respond to such an event on its own. Inadequate or uncoordinated preparedness of interdependent public and private organizations will reduce the ability of the health sector to control disease spread. A comprehensive approach to risk management is therefore required and must take a whole‐of‐society and whole‐of‐government approach.”

The WHO knew that a successful pandemic response would require the commitment of all stakeholders, including citizens, communities, businesses, the media, academia, civic institutions and all levels of government. It would also depend on the effective management and co-ordination of these groups, in what would be a volatile and uncertain environment. The WHO’s official position was that the group leading the national response should be a multi-disciplinary team with a perspective on every part of Irish society, so that they can fully understand the problem facing the nation, and explore every possible option in response.

The WHO calls this a ‘whole-of-government’ and ‘whole-of-society’ approach to pandemic risk management. It has been a key part of their pandemic influenza advice since at least 2009, and it’s easy to see why. A pandemic is an all-encompassing problem. It will expose hidden interdependencies among groups and organisations, and it will impose hardships on every cohort in society, whether rich or poor, old or young, public or private. It is far too big and complex a problem for one department or government agency to manage successfully.

Giving total responsibility to a group of medics was just about the worst thing you could do, and that is why the WHO went to great lengths to warn the world not to make this mistake. I don’t often quote Dr Tedros, but at the Munch Security Conference on the 15th of February 2020, his advice was very clear:

“this is not a job for health ministers alone. It takes a whole-of-government approach”

A Medic, a Different Kind of Medic, and a Chief Medical Officer

Were any of these people aware of the WHO’s decade-long stance on the need for multi-sectoral pandemic management teams?

It appeared not, as a week later the Expert Advisory Group (EAG) was formed. In Dr. Tony’s words, “the Group is made up of experts from across the disciplines bringing their multifaceted expertise to bear on Ireland’s ongoing preparedness.” If that sounds like waffle to you, you are right. There was nothing multi-anythinged about the EAG. It was just another group of medics (consultants this time) and more officials from the DoH. Medics advising medics. Things were getting worse.

Fortunately, it was around this time that the WHO started taking its responsibilities to the world a bit more seriously. Through its official statements, the WHO advised nations to adopt a “whole‐of‐society and whole‐of‐government approach” (3 February), and to “activate multi-sectoral, multi-partner coordination mechanisms to support preparedness and response” (12 February). A few days later, Dr. Tedros would issue his warning from Munich (15 February).

What was NPHET’s response to the WHO’s repeated advice to create a multi-disciplinary, multi-sectoral emergency management team?

In the first three weeks of February, both NPHET and the EAG met a total of three times each and in none of those meetings were the WHO’s recommendations for a whole-of-society response addressed. In fact, there was barely any mention of the WHO at all, beyond a cursory “the WHO current advice was acknowledged”. Yet over that period, the WHO was producing daily situation reports, it’s senior officials had made a great many speeches and statements, and the organisation had released its official COVID-19 guidance to the world.

Did anyone in NPHET read these reports? Were they paying any attention to the WHO?

Over the course of March 2020, the situation continued to deteriorate. Several more SubGroups were created and I won’t list them all, but the fact that one of them was called the ‘Guidance and Evidence Synthesis Subgroup’ tells you that NPHET’s focus was somewhere other than the national catastrophe that was unfolding all around them. If the 30-odd members of NPHET weren’t there to synthsise the evidence and provide guidance, then what were they there to do?

The EAG even got its own SubGroup and it was staffed by another 10 medics (academics this time) who would report to the EAG. The establishment of the Research SubGroup meant we now had medics (Research) advising medics (EAG) advising medics (NPHET). Was this really the optimal structure for managing the information flow around the COVID-19 pandemic? Was this how we were going to provide the best analysis and best protection to the Irish people?

What do you think the WHO would have made of this? Do you think this proliferation of Groups in line with their advice? And was this the optimal structure for managing the information flow around the COVID-19 pandemic? Was it producing the best analysis for policymakers? Did it serve the best interests of the Irish people? The nation’s death count suggested not.

While NPHET’s Groups were multiplying like the virus, the nation’s existing emergency structures were collecting dust. The Strategic Emergency Management Framework (SEM) had been signed off in 2017 by the then Minister of Defence – Leo Varadkar – and was to be a national layer on top of the more local Framework for Major Emergency Management (MEM).

These structures were designed to deal with severe weather, major flooding, or accidents involving hazardous chemicals and as such, may not have been the perfect structures to deal with the largest contagious outbreak of our times. On the other hand, they seemed to be exactly in line with the WHO’s advice on pandemic preparedness. The MEM included a Government Task Force that comprised:

“senior representatives of all Departments, the Health Service Executive, An Garda Síochána, the Defence Forces, the Health and Safety Authority, the Revenue Commissioners, Met Éireann, the Environmental Protection Agency, the Office of the Government Chief Information Officer, Civil Defence, the Office of Public Works, the Irish Coast Guard and other Agencies as appropriate”

To me, that looks like the multi-sectoral, whole-of-government team that should have led our response. It could have been beefed up with some experts in legal, economic, and geopolitical matters. It could have done with some community representatives too – notably the GAA – but clearly, this could have been the foundation of a good national emergency team.

Yet for some reason, this entire structure was bypassed, and NPHET was established in its place. Who made that decision? When was it made, and why? These are the kinds of questions that will need to be asked at the inquiry into this fiasco, and Leo Varadkar should be the first to answer them.

By the end of June, NPHET’s headcount had inflated from 11 to about 40, with another 6 in a DoH ‘secretariat’. NPHET was supported by the EAG (another 40 or so members) and a hodgepodge of Groups and SubGroups staffed by even more medics and medic-adjacent individuals. Who knows, maybe Dr. Frankenstein was one of them – it certainly bore a resemblance to one of his experiments.

Many of these Groups have now been disbanded, yet Ireland’s crisis continues unabated, underlining both the irrelevance of the Groups and the pointlessness of the whole endeavour. I can understand the policymakers starting off on the wrong foot in January 2020, but given such clear and consistent messaging from the WHO ever since, why was there no change of course?

Don’t get me wrong, I don’t think anyone is under the illusion that we should blindly follow the WHO’s advice – the UN’s inherent flaws are well known – but given that our policymakers went to great lengths to assure us that they would follow the experts’ advice, it is remarkable that what they produced was the exact opposite of what those experts advised. This needs to be recognised by the country. If the government and NPHET were doing what they said they were doing, how did they allow this to happen?

The issue isn’t just that they didn’t follow the experts’ advice. It’s much worse; it’s that they didn’t seem to be pursuing any kind of logical path at all. Surely no one could believe that this mess was the result of a logical, intelligent analysis. What problem could 100 medics solve, that 50 medics couldn’t? Who genuinely thought that the nation needed all these medics, but no other skill sets? Were other nations pursuing a similar approach? Who was in charge of this thing? What was the point of it all?

But then… maybe I’ve answered my own question there. Maybe we’re not supposed to know who was in charge. Maybe that was the point. By involving as many people as possible in multiple overlapping groups, it was always possible to point the questioner in a different direction. The longer and more complex the decision-making chain, the more difficult it is to attribute responsibility to any one part of it. It’s a natural defence mechanism for lousy policymakers. If something goes badly wrong, the public’s anger and the blame naturally dissipate across the whole chain, and no one individual is singled out.

Sir Humphrey would have been proud.