Is Sinn Féin voting against housing builds in order to gain political momentum from the housing crisis? 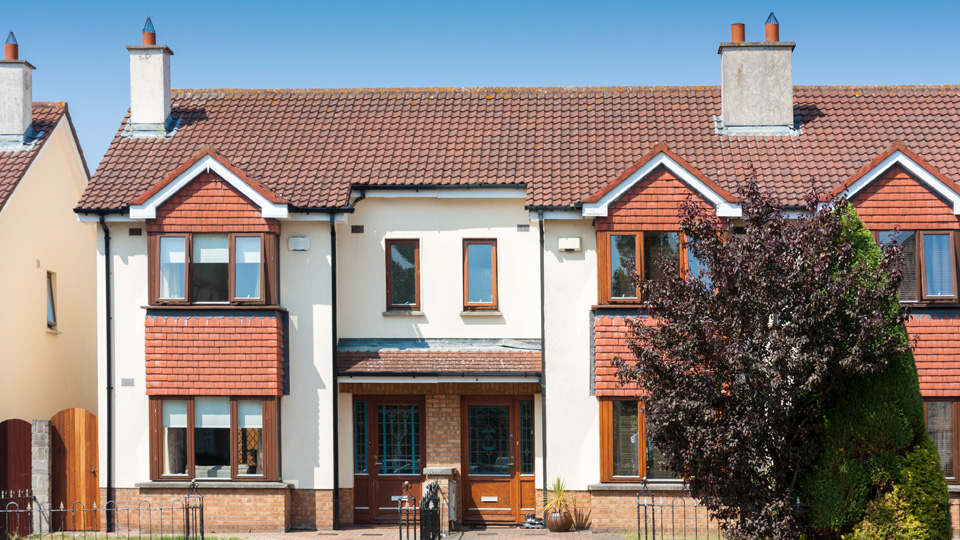 One of the rather more desperate attempts by Fine Gael and Fianna Fáil to recoup lost ground to Sinn Féin has been to focus on the latter party’s apparent track record in voting against proposals to build housing developments.

Sinn Féin has indeed pursued inconsistent policies, as we shall see, but the political reality is that voters will hold those in government most responsible for a failure to provide housing.

The 2019 local elections were a key turning point in Sinn Féin fortunes. People are inclined to forget how badly they performed in them, and in the European elections held on the same day. Sinn Féin lost 78 local council seats, and its vote fell by 5.7% to under 10%. It went from being the biggest party on Dublin City Council to winning just 8 seats.

Much of that vote collapse, as also seen on other councils where Sinn Féin had been part of the governing majority for five years, was due to their incompetence. They, and the far left, passed a plethora of motions on flags, circuses, Israel, and so on while neglecting the basic stuff people expect local authorities to look after. Housing being probably the chief of these.

Interestingly, until 2019, Sinn Féin, Fianna Fáil and Fine Gael almost always voted the same way on major housing motions, which tended to be opposed by the likewise now-reduced far left. These days, however, the Shinners have adopted the same position as the left councillors who opposed them when they were the biggest party on the Council.

The left and independent councillors, in fairness to them, have at least been consistent. Sinn Féin now vote against the sort of housing proposals that they not only supported, but in many instances initiated, between 2014 and 2019.

This chart, which has been doing the rounds on social media, shows the extent of the votes that have been cast against housing motions by the relevant parties. 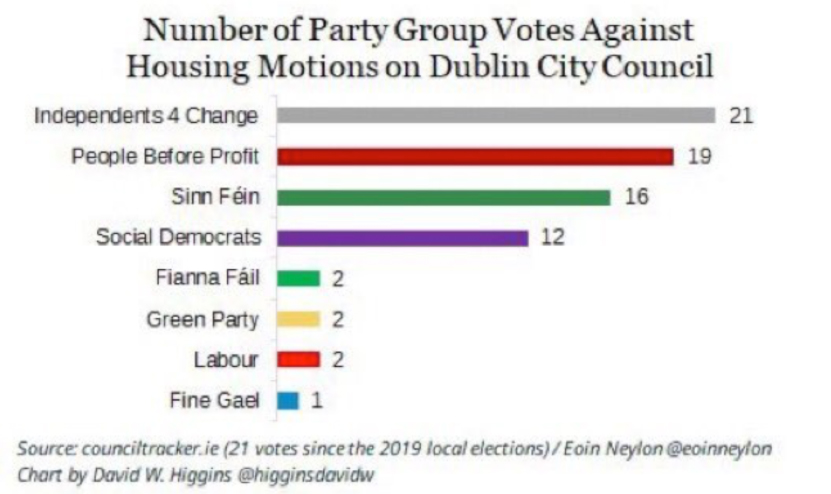 For example, most Sinn Féin councillors on Dublin City Council voted against 12 of a series of 16 rezoning proposals on March 10, 2020 which constitute the bulk of the 16 votes against moving ahead with housing builds since May 2019. How can the housing crisis be resolved if houses are not being built?

Interestingly, they supported the City Council management on a key vote on the same day, which upheld the overall plan to rezone so-called brownfield industrial sites to residential.

One of the main targeted rezonings not specifically referred to in that plan is to build over 2,000 housing units in north Finglas. This has already raised opposition from long term residents in the area who have voiced their concerns over the impact which this will have on the demographics, employment and community sustainability of a working class area that has in the past not benefitted from city council “planning.” It will be interesting to see what stance Sinn Féin adopts if that opposition gains traction.

Others critical of Dublin City Council management on housing issues tend to treat each rezoning proposal on its merits, rather than apply a blanket opposition as Sinn Féin are now doing. Nor did Sinn Féin have any problem with most similar rezonings in the past.

A good example of the change in Sinn Féin tactics, as opposed to any sort of guiding principle, is when left councillors proposed a motion on the mixed public/private development of St. Michael’s estate, O’Devaney Gardens and Oscar Traynor Road in November 2018. The left put forward a motion which described the private housing section of the construction (which was being supported by Sinn Féin and others) as putting homes “out of reach of the majority of working households.”

All Sinn Féin councillors except one voted with Fine Gael and Fianna Fáil to oppose that motion.

Yet, this year, when Sinn Féin opposed a recent Fingal motion on a Donabate development which will include 40% social and affordable housing, Sinn Féin Councillor Ann Graves claimed that she was opposing the housing proposal because she did not believe that it would “deliver genuinely affordable housing for working people.”

Which is party policy then? Sinn Fén voting against housing in Donabate and giving the reason that it’s not ‘genuinely affordable for working people’ – or supporting housing on Oscar Traynor Road which the left claimed was ‘out of the reach of the majority of working households.’?

Is it the case that Sinn Féin will only support the housing proposals that suit them politically? And meanwhile, houses are not being built for families who desperately need them.

Recently, Sinn Féin TD Dessie Ellis voiced his opposition to an apartment complex at Charlestown, Finglas on the grounds that there were inadequate local facilities to cope with the increased numbers of people. Yet, when Dublin City Council voted on a similar project at Scribblestown in December 2017, all of the Sinn Féin Councillors supported it.

That was despite strong local opposition on similar grounds regarding lack of facilities and the significant impact on existing housing and green space. The same volte face can be seen from other votes on housing developments in the city council area. Sinn Féin initially supported projects like O’Devaney Gardens – but then voted differently after their election defeat.

Before the 2019 vote, the party’s whole spiel was to cast themselves as being responsible and a safe pair of hands. In the north, under British sovereignty, Sinn Féin are happy to engage in Public Private Partnerships, as indeed they were in Dublin before 2019. When that didn’t garner the party any credit, and as the housing crisis deepened, Sinn Féin just reverted to blanket opposition to housing proposals.

Delaying or blocking the building of houses while castigating the government for failing to provide homes is the equivalent of winning a penalty kick, given the perceived incompetence of the current government and most local authorities, and the growing anger at the housing crisis.

Sinn Féin, no more than any other party, will not allow such an opportunity to benefit from that anger to slip by. Look at what Fianna Fáil did over water charges. Follow the crowd.

Sinn Féin’s own housing proposals look impressive only by default. Neither their published policy, nor the much vaunted book by Eoin Ó Broin TD, provide more than a vague notion as to how they will supply all the houses promised.

Nor do these plans they fit in with any overall perspective on where the country is headed under the direction of global forces that Sinn Féin has no issue with – such as mass immigration and the demand for homes that will ensure.

Of course, many parties – particularly those who pose as radical alternatives – behave differently once they have power. In Sinn Féin’s case that has been proven not only by their period of dominance on Dublin’s local authorities, but also in the north where they have been enthusiastic supporters of Public Private Partnerships and Public Finance Initiatives.

Either a housing proposal is viable or it is not. That ought to be the only criteria. For Sinn Féin, however, it is clearly all predicated on whether allowing housing to go ahead gives a political advantage. Likewise their current concern for the types of accommodation contradict their record on Dublin City Council prior to 2019.

In 2015, for example, most Sinn Féin Councillors opposed two motions which sought to impose a minimum floor area for one-bed apartments. Some of the same people are now attacking such apartments as inadequate. Again, either small floor space is inadequate or it is not.

Now Sinn Féin realise that almost by accident, Fine Gael and Fianna Fáil handed them a massive boost in the 2020 general election by their failures on housing. All the Shinners have to do now is attack that record and make vague promises of building tens of thousands of houses.

Many people forgot their actual record and they are once again in a prime position to capitalise on housing and other issues simply by embracing rhetorical leftism which bears no relation to how they behave when in power.

Unfortunately, as with the citizens of Dublin, it is possibly another learning curve that will need to be crested before the penny drops.