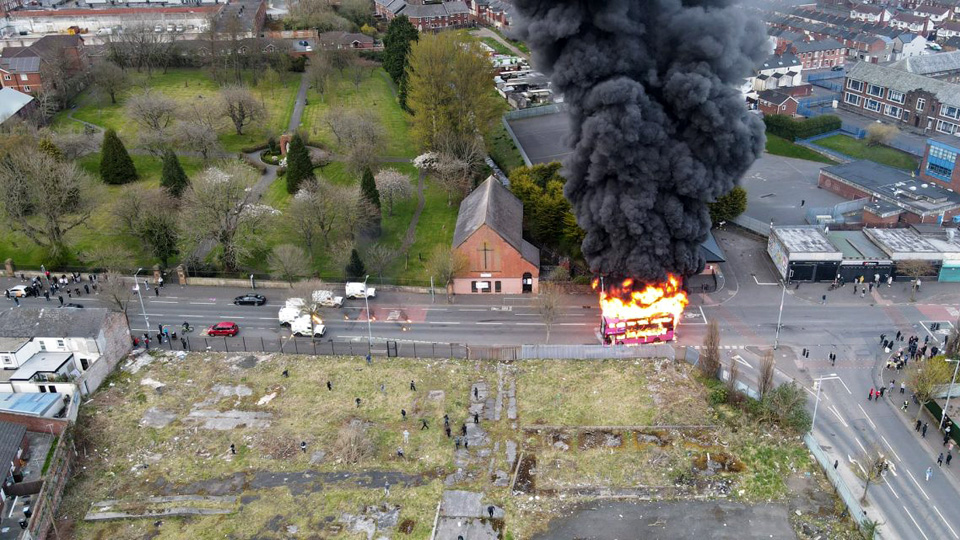 The last few nights of loyalist violence should act as a wake-up call to those who think Irish Unity might come about peacefully.

As the media and politicians rummage around for reasons as to why rioting has kicked off again in Northern Ireland, most of the young men torching buses, cars and police vans go about their nightly duties blissfully unaware of the finer Brexit details that have some loyalist activists worried about the strength of their ties with mainland Britain.

They have responded to the relatively slight political instability caused by the EU and Brexit with fire and fury, drawing a line in the sand that has made clear to everyone their intolerance for any small changes.

The young men lighting their rags and throwing petrol bombs through glass windows aren’t going away either, you know.

They listen to a chain of command rising through loyalist communities, where hardened paramilitary men (on both sides) tell the youngsters how to respond.

So step into their shoes and consider the much larger, existential threat to British loyalism posed by the idea of uniting the north and south of Ireland.

I would suggest that the rioting currently engulfing parts of Belfast is nothing compared to what loyalists would muster when realistic talks about a vote on Irish Unity begin.

I’m all for a united Ireland, even though so much about the current republic makes me ashamed of what we have become and can offer.

Nonetheless, for those of us in favour of Irish unity, there will be days of reckoning when the middle ground calculates the carnage that can and probably will unfold, and asks the reasonable question: is it worth it?

If lives are going to be lost again in this centuries-long battle for control of Ireland, those floating voters who could be deterred from supporting a united Ireland will naturally dread the thought that such violence could last for months before and after a vote on reunification.

This real threat of bloodshed and mourning will have to be dealt with convincingly by the authorities in order to give the middle ground confidence in how their lives might look in a united Ireland.

Paramilitaries who plant bombs, as the people of Omagh, Enniskillen, Monaghan and Dublin know, only have to be successful once in order to make a statement.

I hope a return to violence can be avoided, but my own guess is that loyalist paramilitaries know they can defeat the ballot box by inflicting untold suffering on innocent communities.

The best hope of Irish unity campaigners could be that a generation intent on violence will be met with a generation determined to restore justice.

New footage shows moment loyalist rioters hijack bus in west Belfast.
One man can be heard shouting, ‘Tell the driver to drive it down… where’s the driver?’
Another shouts, ‘petrol bomb it’.
Rioter in driver seat releases brake before getting off. Bus seems to have free rolled. pic.twitter.com/FHKBTw59RS

Bad news from NPHET: We are at a “dangerous point”