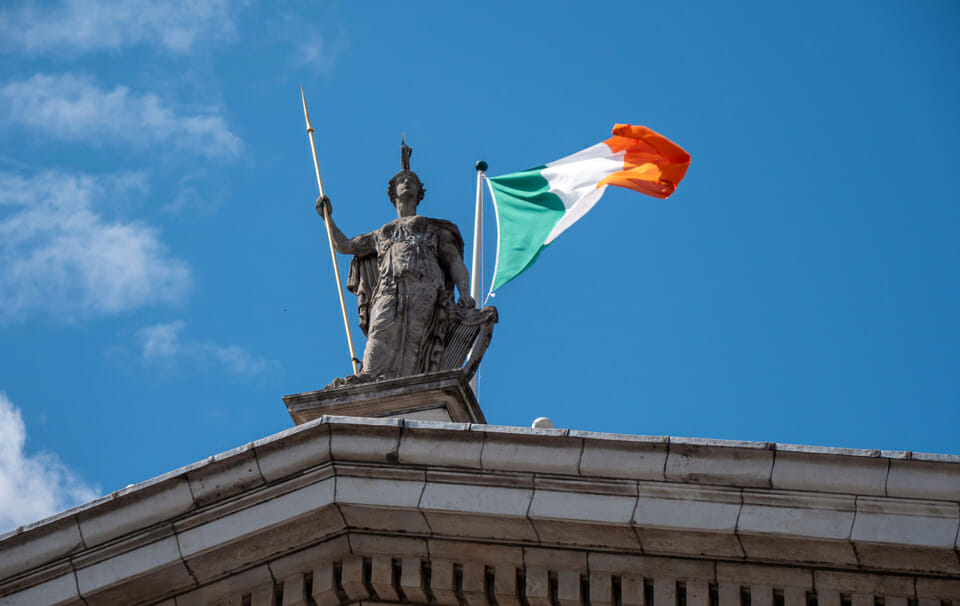 Ireland is progressing. It is moving from a dark, priest-infested isle into the light of modernity. That is what we are told. Day after day, week after week – the Irish media and political establishment assures us that as the hour hand moves forward so too does Ireland.

This is a lie. Possibly the greatest lie ever told to the Irish people, at least since the foundation of the Republic. The reality is that Ireland is in the grips of a severe political and cultural crisis. This is most readily visible in the breakdown of the country’s capacity to govern itself.

Consider the following chart. It shows the composition of the Dail since 1973. Each colour represents an independent entity – whether a party or a non-affiliated TD. 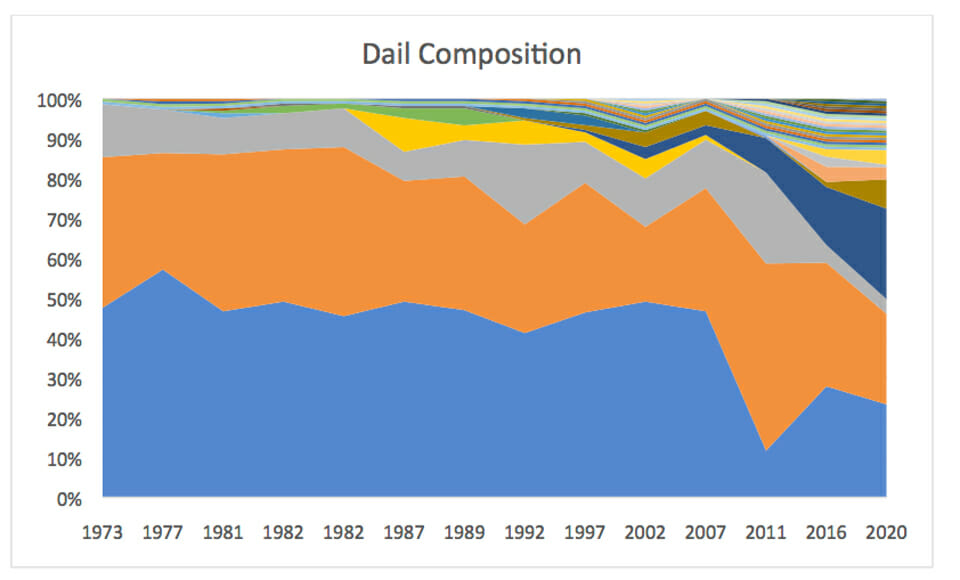 What do we see? We see that Ireland has gone from being a stable democracy in the 1970s and 1980s to an ungovernable mess today. A country this fragmented is barely a country at all. It is merely a geographic entity falling into terminal decadence and decline.

The Irish people know this intuitively. In spite of all the talk about progress on social issues most people are acutely aware that the hospitals do not work and people lack housing.

Governments should be primarily ensuring that life is livable for the people that they govern. But recent Irish governments have been unable to do this and so they have been covering this up by foisting divisive ‘cultural debates’ on the country and calling it ‘progress’.

These are the actions of an extremely decadent ruling class; one which sows division in the population and wages culture war to cover up its ineptitude and lack of capacity for leadership.

Why has this happened to Ireland? There are long-term and short-term forces at work. The key long-term force is the dissolution of Irish culture by our ruling elite. Ireland is and has always been a Catholic country. Irish history makes no sense without reference to Catholicism. No matter what modern Marxist anti-imperialist historians will tell you, the foundation of the Irish republic was a response to the English Reformation and the persecution of Catholics under the Penal Laws.

Remove Catholicism from Irish culture and you are left with a few plastic leprechaun statues sold to American tourists. The impact of the dissolution of Irish culture on the population has been profound.

No one ever talks about it, but no matter where one looks the sociological statistics have drastically declined as Ireland has ‘secularized’. It is true that the country has gotten richer and the economy has improved. But almost every non-economic variable has declined.

Since 1960 the murder rate has increased fivefold; suicides have increased sevenfold; divorces have increased forty-sevenfold; drug-related deaths have risen twelvefold; and alcohol consumption has risen threefold. This is not progress. These are the symptoms of long-term social and cultural decline. The fact that people have more money in the bank means little in the face of these statistics, which show a dramatic decline in the quality of life.

The short-term causes of the political fragmentation are easier to diagnose. The clue is in the fact that the fragmentation picks up pace after 2007.

In the 1990s and 2000s the Irish ruling elite covered up the long-term decline in Irish culture and society by touting the success of the Irish economy. After the housing market collapsed and the banks were bailed out this narrative suffered a severe blow. This was compounded by the takeover of the Irish government by the Troika.

This had two effects. On the one hand, the Irish people lost faith in the political parties – hence the explosion of independent TDs. On the other, the Irish ruling elite became acutely aware of their own inadequacy. They lacked a legitimation narrative. So, they increasingly turned abroad – especially to America and latched onto divisive liberal political fads.

Together these forces are driving the country to ruin. It is already ungovernable. With the coronavirus epidemic and the stock market collapse, Ireland probably faces another recession. Under the Maastricht Criteria rules that means more austerity – which means the housing and hospital crises will get worse. Radical neo-Marxists in Sinn Fein are in the ascent.

If something does not change drastically, this situation will eventually implode. What form that takes is anyone’s guess. But things could get very bad, very fast.

What is to be done? A new populist realignment is needed; a political program that fuses interventionist economic measures with social conservativism. This is the force that is sweeping the world right now and it needs to come to these shores.

Economic intervention should aim at fostering family formation. Young people are not getting married and having children in sufficient numbers. Some of this is cultural – these are the first children of the culture of divorce we foolishly and selfishly introduced in the 1990s. But some of it is financial; having a family in contemporary Ireland is enormously expensive.
We should look to Hungary and Poland who have allocated anywhere up to 4-5% of GDP to providing massive incentives for families. Similar, even more comprehensive programs are being discussed in the United States.

Lack of family formation leads directly to social and political instability. A person who works nine-to-five and ‘lives for the weekend’ does not have a stake in society. They will be willing to gamble by voting for radical parties. They will also find themselves lonely and dissatisfied as they age and will turn to the politics of grievance and resentment.

Social conservativism should be proudly and loudly proclaimed. Social conservatives should stop arguing  on the terms of cultural liberals. They should point out the decadence of their ideas and their lack of ability to govern. They should deplore their lack of patriotism and their insidious Europhilia. A significant portion of the Irish pubic will respond to this message.

The media will attack the politicians who do this, no doubt. But what we have seen in other countries is that when politicians and the media go head-to-head on these issues, the media loses and discredits itself. Many outlets are on the brink of bankruptcy anyway, as the internet steamrolls over their business models. This should be encouraged as the fourth estate has become decadent and corrupt. Anti-patriotic state media should have their license fee scrapped – an antiquated arrangement in the age of internet anyway.

We can build this coalition. But it must be built fast. The country is barely governable. In ten years, it could be close to chaos. The time to act is now.

Is the EU’s vaccine cock-up a blessing in disguise for Dublin?