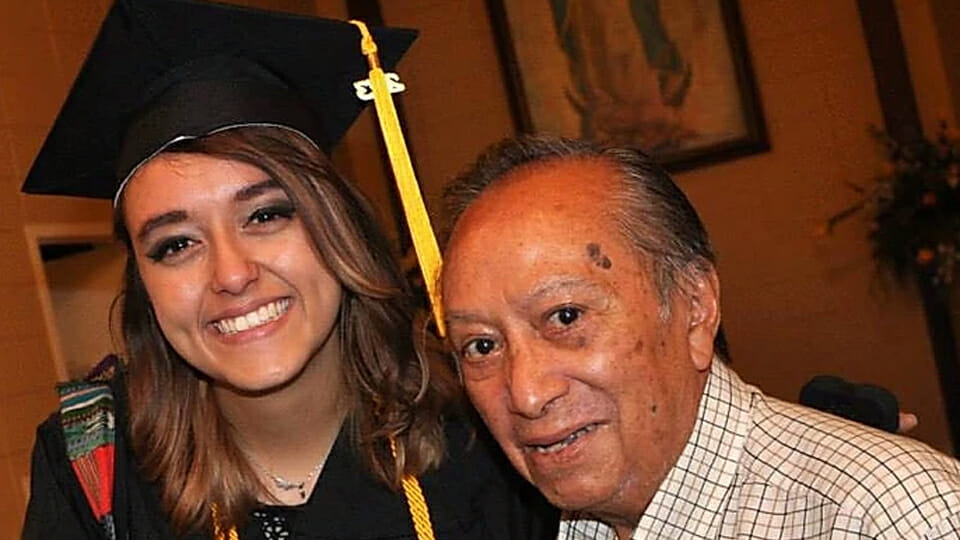 The author and her grandfather

I’ve been reflecting on the care and love my grandfather received at the end of his life. He passed away barely a week ago, with two of his daughters (my mother included) at his side, after living a full 84-year life.

He was an ambitious man, a photojournalist who forwent family life to travel the world. He documented popes, princes, and presidents. He was always searching for the perfect shot. He was witty, charming, and proudly independent — until he wasn’t. A Parkinson’s diagnosis put a halt to his fast-paced lifestyle, and as his illness progressed, it eventually forced him to rely on the family he’d left behind.

A decade and some change ago, my grandfather moved into my parents’ house. I was a preteen at the time. His ex-wife, my grandmother, an iron-willed matriarch who had raised their three children alone, was already living with us, too — in the room across the hall from his. I used to throw that out as a fun fact to friends, almost like a joke: “Yeah, they could make a sitcom out of my grandparents’ life. Married and divorced to each other multiple times, and now they’re divorced and living across the hall from each other! How about that!” It certainly made for an interesting dynamic.

I want to be clear that in writing this, I don’t wish to air my grandfather’s dirty laundry or to speak ill of the dead. I loved him, and he loved me and all his family members in his own way. I am grateful that I had so much time to get to know him and that I inherited his love of photography. But through living with him, loving him, and helping my family take care of him, I learned some valuable lessons, and I hope that sharing my perspective can help others.

One of the most important lessons I learned is how society tends to categorize the elderly and all people with disabilities into one of two stereotypes: angels or burdens. Like most stereotypes, both are harmful and untrue. The first is harmful because it infantilizes them, treating them as purely innocent creatures who exist solely to bring wisdom or joy to the able-bodied. It turns them into a means to an end, and it sets a standard that is impossible to achieve. The second stereotype, that they are mere burdens, emerges when they are inevitably less than perfect. They get reduced to being defined by their needs instead of their humanity; they are treated as drains on time, money, or energy. Their caregivers are hailed as saints for doing the bare minimum, or worse, excused for committing violence against them. In reality, the elderly and disabled are not angels or burdens, they’re people — and people are complicated. People are imperfect. Loving people is difficult, no matter their ability level. But ultimately, loving people is what we are called to do. We are all human; our shared humanity demands that we respect the dignity of other human beings and care for those in need.

An article recently published in The New York Times, titled “Sweethearts Forever, Then Came Alzheimer’s, Murder, and Suicide,” is a particularly heinous example of these ableist stereotypes being used to excuse filicide. In the piece, author Corina Knoll romanticizes the story of a husband who murdered his wife when the progression of her Alzheimer’s became unbearable to him. Knoll paints this act of violence as a tragic act of love. But killing isn’t love. Murder isn’t merciful. Upon reading this article, I couldn’t help but get angry when I compared Knoll’s idea of love — a husband murdering his wife of sixty years — with the love I saw at home: my grandmother cooking meals for her ex-husband, feeding him when he couldn’t feed himself, helping him shuffle around the house and get in and out of bed.

I won’t deny that caregiving is difficult, but the discomfort of caregivers can never outweigh the right to life of people with disabilities. Every person, no matter their level of dependency, deserves to live free from violence. I believe they deserve family or friends who will love them enough to make the sacrifices necessary to keep them as comfortable as possible until their natural end. This sacrificial love, which I was lucky to witness in so many ways through the actions of my grandmother, mother, and other family members towards my grandfather, upholds human dignity. This sacrificial love, surely, is what leads to a good life and a good death.

Author’s note: I recognize that I’m an outsider to the disability community as an able-bodied person, so I don’t wish to speak for them in any way. These reflections are inspired by my experience with my family, and I’m open to correction if anything I’ve written offends.

This article was written ahead of March 1st, the Disability Day of Mourning, a day when the disability community remembers the lives of people with disabilities killed by family members or caregivers, and posted on Rehumanize International.

CAPITALISM FOR THE POOR: Christine Soule on her journey from drug-addicted stripper to Christianity