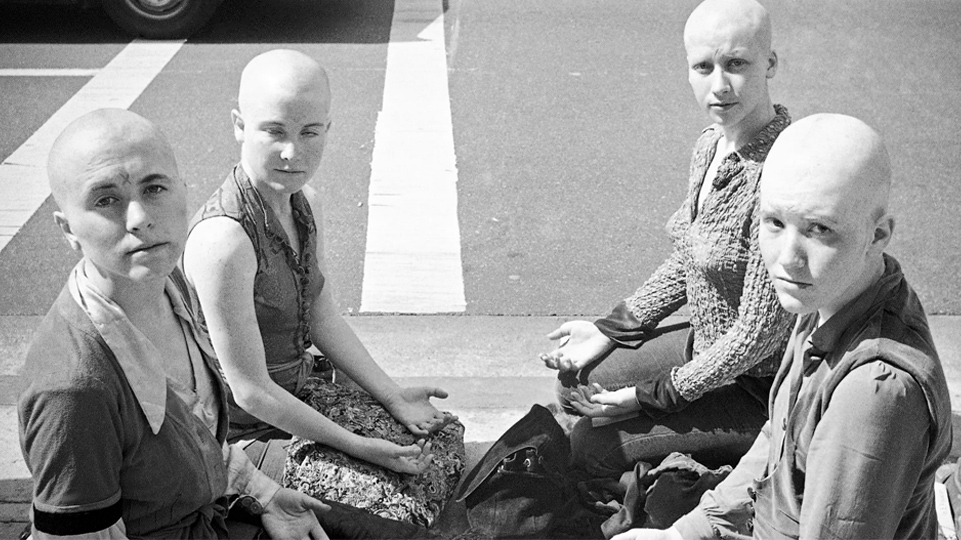 From left: Cathy Gillies, Kitty Lutesinger, Sandy Good, and Brenda McCann, of the Manson Family, kneel on the sidewalk outside the Los Angeles Hall of Justice on March 29, 1971. They kept a vigil throughout the trial in which Manson and three women were convicted of slaying actress Sharon Tate and six others. Photo Credit: Wally Fong

Fifty years ago, on September 26 1970 to be exact, a huge fire destroyed over 100,000 acres of woodland in northern California, destroying a property known as the Spahn Movie Ranch:

The “Manson girls” were the surviving members of The Family, the followers and killers who were part of Charles Manson’s plan to ignite a race war. He was on trial in September 1970 at the Los Angeles Hall of Justice for the grisly murders of actress Sharoand four others in August 1969. During the trial a former Family member Danny De Carlo told the court that Manson wanted to set the blacks at war with the “pigs” and the “white establishment” and that the Pigs “ought to have their throats cut and be hung by their feet.”

Fifty years on, wild fires this year have already destroyed over 5,000,000 acres in California, Washington state and Oregon. There is evidence of arson which adds to the fears engendered by the on-going violence of the ultra-left although there is no evidence that the wildfire arsonists are part of any organised effort.

More resonant of those mad days of half a century ago is the clear attempt to spark Manson’s race war, which is not always appreciated by those who are supposed to benefit from it.

Then as now, the white leftists want to “shit on other people’s doorsteps,” as one Harlem woman told some NYU rioters who had decided to show some solidarity by attacking local businesses. A South Chicago woman told those who had attacked her business: “You are tearing us down.”

It also leads to some rather surreal confrontations between actual black people and their white middle class patrons.

Then, as now, there was an amoral celebration of criminality. It would be difficult to imagine a more awful creature than George Jackson who was the icon of the far left in the early 1970s and who was described as “the meanest mother I ever saw, inside or out … he was into everything when I was inside. Dope, booze, peddling ass – you name it.”

One of Jackson’s Wolf Pack, Jimmy Carr who referred to the Panthers and others as “red criminals,” told of how they had murdered a Mexican gang member in San Quentin in a dispute over who controlled the prisoners who were pimped out to be raped by other inmates.

So it is perhaps not that strange that Charlie Manson became for a time another object of veneration. Jerry Rubin, who was one of the Chicago 7 who were charged after the riots at the Democratic Convention in Chicago in 1968, visited Manson in prison and in his autobiography gushed that “I fell in love with Charles Manson the first time I saw him on TV.” Embarrassingly for his red fan boys, when one interviewer suggested to Charlie that he was a political prisoner just the same as Huey Newton of the Black Panthers, Manson said that he had never heard of him.

The leading “underground” newspaper in Los Angeles, Tuesday’s Child “The Voice of the Yippies,” named Manson as its ‘Man of the Year’ for 1970.

Bernardine Dohrn,  a future political ally, along with her husband Bill Ayers, of the Obamas, and Black Lives Matter supporter, Bernardine Dohrn launched the Weather Underground at New Year’s 1970 in Flint, Michigan.

In her speech Dohrn, who is now bizarrely vice-chairperson of the Children’s Rights Division of the Human Rights Watch NGO, celebrated the Manson Family’s murders. “Offing those rich pigs with their own forks and knives and then eating a meal in the same room, far out! The Weathermen dig Charles Manson.”

As Bryan Burroughs, author of Days of Rage described, Dohrn’s tribute was taken up by the audience: “Soon everyone in the hall was raising their hands in four-fingered salutes, signifying the fork shoved into the pregnant Sharon Tate’s belly.” One of the Weather Underground New York cells was called Fork in a similar vein of admiration.

As creatures such as Dohrn and Ayers have crept back into bourgeois respectability, blaming any “crazy stuff” on the Vietnam war the “long march through the institutions” has been partly realised. They now dominate the politics of the Democratic Party in a manner only dreamed of by the Communist Party infiltrators of the 1940s.

Whatever ideas the Democrat leadership might have that they can control the far-left in the same way as the Junkers thought they could manipulate the Nazis, the far-left in the party knows exactly what it is doing. Its intellectual nihilism has become translated into open support for rioting and violence directed against the police.

Stoking up racial animosity has been part of their playbook for some time, so the extension of that into open conflict is a logical progression. They are not stupid enough to believe that all of this will lead to some revolutionary triumph – all they want is to defeat Trump – but they are cynical enough to exploit it.

Had Manson’s project come to life fifty years later, he might have been another sociopathic poster boy for the Elect Sleepy Joe campaign. Back then Democrat mayors and police chiefs beat the rioters off the streets. Now they are partly banking on them to put their doddering Von Hindenburg into the White House.