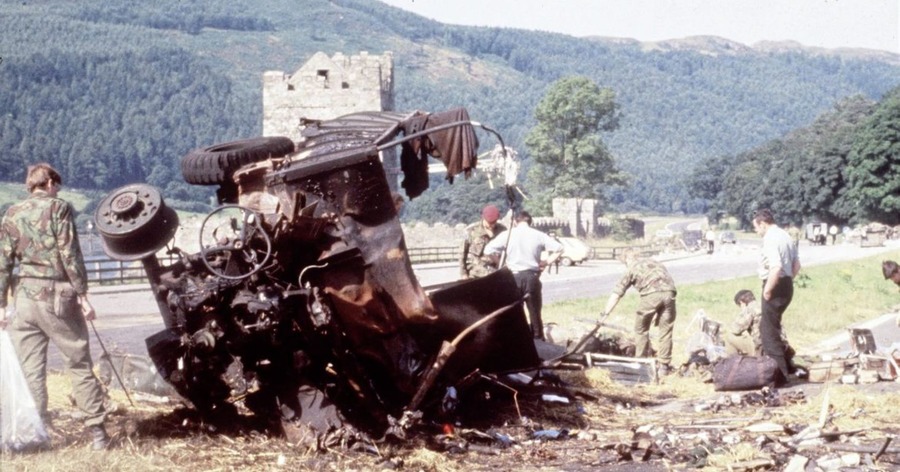 What’s the world coming to when a senior Sinn Fein TD can’t even gloat about the deaths of 18 young men without people getting all upset?

Sinn Fein TD Brian Stanley was all in favour of praising the Warrenpoint ambush just two days ago. But now? Mary Lou has had a word, and Brian is…. very sorry:

Ms McDonald said: “I’ve spoken to Brian and he is very, very apologetic, he understands fully that the tweet was ill-judged. It was an attempt to draw an historical parallel between the Auxiliaries and the Parachute Regiment but that’s neither here nor there, the tweet caused upset, it caused offence and unnecessary controversy and for that he has apologised.”

Asked how he would be disciplined, Ms McDonald told RTÉ Radio’s Morning Ireland: “He has apologised and he has withdrawn the tweet, that’s the most important thing for me. Secondly I feel absolutely certain that I can assure you that this was a singular, one-off mistake by Brian Stanley and one that will not be repeated……

….On Saturday, the Laois-Offaly TD tweeted in reference to the Kilmichael Ambush in 1920 and the Narrow Water Massacre in Warrenpoint, Co Down in 1979, claiming they were “the 2 IRA operations that taught the elite of d British army and the establishment the cost of occupying Ireland. Pity for everyone they were such slow learners”.

Niamh will have a piece coming later on today about the British Government’s highly questionable (her words might be stronger) decision not to initiate an inquiry into the murder of Belfast solicitor Pat Finucane, which is widely believed to have involved collaboration between loyalist paramilitaries and the British security forces.

The basis for demanding such an enquiry is, reasonably, that it is quite hard to heal the wounds of a conflict when one side refuses to take responsibility for its actions during that conflict.

But by that same standard, how can we ever hope to heal the wounds of that conflict when we have senior elected politicians cheering on the brutal and calculated murder of 18 young men whose only crime was to be sent to Northern Ireland by their employers?

And if Stanley really does believe that the Warrenpoint Ambush was a great day for the parish, or whatever, why is he apologising? Has he changed his mind? And if he has changed his mind, what changed it?

More to the point, what are the prospects for unity on this island when we have senior politicians who apparently sincerely rejoice in the shedding of blood?

It’s not especially surprising that Stanley – who’s old enough to have been an IRA member at the time – might have held the view, during the conflict, that the Paratroop regiment were a legitimate target, who had it coming to them, especially after the events of Bloody Sunday.

But someone truly committed to peace and reconciliation – which we’re supposed to believe Sinn Fein to be – would surely recognise that every life lost in the conflict was a tragedy, on both sides. You don’t regularly hear senior British politicians, for example, talking about how proud they are of the bombing of Dresden. You don’t hear Fine Gael politicians talking about how effective the free state forces were during the Irish Civil war.

This kind of triumphalism is poisonous to the cause of Irish unity. It hardens the hearts of those determined never to allow the nationalist cause to succeed. Not only in the unionist community, but amongst those of us who are frankly ashamed that such butchery was carried out, allegedly, in our names. It’s easy to forget – and it seems that Sinn Fein want us to forget – that the present constitutional arrangements in Northern Ireland owe far more to the work of John Hume and the SDLP than they do to those who had to come to the negotiating table only after their military campaign had singularly failed to dislodge the British presence, which remains to this day.

It’s worth wondering, for example, what the reaction amongst Sinn Fein TDs and supporters would be if, say, Sammy Wilson or Nigel Dodds had tweeted that the Dublin and Monaghan bombings “taught the irish state the cost of meddling in ulster. Pity they were such slow learners”.

Would an apology be enough, in those circumstances, or would Brian Stanley and his leader be on the radio demanding much tougher action?

Figure that one out yourself.