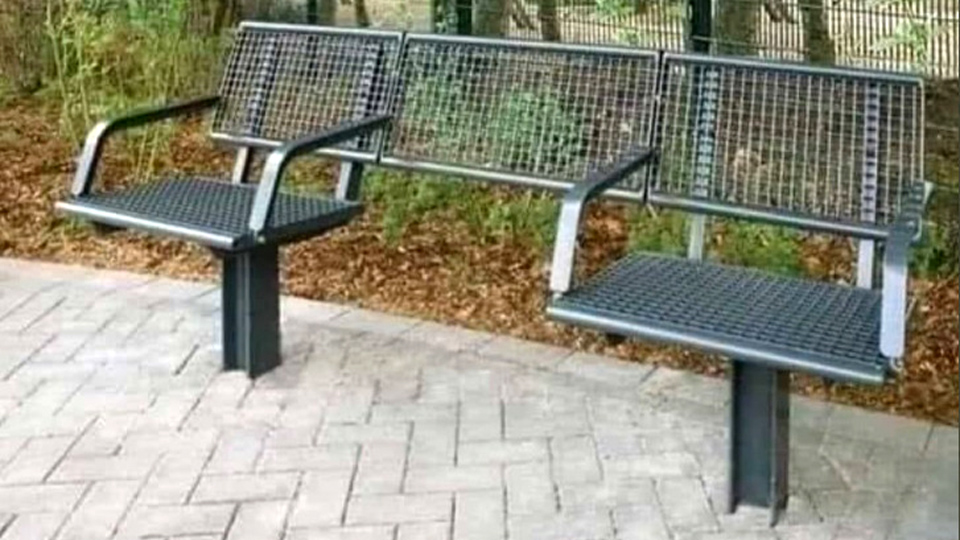 We will put this in the category of “darkly amusing”:

I have requested @GalwayCityCo to introduce a number of these wheelchair accessible seats around Galway.

You might wonder why a “wheelchair friendly” park bench is something that anybody would bother to invent. After all, people in wheelchairs – not through choice, of course – are not lacking for somewhere to sit down. Life has forced them to take a permanent seat with them everywhere they go. That is why it is called a “wheelchair” after all.

Why would it make sense to sacrifice seating space on a bench for others, when the person with the wheelchair can simply park alongside the bench to talk to their friends, or wheel it around to face them? It would not, of course, and that’s not the point of these designs.

The point, if you look at those designs, is that you cannot sleep on them. They are part of what some people call “anti-homeless architecture”. The theory being that, just as you can discourage birds from nesting in your chimney by putting one of those anti-nest devices over the top, so you can discourage homeless people from blighting your park if you make the benches unattractive to them.

This is not a new trend, of course: We have had anti-homeless architecture, designed to deter rough sleepers, for years:

Anti-homeless architecture is one of the most heartless and insane things humans has ever created. pic.twitter.com/4FpNcl5XZA

Most of us, of course, do not see the world from the perspective of a homeless person, and never quite notice these innovations in architecture. When you do see them, it becomes very hard to argue with the tweet above.

What is interesting here, though, is this: did Councillor Higgins really not know any of this? Did she genuinely think these designs were intended to accommodate wheelchair users? Was it, in other words, an honest mistake, or a terrible, insidious bit of spin?

My own view, in honesty, leans towards “honest mistake”, for the reason mentioned two paragraphs above: Most of us do not see the world from the view of a homeless person, and do not notice these things. It is probable that she simply did not consider any other potential reason for a park bench design like that.

In itself, though, that does tend to validate the number one criticism most people have of Fine Gael: That it is an out of touch middle class party, full of people who simply cannot comprehend the struggles of people most like them. How can you make the world easier for homeless people, for example, when the difficulty of finding a place to sleep does not enter your mind? You can extend that basic problem to any number of statements politicians make about homelessness, health, or even lockdown. Cllr Higgins does not see the world as a homeless person does: Do we think, then, that Leo Varadkar sees the world as a small business owner during lockdown does?

In any case, those bigger questions aside, architecture like this is appalling, and should be banned. If people are sleeping rough in large numbers, then that is a societal failure. Only an especially cruel society would look at their plight, and dream up ways to make it even harder.