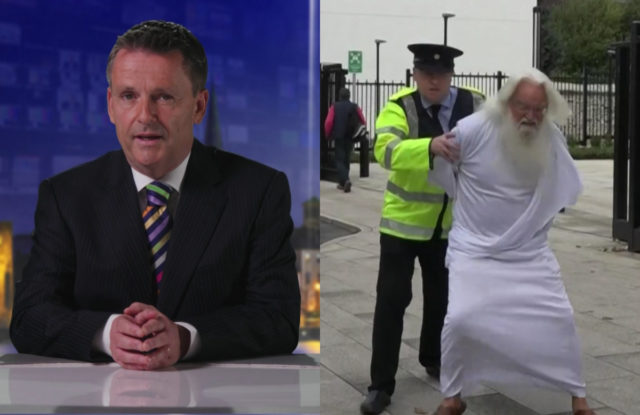 RTÉ must air the Broadcasting Authority of Ireland’s decision to uphold a complaint that its New Year’s Eve show “effectively accused God of sexual violence and sexual crimes.”

Documents seen by Gript.ie confirm that the Compliance Committee of the BAI have decided to uphold a complaint made by Mr. Ciarán Ó’Comain that a Waterford Whispers sketch broadcast by RTÉ, in which God was accused of having raped a Middle Eastern woman, was “highly offensive” and “predictably so.”

“To draw parallels with Islam, it would be akin to accusing Allah (Allāh) of rape and being jailed; a step above even insulting Muhammad,” the complaint summary reads.

“Moreover, the complainant maintains that if that clip had been a skit directed at the Black Lives Matter movement or towards the LGBT community, every person connected with that show would have been forced to resign.

“The complaint states that living in a democracy, with freedom of opinion and speech, must be countered by principles, by emotional intelligence, by a moral compass, and by judicious awareness and empathy. The complainant believes the sketch was unacceptable, inappropriate, and indefensible.”

Ó’Comain alleged that RTÉ’s apology following the broadcast was “ham-fisted and very qualified”, leaving the sketch on it’s “Player” and only removing it after receiving “thousands of complaints.”

The Compliance Committee maintained that the sketch did not comply with the provisions of Principle 5 of the Code of Programme Standards that allow for “critical scrutiny of religion, while also requiring broadcasters to show due respect for religious views, images, practices and beliefs in programme content.”

“The sketch in the programme effectively accused God of sexual violence and sexual crimes,” the decision reads.

“The Committee concluded that this treatment of a religious figure did not show due respect for religious views and beliefs and did not constitute critical scrutiny of religion.

“The Committee decided to uphold the complaint under Principle 5 of the Code of Programme Standards and the provisions of Section 48(1)(b) of the Broadcasting Act 2009, concerning offence.”

Mr. Ó’Comain had initially complained to RTÉ, but claimed the state broadcaster’s response to him appeared to be “a standard form type letter which essentially ignored much of my submission to them and so I appealed it to the BAI.”

The BAI’s decision is expected to be aired by RTÉ on Saturday before the 9 o’clock news.

“We must treat each other like pariahs”: STARK warning from Irish ICU expert on Coronavirus