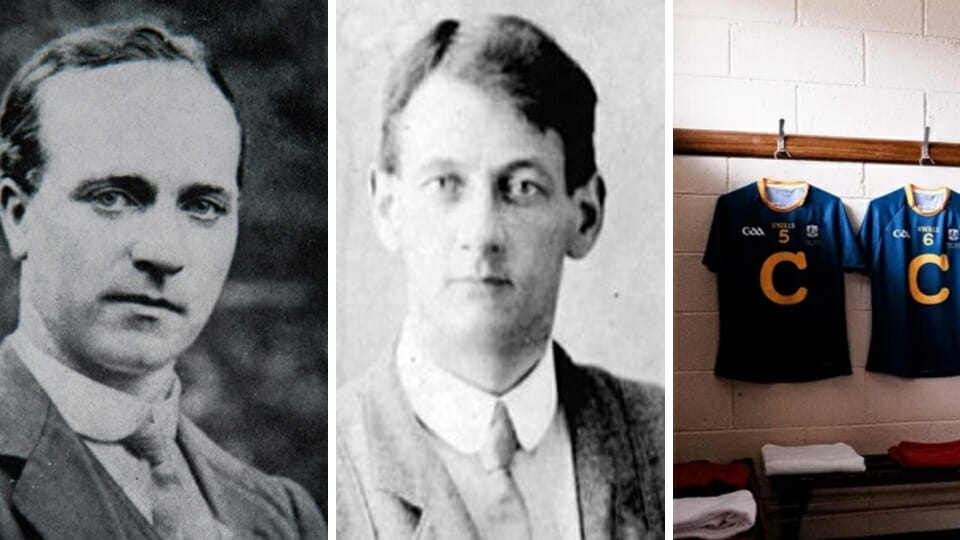 Tomás Mac Curatin, Terence MacSwiney, the Cork centenerary shirt for the 1916 rising commemorations in the original county colours of saffron and blue

The Cork senior hurlers and footballers will wear a black jersey for their next national league games to commemorate two former Cork City mayors who died in 1920.

The first of those was Lord Mayor Tomás Mac Curtain who was murdered by the Royal Irish Constabulary (who Minister Charles Flanagan sought to commemorate) at his house in Blackpool in Cork city on March 20, 1920. The RIC men who shot Mac Curtain dead in front of his wife and also ransacked the house.

His successor Terence MacSwiney, was imprisoned by the British government on charges of sedition and went on hunger strike in Brixton Prison where he died after 74-day hunger strike.

MacSwiney’s death was one of the pivotal events in drawing international attention and sympathy to the struggle in Ireland for the recognition of Dáil Éireann.

It is appropriate that the county which was the most formidable centre of resistance along with Dublin, Limerick and Tipperary should make such a gesture. It is also a reminder of the close connection between the GAA and the national political movement at that time. It also perhaps catches some of the popular support to commemorate significant events and figures which in 2016 shook off revisionist shackles which the political elite and the media and academic establishment sought to impose.

The Cork gesture is being proposed to be followed by at least one other county. Tipperary independent republican councillor Séamie Morris, and father of All-Ireland final hero Jake, has started a petition calling on the Tipperary county board of the GAA to commission a jersey to commemorate Bloody Sunday.

That was the day on which 14 people including Tipp player Michael Hogan were shot dead by British soldiers in Croke Park seeking vengeance for the assassination earlier that day of their key intelligence operatives by the Dublin Brigade.

Tipperary wore the colours of then county champions Grangemockler which was a white jersey with a green band. Curiously that was also the colours of Dublin champions O’Tooles who supplied most of the Dublin team but Dublin wore blue jerseys which of course has become the tradition ever since.

Tipperary and Dublin are to play a match in November to commemorate the event so it would be indeed appropriate were both to use the same colours as on that day. It will be interesting to see if the Tipperary and Dublin county boards follow the example of Cork.

Divine Mercy movie back in cinemas by popular demand in December